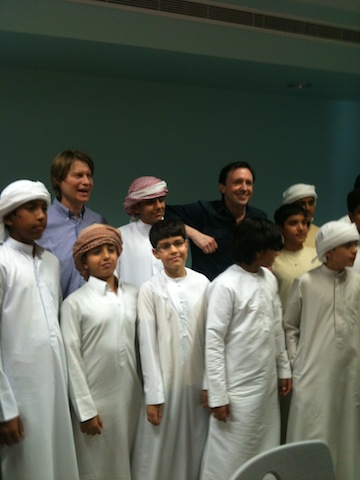 “My intent is to make Sharjah a second Bologna in the Middle East.”

Although often unfairly shadowed by the glamorous neighboring emirate of Dubai, Sharjah, shone this past week as it played host to an impressive list of publishers, authors and educators who all took part in the Sharjah Children’s Reading Festival. Sponsored by Sharjah’s Department of Culture and Information, the festival allowed first-time visitors such as myself an insight into the world of Middle Eastern publishing, as over 200 publishers from throughout the region displayed their wares to large crowds eager to stock their children’s bookshelves.

Along with book buying, adult attendees had the option to enjoy a wide-range of cultural programs, including panel discussions on topics ranging from “Animal Tales: The Moral and Meaning,” to “Arab Children’s Literature Critique,” “Teaching and Educating; Synergic or Conflicting,” and “Children’s Tales Compared to Nations’ Concepts.” For children there were workshops ranging from calligraphy to clown theater, origami to book making, and traditional and interactive storytelling.

Live Cultural Exchange, Award-Winning Translations and the Joy of Storytelling The show floor at the Sharjah Children's Festival

At the Mohammed Al Fatha School for Public Education, British authors Steve Cole (Astrosaurs) and Nick Arnold (Horrible Science) spoke to a group of eager students in the school’s robotics lab about science, imagination and the life of a writer.

Rose Prince, author of The New English Table, demonstrated the proper way cook spinach gnocchi to an audience unlikely to have ever seen gnocchi, properly prepared or not. For Prince, the demonstration was a way to bridge two cultures. “Parents might be here at the festival to buy their children books, but the children in the audience listen and watch quite closely, and there’s also a deep interest, I think for parents in seeing how a mother from another country uses her cooking skills.” Steve Cole and Nick Arnold discussed robotics with the children

The White Giraffe is author Lauren St. John’s debut title, and Kalimat acquired the rights from Orion Books, UK. Winner of the 2007 Calderdale Award, the 2008 Hounslow Junior Book Award, East Sussex Children’s Book Award 2008 and shortlisted for the 2010 Rebecca Caudill award, The White Giraffe is the first book to be translated into Arabic under the translation program of the Sharjah International Book Fair.

Commenting on the event, Sheikha Bodour bint Sultan Al Qasimi, Founder and CEO of Kalimat, expressed her delight at publishing the book: “Kalimat is very selective about the books we choose to translate. Translated by Jalal Hussein Al Khalil…the Arabic version of The White Giraffe is a good addition to the other books Kalimat has for teenagers, including the award winning Faten and Maskoon (Haunted).” Kalimat also announced the launch of The White Dolphinby Lauren St. John in an Arabic translation at the festival. At the panel discussion “Storytelling for Parents: The Joy of Sharing Books with Children,” Scottish author Janey Louise Jones and India’s Jeeva Raghunath, performance storyteller and author, made strong pleas to attendees to make storytelling a part of everyday life. Parents, they said, should tell stories throughout the course of their everyday life with their children, not just at a special set-aside time.

Tamer Said of Kalimat spoke with me about the challenges of publishing children’s books in the Middle East, challenges perhaps similar to those faced by publishers around the world: Children more interested  in video games than reading. Schools that seem to excel only in making reading seem like a chore, rather than a pleasure; parents who lack the time or motivation to read to their children, or who are unwilling or unable to purchase books and encourage their children to read; publishers unwilling to challenge the status quo.

Even so, Said is nothing if not optimistic about the future, both for Kalimat and for children’s Arabic publishing in general. A new generation of publishers, Said said, is emerging, and is eager to publish books of interest to young readers, to purchase and translate the best of contemporary western children’s publishing, and to offer their own books to publishers outside of the Middle East. Kalimat, he noted, currently translates 2–3 titles per year, and has sold more than thirty of its own titles to publishers in the UK, Italy, Sweden and Turkey. In addition, new ways of solving the problem of distribution within the region are being developed, including an online bookstore, as well as future ventures in e-books.

Lubna Nuwayhid, Marketing Manager for Lebanon’s Yuki Press, also bemoaned the lack of interest in reading among some young people (“I saw ten-year-olds buying coloring books!”) while also remaining optimistic about the future of publishing in the region.  Yuki Press is rapidly making a name for itself as a publisher unafraid of pushing boundaries, as is exemplified in its medical series of books introducing young readers to subjects that are often taboo in the region, such as autism. (Yuki Press will be the subject of a more in-depth report in the very near future.)

Ahmed Al Ameri, Director of Sharjah International Book Fair, spoke with pride of the success of this year’s festival and his hopes for its future. The children’s book festival, which used to be biannual, is now going to be held yearly, Al Ameri told me, opening each April 23rd. Al Ameri’s goal is to make a second  Bologna — a place where Middle Eastern publishers can display their best, where literacy and education can be promoted throughout the region and where publishers from all over the world can come to witness what a new generation of publishers is trying to achieve.

My take-away? This year’s Sharjah Children’s Reading Festival was a clear winner for publishers, participants and attendees alike. And with the UAE’s fascinating mixture of cultural interest and Western accessibility, its chances of becoming the Bologna of the Middle East seem to me to be a pretty good bet.