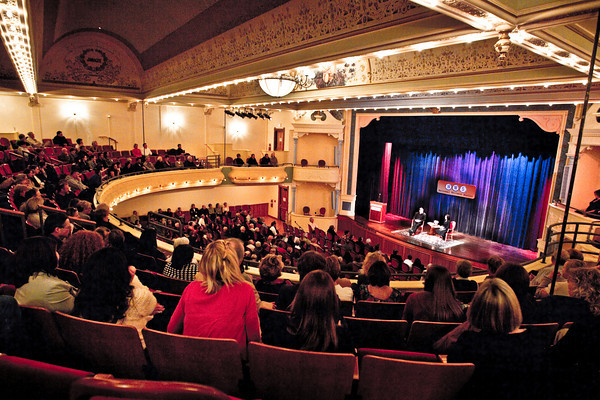 Traverse City is a bayside town of 15,000 people — the largest city in the 21 counties of northern Michigan. But the community has cultivated cosmopolitan appeal with a lively arts community that includes a major film festival founded by Michael Moore, the celebrated City Opera House, and an outsized literary culture heralded by the National Writers Series. NWS spotlights authors, journalists, and other storytellers in monthly one-on-one conversations that are successful enough to make northern Michigan a prime venue for any author’s book tour; it has been known to draw up to 700 people to events, charging $20-25 at the door (discounts for educators and students). At the same time, it spearheads a multi-platform media blitz for each visiting author. The current NWS season includes conversations with Jodi Piccoult, Alan Cheuse, Michael Sandel, Anna Quindlen, and Natalie Bakopoulos — more women are intentionally featured to balance the many male authors in last year’s line-up. Founded in 2009 by Doug Stanton, himself a bestselling author, NWS calls itself “a year-round book festival” that’s dedicated to enlivening the connection between readers and writers – even as some have left the book tour for dead.

Why Start a Writer’s Series? Stanton was himself on a book tour in 2009 when he noticed “dramatic changes” between it and his previous tour. “I asked around the country was working at book events…I heard that cookbook authors have the greatest success turning out audience, and it’s because they’re doing something other than reading and giving lectures.” He also learned that it costs about $2,500 to send authors to each city – which he understood to mean that each city needs to serve authors on what can be a long and lonely trip, both in terms of giving them a great turnout and the amplification that comes with media coverage.

Stanton got in the game promptly: he returned to Traverse City, set up at the kitchen table, and drew a logo. From the beginning the NWS angle was to put on stage a great interview with the author–one that is “really more like a conversation, a mind meld,” Stanton said. “When you engage the author as a human being, it really invites the audience to lean in.” They did lean in for the first event featuring Elmore Leonard that summer — and they kept coming back. Audiences were responding to what Stanton calls the “dinner party aspect” of the interviews, or “when the conversation turns surprising.” Accordingly, authors are advised that they shouldn’t feel like they need to cover everything while they are in stage. “We work really hard to create a moment on stage where authors are revealed.”

“It got much bigger much more quickly than I thought,” Stanton said. He added that NWS is not a day-job for him; he volunteers his time, though NWS now has a small staff.

As successful as the live events are, NWS is strategic in bringing the literary conversation into other platforms. It records events, and then broadcasts them on cable television and public radio; Stanton hopes to create a weekly syndicate out of this. Every author featured at NWS does three pre-event radio interviews, appears in print media, and is covered with Twitter and Facebook. “That comes free,” Stanton said. “As an author, I know how important it is. Authors appreciate us going the extra mile. They know that if no one hears you, the reality is that you stay surrounded in silence.”

Lit Life in the Flyover

NWS provides a detailed itinerary to each author for their stay in Traverse City, which culminates in their “evening conversation on the power of story.” The effectiveness of the strategy is evident: Stanton points to a “well-known author” who did an event in Ann Arbor, a notoriously bookish college town, where fifty people showed up. The same author went up north to Traverse City and found an audience of 450 people. “We sell it,” Stanton said. “All that media works.”

This comes, of course, as literary media has been painfully downsized. Book reviewers fired, radio producers fired … or doing three jobs. Stanton noticed all this from his own book tour experience.

“I don’t get that at all,” Stanton said. “More people are buying books than ever. They’re reading more than ever. People are hungry for this stuff.”

Straddling his lives as a writer and as the organizer for one of the nation’s leading literary series means that Stanton offers NWS authors unusual empathy as they work to sell books and connect with readers. But it also means that his own writing habits are changing – and not just because he has less time at the keyboard.

“I learned a lot,” Stanton said. “I learn from how (the NWS authors) write. It doesn’t get easier for anyone. (NWS) has made me a better listener, actually. I met authors I wouldn’t have met. Richard Ford was here — I’ve always been a fan. We formed a friendship I didn’t expect.”

Ford returns the compliment, calling Stanton an “extraordinary writer” who happens to be able to do the work of an arts administrator. He said that “socketed away in a rural, out-of-the-way place,” NWS curates a vivid literary culture that treats authors well and serves readers.

Marlena Bittner, publicity director at Little, Brown, sent David Sedaris to NWS (“he adored it”). She said NWS is revealing a market that publishers haven’t been connecting to.

“There’s an entire market ignored. Readers aren’t just in huge publishing cities,” she said. “There are certain core markets we go to again and again, and we very rarely diverge from that.” She said that her authors return regularly to Tattered Cover Book Store, a Denver bookseller, because they consistently have fantastic experiences there. But Bittner’s reminded of readers living in areas without a leading bookseller — including her own hometown in Pennsylvania, which lost its core bookshop when Borders closed. “But there are still readers there, intelligent people who want to engage with writers,” she said.

Not only is NWS offering a new possibility for readers, writers, and publishers to intersect, it’s doing so in a big way. Bittner is attuned with how the NWS “knows how to engage with the market once authors are there” with its coordinating media strategy and its reach for very large audiences in its City Opera venue. “They’re thinking in a bigger way,” she said. “In some ways, publishers are thinking in the middle, or smaller, because we hear all this bad news about nobody reading books anymore.”

Bittner is just pleased that NWS is offering happy news in what otherwise appears to be a bleak time for the book industry. “It feels like a joyous movement (in Traverse City),” she said. “This isn’t some perfunctory event. It’s exciting.”

Successful as NWS is, Stanton is reaching further. Reminded of his time as a student at Michigan’s Interlochen Arts Academy, and of the significance he felt in people “taking me far more seriously as a writer than I deserved to be taken,” Stanton is moving his vision into the public schools. After expenses, NWS is putting profits into a scholarship fund to connect students with the literary life. It is initiating the Front Street Writers Program this fall, offering two recent MFA grads $10,000 a year, plus housing, to come to Traverse City and teach a full-year creative writing class for public school students. Besides the literary practice, Stanton wants writers to “seem real and normal in our public school systems.”

It’s a populist move that leads Stanton to bring the language of social change to literature. “It’s not enough for the 1% of authors to be taking tours,” he said. “If that happens, we all retreat into the corner. Books should be in every hand on Main Street. Books should occupy public space. It’s time for us to re-occupy readers’ attention.”

Anna Clark’s journalism has appeared in The Guardian, The American Prospect, Grantland, and other publications. A 2011 Fulbright fellow in creative writing, Anna edits the literary blog Isak and is a writer-in-residence with the InsideOut Literary Arts Project in Detroit. She can be found on Twitter: @annaleighclark.