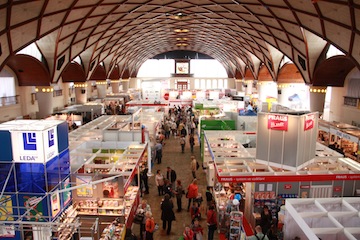 PRAGUE: “Everybody is crying, there is a drop in sales of up to 20%. There is a big problem with piracy as well as a big problem with the copying of textbooks. Nevertheless, for the first time in its history BWP was completely sold out,” said Director of Book World Prague Dana Kalinová, who is well aware of the multitude of difficulties facing the Czech and global publishing industries.

It seems logical that the success of a book fair would be tied to the economic strength of both the people who sell books and the people who buy and read them. Yet the indications from Book World Prague 2012 (BWP), which took place this past weekend, point to an ongoing and vigorous interest in the world of letters.

As baffling as this seems, Kalinová thinks that the fair’s growing reputation both at home and abroad might have given it a relevance that keeps exhibitors and book buyers coming regardless of the overall economy.

“I’m still trying to explain this to myself. Maybe it’s because the book fair is strong enough now from the media and promotional point of view, as well as in visitors and potential customers, that it represents a sales channel.”

Kalinová says that having such a successful fair during bad economic times is not wholly unprecedented. She recounted how at the outset of the current financial crisis she and other book fair directors received a letter from [Gabriella Adamo] the organizer of the book fair in Buenos Aires.

“She wrote us that when Argentina was in crisis and facing bankruptcy it was very hard for them to decide whether or not to organize their book fair that year. They decided to go ahead and it turned out to be one of the best and most successful in their history.” Nevertheless, Kalinová insists that BWP can’t become exclusively devoted to book sales but has to retain a rich and diverse program of events, readings and discussions. This year’s fair was a big success in this respect, as a large number of discussions and readings were standing room only. Besides, a strong literary program that draws people in should provide benefits to booksellers as well.

“If there is a really good program then publishers can be sure that readers will come and spend money on books. How much money they will spend is really hard to tell now.”

The difference between this year’s fair and last year’s (read our report here) can’t only be measured in numbers. With last year’s guest of honor being Saudi Arabia, Kalinová experienced a backlash whose vehemence she hadn’t expected. “It didn’t cause problems exactly, but there was lots of negative energy and I was quite surprised. I expected some criticism but not to such a high degree.”

What she found most frustrating was how there was little to no acknowledgement of BWP bringing in Arab writers and setting up panels on the issues of censorship and free speech. “Everyone was criticizing us but because the Saudis didn’t lift a finger to do anything in the program. We created all the forums on Arabic literature ourselves, and no one was discussing that.”

Around the Black Sea Gabriela Adameşteanu was among the Romanian authors featured.

With Romania as the guest of honor this year, the fair went much more smoothly, and that in spite of the collapse of Romania’s government less than a month before the fair opened. Romania has had a consistently strong presence at BWP and is strongly promoted internationally. To capitalize on the country’s higher profile, BWP made a program of writers from countries that, like Romania, border the Black Sea.

This meant that besides Gabriela Adameşteanu and a large group of younger, emerging Romanian writers the program featured writers from Bulgaria, Ukraine, Georgia, Turkey and — one of the stars of the festival — Russia’s Ludmila Ulitskaya. Having these writers speak together on panels devoted to their connection to the Black Sea exhibited shared aspects of literary and historical influence that even many of the writers participating in the discussion had never realized existed before. One of the highlights of the fair was a group reading of Black Sea country writers put on by Literature Across Frontiers at Prague’s Václav Havel Library.

Kalinová says that some of the countries and languages represented in the Black Sea theme are heavily under-published and she hopes the exposure and link to stronger and better represented literatures such as Russia and Romania would aid them in raising their profile.

Yet one area of consensus that arose from these discussions was that countries on the Black Sea look much less towards each other than they do towards larger Western markets. Kalinová says that even Czech publishers are looking west at the expense of their nearest neighbors.

“Romanian literature has potential on our market but I’m afraid publishers are more oriented towards Anglophone literature or other big literatures, and they aren’t so focused on countries like Romania.”

While BWP can’t redress this balance in one fell swoop, the sight of Czechs walking out of the fair with new translations of Romanian books shows that steps can be taken to broaden people’s literary horizons, even at a time when money is tight.

And as to why book fairs can do so well during economic downturns, Kalinová offers one more potential answer. “Why is that so, when there’s a crisis? Maybe people are looking for something in books. I don’t know, but I would like to believe that.”

DISCUSS: Do Books Have More Appeal During Tough Times?