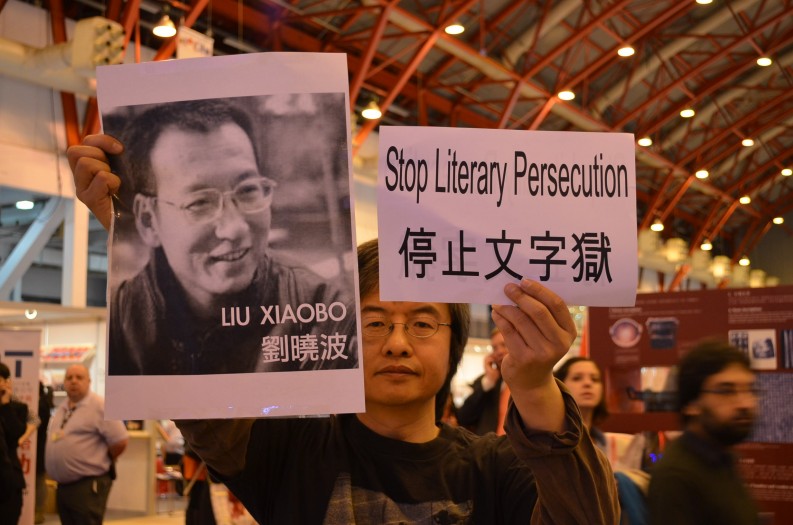 As discussed in today’s feature story, interest in Chinese literature and publishing is growing in the West — in particular as evidenced by China’s participation in the 2009 Frankfurt Book Fair, where the country was Guest of Honor, and this year’s ongoing London Book Fair, where China remains the Market Focus. Shao Jiang's quiet protest by the Chinese pavilion was allowed to go ahead and was filmed and photographed by many Chinese publishers until staff erected a wall of banners which prevented him being seen. Jiang was arrested in Tiananmen Square in 1989 and spent 10 years in prison.

Of course, as demand grows for news about China, the demand for books from China will grow. But, notes Abrahamsen, it’s a complicated business, requiring a high degree of knowledge of the culture and, often, context from which the writing originates.

If the potential of the Chinese program in London bears fruit and deals are signed for a hundred or two hundred new titles, will translators and the industry itself be able to meet the demand? And if not, as the publishing cycles slows, will this exacerbate the ongoing lack of first-hand knowledge of the Chinese culture in the West, when it is most urgently needed? And what of censored or dissident works? Will publishers with limited access to available, capable translators prioritize deals made with more traditional, i.e. state run publishers, as a consequence of the long-term business decisions in lieu of dissident originating from outside the country or even works that would have been otherwise censored by the Chinese state?