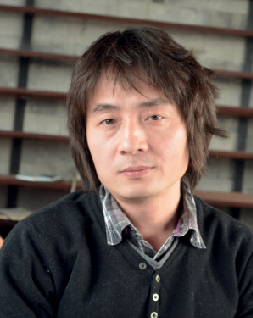 “When people hold some kind of power, they become enslaved by that power. When I became a writer, I began to think as a normal person again.” The quiet, thoughtful writer Ah Yi, who was among the speakers at a London Book Fair session called “Writing for a Digital World,” is something of a rarity in the literary world: a policeman who became a short story writer and novelist.

Born in 1976, he spent eight years in uniform in his native China — from 1994 to 2002 — and says that the events he witnessed have all influenced his work. “I saw some of the extremes of human behavior and had the opportunity to meet abnormal people. There was someone, not a local person, who killed seven people; there was a man who attacked his wife; and there was a bombing attempt on a bridge on the Yangtze river. All these things I’ve used in my novels. Working as a policeman gave me a deep understanding of human nature.”

Looking back on that time, he believes his views towards people and society were “very different as a policeman than as a writer. I became very institutionalized — you think through your uniform. When people hold some kind of power, they become enslaved by that power. When I became a writer I began to think as a normal person again.”

After the police force, he moved into sports journalism but soon tired of its ephemeral nature. “The writing vanishes — I wanted to do something more permanent.” He admits, though, that the 3,000-words-a-week pace was good training and it is a rate he tries to maintain today. Since the beginning of 2004, he began posting short stories and commentary on his blog, but he did not go into print until his prose collection Grey Stories was published in 2008. This has been followed by the longer stories The Bird Saw Me and Cat and Mouse.

He spent some time on the editorial board of Chutzpah, one of China’s many literary magazines, and then moved to the Xiron publishing company, where he works as an editor of its colourfully named Iron Gourd literary fiction imprint. What stirred his desire to write was a childhood memory. “I remember that when I was a young child, from maybe when I was six until I was ten, I had this idea of writing novels. In many ways I’ve come back to that childhood dream.”

Not only is this Ah Yi’s first ever London Book Fair, it is the first time he has left China. Despite having established his reputation online before going into print, he remains remains skeptical of some of the quality online: “I still work with paper publishers today. With the excessive democracy of online writing, the threshold is very low. If people want more clicks, the writers lower their standards and produce rubbish. For me, if one day there are no more paper books, then that will be the death of morality.”