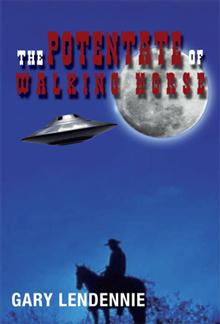 In our effort to help facilitate the discovery of hot new titles that might interest overseas publishers for rights deals, we offer the occasional selection of “starred” reviews from BlueInk reviews, a service which reviews self-published books. These are all books that BlueInk Review feels “merit your attention,” and “are of exceptional quality and particularly worthy of representation.” The Potentate of Walking Horse, by Gary Lendennie: This thoroughly engaging story recounts the ostensible reminiscences of the “author’s” great-great grandfather, who notices strange goings-on as he arrives in Walking Horse, Arkansas, with his Indian traveling companion. A mix of Old West and space frontier, the story is populated by cattle rustlers, gamblers, codgers, Indians — and aliens. Featuring an “utterly winning” narrator, it offers a ten-gallon hatful of delightful diversions.  (Note: minor copyediting errors.) Read review.

No Cause For Shame, by Richard Stein: Brutal rapes. Mysterious deaths. Incest. A serial killer. A sabotaged cancer study. Author Stein wraps all that and much more into a spellbinding and brilliantly paced murder mystery that demonstrates the plot-twisting skills of Jonathan Kellerman and the medical savvy of Patricia Cornwell. (Note: Stein is a hematologist/oncologist at Vanderbilt University, making him particularly suited to write a medical suspense story.) Read review.

These books did not receive Stars, but were very well reviewed:

When God Opens a Door…Run Through It, by Tommy Watson. Watson, who was the pastor at a Florida church with its own TV show and the longtime chaplain for the Miami Dolphins, recounts his preaching adventures, including trying to coax OJ Simpson into attending a prayer conference after his famous acquittal and smuggling Bibles into the old Soviet Union. “An absorbing spiritual page turner,” writes our critic. Read review. The Archaeologist Reborn, by Thomas E. Martin. A delicious, absorbing sci-fi adventure that revolves around a professor who becomes intent on organizing a mission to Mars after nearly driving off a cliff on a mountain trip one day, only to encounter an alien spaceship. Read review.

The Enemy is Within!: A Harry Heron Adventure, by Patrick G. Cox. A sequel to Cox’s debut novel, Out of Time, this book continues the story of three young seamen who are transported from the 19th century, 400 years into the future. “The novel’s dynamic teenage heroes and young adult tone make this blend of historical naval fiction a la Patrick O’Brian’s Aubrey-Maturin saga and space adventure appealing to young and old readers alike.” Read review.

Rain Upon the Blinding Dust, by Jim Hawley. This novella revolves around two young men, an escaped slave and a drummer boy, who forge a bond on the battlefield during the American Civil War. With characters that are convincingly young, brave and afraid, “this would be a perfect book for young adults with an interest in history,” notes our critic. Read review.

Stewart Sinclair, Private Eye, by Elizabeth Greenwood: When the pompous and erudite British detective Stewart Sinclair hires archaeology student — and female impersonator— Sebastian Barnard as his assistant, the result is a set of madcap escapades that take the characters to exotic locales and offers a read like no other. Indeed, our critic compares the book to Seinfeld and Dr. Seuss. “It’s great, lively and witty patter to no larger purpose — and yet this reader would devour a sequel gladly,” the critic notes. Read review.

The Political Primer: Fundamentals of Politics, by Mark E. Glogowski, Ph.D. Politicians are in the business of manipulation, so how can voters be sure they aren’t fooled into placing their faith in the wrong political camp? Author Glogowski presents a clear and compelling framework for making voting decisions based on internal values. “Basic without being simplistic, Glogowski’s primer is the perfect companion for the election season,” notes our critic. Read review.

Quincy Moves to the Desert, by Camille Matthews; illustrated by Michelle Black. This charming picture book, the second in a series, follows Quincy, a sweet and lovable red horse, as he is transported with his best friend and mentor Beau, a slightly older horse, from New York to New Mexico. Their encounters with other horses along the way – draft horses, thoroughbreds, Appaloosas and more — teaches children about different breeds of horses and the tools needed to care for them. Winner of the Mom’s Choice Award. Read review.

Photography in Oman: Photography and Islamic Culture, Second Edition, by Abdullah Khalfan Al-Sauty: The head of the photography department at Sultan Qaboos University, Oman, describes the technical aspects of still life, portrait, landscape and candid photography, offering invaluable explanations of how each of those uses is affected by Islamic law.  “A must read for anyone who plans to visit an Islamic country, camera in tow,” writes our critic. Read review.