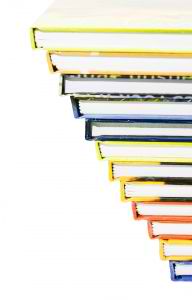 Today’s feature looks at the multi-continental publication of Here is Berlin. As the article notes, the author opted to publish the book in both print and digital simultaneously:

We started with the release of the German hardcover edition in December 2011. Within three months, we had managed to release the English hardcover version of the book (each hardcover edition had an initial print run of 1,000 copies, with a retail price of $21.99 per copy…as well as tailor-made e-book editions for the Kindle and the Nook in three languages.

The cost of print was a factor — the author admits the need to sell 450 copies in order to pay the initial print bill. While many people might be put off by facing a looming bill — it did have the unforeseen advantage of motivating the publisher to push the book. They were also able to get the book into physical bookstores, something that allowed them to subsequently tour.

I also suspect that since the book was going to be bound between covers, an extra degree of care was put into the design o of the book, the typesetting and the copyediting. When you hold something in your hand, the flaws jump out at you more than it might as an e-book.

The pressure of print, ultimately, likely produced a higher quality product than had the work merely been digital.