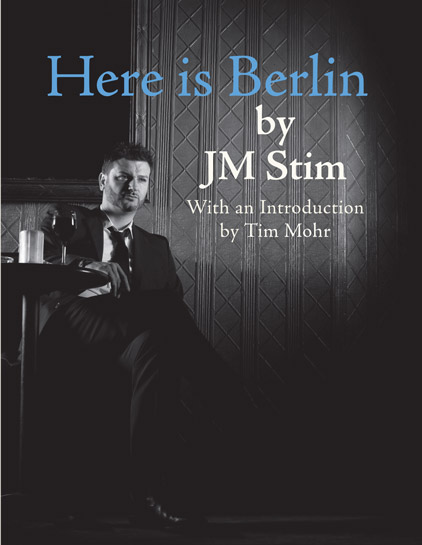 What’s it take for an indie author publish in three languages at once, in print and digital, sell into bookstores and tour on two continents? In the beginning there was the word, and the word was No, and it was good.

When it comes to Here is Berlin, a 10,000 word essay on the German capital partly modeled on E.B. White’s iconic 1949 essay Here is New York, everything started with half a dozen rejections. But these were not the kind of rejections I was used to — not the normal rejections you get when trying to convince publishers to buy into an idea for a book.

In early 2011 – just as I was moving from Berlin to Manhattan – I talked for the first time to representatives of six European publishers about Here is Berlin. With just one exception, all of them expressed their willingness to publish the book in the fall of 2011. As happy as I was about this, I refrained from making a commitment to any of them. Having been a founder and, for seven years, the publisher and editor of a political and literary monthly in Vienna called Datum, I’d had all sorts of experiences with book publishers. And I still felt burned as a result of another book I’d published with a major press a few years earlier, too, which in spite of being critically acclaimed in Europe as well as in the U.S, had been marketed poorly — and it showed in terms of sales.

All commercial considerations aside, Here is Berlin also represented a labor of love for me, and I decided this project demanded a publisher who not only understood the book itself (and its blueprint, the E.B. White classic), but also understood my global approach and the book’s potential global appeal. Such a publisher would have to be able to provide the appropriate framework for a modest but effective global launch.

It quickly became apparent that not a single one of the five presses that had initially expressed interest in the book would be able to provide that. The initial enthusiasm these presses shared upon my presentation of the idea to them evaporated soon after I had named some of the terms I insisted on: simultaneous publication in three languages, translators selected solely by myself, the hiring of a company specialized in converting printed materials into e-books, presentation tours on both sides of the Atlantic (the costs of which I would for the most part be able to cover myself through strategic partnerships and personal connections). As I learned, the belief that for a product like Here is Berlin such an approach would be considered standard in this day and age stood in stark contrast to the publishing reality in Europe. And because I still lacked the necessary contacts in the U.S., where I had relocated by that point, I found myself in a real bind.

One enlightening conversation I recall from that time was with a guy who to this day runs the non-fiction department of a major German publishing house. After I explained that if all of my suggestions were fully implemented the production costs for the publisher would turn out to be even lower than for other projects, he opened up to me in a way I had not expected (“strictly off the record, otherwise I could get into real trouble”). He said, “I understand perfectly why you want to do it the way you want to do it, and, just between the two of us, I think it’s smart and pioneering. But if you want to deal with a major publisher, we have to do it our way, because otherwise all of our authors will knock on our door tomorrow asking why we appear to be giving you special treatment. For one thing, in order to follow through on even a few of your suggestions, we would have to bring in our lawyers to design a fully customized agreement. So even though everything you want makes perfect sense to me, for our house it would mean opening a can of worms. The business is just not ready for it.“

I seemed to be faced with the choice of having the book published the “good old way” or going down the road of vanity publishing. But, encouraged by my New York translator Tim Mohr, who also wrote the introduction for Here is Berlin, I decided to look for another solution. It turned out that was not only feasible, but, as I now know, also profitable.

To Break Even: Sell 450 Copies in Print

We started with the release of the German hardcover edition in December 2011. Within three months, we had managed to release the English hardcover version of the book (each hardcover edition had an initial print run of 1,000 copies, with a retail price of $21.99 per copy including shipping, available worldwide via mail order at hereisberlin.com), as well as tailor-made e-book editions for the Kindle and the Nook in three languages (German, English, and French, $4.99 per copy, available worldwide on platforms such as Amazon and Barnesandnoble.com).

According to our business model, to break even (after taxes) with the hardcover editions required sales of around 450 copies of each edition by the end of March, when the printing bills would be due—a milestone we had already achieved by mid-February. (As the e-books were only published around that time, we do not yet have reliable sales figures on them, but considering their production costs were extremely low, we assume we have also already achieved the break-even point on e-books.)

Getting It Into Germany’s Biggest Bookstores

These achievements have been made possible in part due to the fact that a large bookseller — Thalia Germany and its daughter company Thalia Austria, the biggest bookstore chains in their respective countries — ordered numerous copies of Here is Berlin after a large number of extremely positive reviews, mainly in the Austrian media (which doesn’t really come as a surprise given the fact that the country is my old stomping ground). In addition, about two dozen small and medium-sized bookstores in both countries as well as in Switzerland have begun to stock the German edition of the book (retailers get a 30% book dealer discount if they order at least three copies on hereisberlin.com).

The other key to making this project work as been the building of virtual communities, ranging from the hereisberlin.com-website to fan pages on Facebook in three languages as well as most of the other popular social media sites like Tumblr or Pinterest. The photos of Berlin we have been using for advertising and building these virtual communities were done for free, as a personal favor, by photographer Christian Koblizek, who lives and works in Oslo, Norway. And now, as we kick off the events I’d envisioned on both sides of the Atlantic, those communities are allowing us to get the word out about eight appearances we’re making starting this week across Germany and Austria, and, in April, five more events in North America.

Across the Atlantic and Back

When it comes to the US market, we have been taking one small step after another so far. Due to the extremely positive reviews the book got in Europe, most of the German institutions in New York took the opportunity to jump on the bandwagon and subsequently sponsored and promoted the debut presentation of the English edition, which took place on March 2, at New York University’s Deutsches Haus. The launch event turned out to be a great success: the venue reach its fire code capacity of 120, and the organizers had to turn away another two dozen people.

This week, we kick off the European tour, with eight events in seven cities, starting in Berlin, and translator Tim Mohr and I will be publishing a diary of this European leg of the tour right here on Publishing Perspectives. We’re thrilled to be able to document this experiment in international DIY publishing as we muddle through a tour entirely organized on our own and financed through a combination of selling books at each stop and a few honoraria from the academic institutions where we’re stopping. See you over there, baby, see you over there.

DISCUSS: What’s the Advantage of Doing DIY in Print, Not Just Digital?