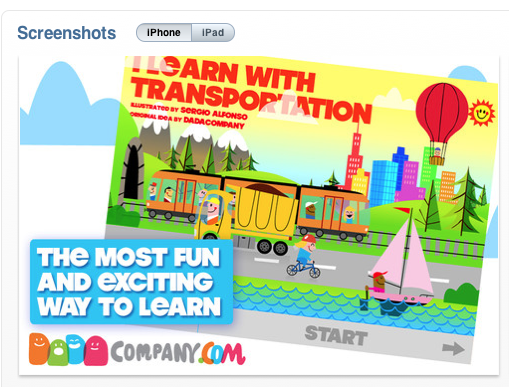 BILBAO: Launched last year, DADA Company is a new illustrated book and interactive publishing company that is striving to create “new ways of creating and feeling, where old and new ways of looking at the world coexist,” according to marketing manager Jose Maria Martinez Burgos. What makes the company different, he says, is the variety of its members: “It’s very important for us to join the point of view of programmers, designers, illustrators and educators. We try not to repeat the existing types of education apps — learning to count, learning to write, learning the letters, etc. — or existing books. Who needs 258 different versions of Little Red Riding Hood? DADA Company isn’t going to cover that story. Creating new stories for new people is important for us. The kids are not the same as they were 30 years ago, so the stories also have to change. New stories must be told that mirror the current circumstances of kids.”

To date, DADA has released two digital storybook apps, I Learn with Transportation and Off to Bed!, both available for iPhone and iPad.

I Learn with Transportation is a bilingual teaching tool for children ages 1-4. It showcases twenty-one of the most popular forms of transportation in a way that allows the reader to interact and learn while they have fun. It intends to intrdoduce the child to six areas of knowledge — sounds, words, colors, shapes, numbers and the environment — all while offering a new experience for the user each time it launches. Gradual content development is brought into play as the scenes start with the most simple content (such as sounds and words) and advance to more complex material related to logical and mathematical development or different environments. It works to develop attention span, as well as visual and auditory discrimination. It helps to develop hand-eye-coordination and fine motor skills by moving the vehicles across the screen. It’s an introduction to numbers and counting. It helps to develop skills in recognition, differentiation and familiarity because the vehicles on the screen are tied to their written names, to basic colors, sounds, geometric shapes, and to their different environments. And finally, it’s an introduction to Spanish – the app includes two languages (Spanish and English) that are interchangeable by the user via the adjustments menu – meaning that children will be able to discover or reinforce their first words in both languages.

Off to Bed! works in the same way by allowing the reader help the character get into bed by moving a finger across the screen; hopefully learning along the way that it is their own bed-time as well. Touching the screen released a flurry of interactive surprises and providing the user with entertaining ways of seeing, reading, playing, touching, gliding, bumping and making music – all in one app. The company is busy trying to analyze the success of their first apps in the Spanish market.  For example, Off to Bed! spent several months in the top 10 in the Books category in the Spanish App store and was featured by Apple as one of the five best books in the “Rewind 2011.” Meanwhile, two new apps are currently in production: Marina and the Light and Living 1000 Adventures. “Marina” boasts artwork by Spanish artist and filmmaker Alberto Vazquez, and “Living,” illustrated by Sebastia Serra, vividly explores the worlds of imagination and the daily life of children.

But though success seems to have come quickly to DADA, according to Martinez Burgos, its goals remain the same: “DADA Company makes the apps with love: we match the best illustrators with the best scripts using the best devices in the market resulting in the best literary experience for our children.”