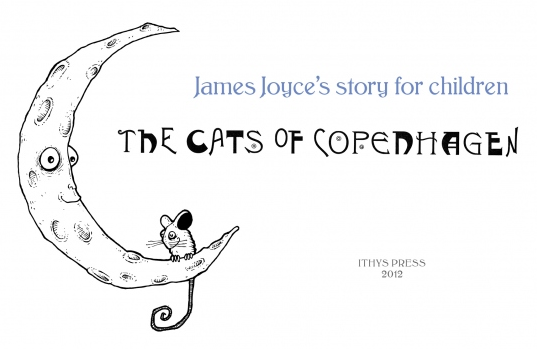 A newly published children’s story by James Joyce raises questions about ownership in a post-copyright age.

On January 1 of this year, the published works of James Joyce, author of such 20th century classics as A Portrait of the Artist as a Young Man, Ulysses, and Finnegans Wake, entered, for the most part, into the public domain. It was a moment long awaited by Joyce scholars. As the Los Angeles Times reported, “Joyce’s grandson Stephen, his only living relative, has long been thought to have been more of a hindrance than a help in terms of managing Joyce’s estate. Stephen charged high fees, refused scholars the right to quote from Joyce’s work and shut down the Irish government’s planned public readings of the centenary of Ulysses when he threatened litigation  With works now in the public domain, Stephen can no longer make those calls.” Also in January, a previously unpublished children’s story by Joyce, “The Cats of Copenhagen,” was printed in a limited run of 200 illustrated copies by the Dublin-based Ithys Press, a prices ranging from 300 to 1,200 Euros, creating a flurry of protests from the Zurich Joyce Centre.

The new story, described by Ithys as “exquisite, surprising, and with a keen, almost anarchic subtext, is a “younger twin sister” to “The Cat and Devil,” the only other known example of Joyce writing a story for children. Both stories, written within a few weeks of other in 1936, were taken from letters sent to his only grandchild, the aforementioned Stephen James Joyce.

Publisher Anastasia Herbert described the story’s history, “In early August 1936, Joyce had sent his grandson ‘a little cat filled with sweets’ – a kind of Trojan cat to outwit the grown-ups. A few weeks later, while in Copenhagen and probably after hunting for another fine gift, Joyce penned ‘Cats,’ which begins: ‘Alas! I cannot send you a Copenhagen cat because there are no cats in Copenhagen. Surely there were cats in Copenhagen! But perhaps not secretly delicious ones.’ And so the story proceeds to describe a Copenhagen in which things are not what they seem,” said Herbert. “For an adult reader (and no doubt for a very clever child) ‘Cats’ reads an anti-establishment text, critical of fat-cats and some authority figures, and it champions the exercise of common sense, individuality, and free will.”

The letter in which the story was found, dated September 5, 1936, was donated by Hans Jahnke, son of Giorgio Joyce’s second wife, Asta, to the Zurich James Joyce Foundation. The Foundation itself has called the story’s publication an “outrage,” emphasizing that it has not granted permission for the book’s release, adding that it had “allowed bona fide scholars to inspect its documents,’ but was “never approached or informed” about the Ithys book.

“We have been completely overlooked and ignored. It’s only common decency to ask the owner,” said the Foundation’s Fritz Senn. “We are outraged. We have had no hand in this unfair thing and feel not just ignored but cheated.” Senn added that while Joyce’s works have entered the public domain, it has not yet been determined whether non-published material is out of copyright as well. “Copyright has been lifted only, we believe, from the published material. All the huge amount of non-published material we believe is still under copyright, so this is, we believe, an infringement of that,” he said, adding that he is concerned that the notably belligerent Joyce estate might sue. “We haven’t heard from them [but] what I’m afraid of is that with the large amount of copyright taken away from them, their remaining territory will be defended even more ferociously.

For her part, Herbert strongly disagrees, saying in a statement that “The unpublished works of James Joyce are now (since 1, January 2012) in the public domain. They have left the hand of a copyright owner claimed by some Joyceans to have used this copyright to prevent artistic and scholarly work that could not in any manner damage any genuine concerns of the James Joyce Estate, but rather enhance the reputation of the author and, indirectly perhaps, prove beneficial to the fiscal interests and responsibilities of the Estate…The attempt by Mr. Fritz Senn of the Zurich Joyce Entre proprietarily to assert some rights on this now public-domain document is preposterous. The said Center has no rights in law in the copyright of the papers donated (given free) by Dr. Jahnke…The book was conceived not as a commercial venture but as a carefully crafted tribute to a rather different Joyce, the family man and grandfather who was a fine story teller, much like his own father John Stanislaus…”

Ms. Herbert added in an interview with the BBC that the argument raised a significant number of questions “about ownership in a post-copyright age: Is it really only bona fide scholars who have the right to see, interpret, adapt, and publish works in these archives? And who exactly qualifies as a ‘bona fide’ scholar?”

It will be interesting to see how these questions resolve themselves.