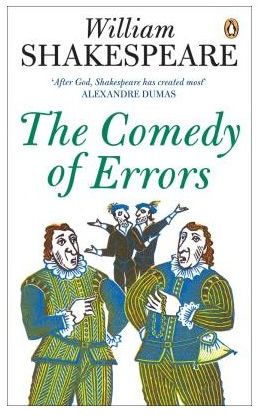 We’ve read Henry VI, Part One. And Part Two. And Part Three. We’ve read Richard III. The War of the Roses is now complete, and along the way we’ve seen plots and counterplots. Witches and conspiracies. Omens and curses. Three dead kings and more murders than one can keep track of. It’s time for a laugh.

This week, Publishing Perspective’s year-long examination of the plays of William Shakespeare, The Play’s The Thing, began its reading of Shakespeare’s rollicking farce, The Comedy of Errors. Take two sets of identical twin brothers with the same name but separated by birth, set them all down in the same location by chance, and get ready for the bewildering madcap confusion that follows. Described by Harold Goddard as “a masterpiece of own kind…few better farces have ever been written,” it has served as the basis for the Rogers and Hart musical The Boys From Syracuse, the hip-hop musical The Bomb-itty of Errors, the Bette Midler/Lily Tomlin film Big Business, four Indian films including Ulta Palta, and even an episode of The X-Files!

We hope you can join us.