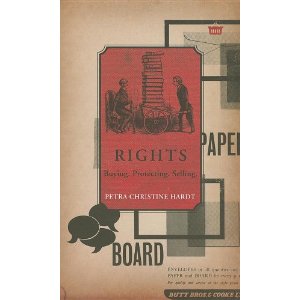 The book explains how success is possible “based on an independent model.” Petra Hardt, Foreign Rights Director at Suhrkamp Verlag in Berlin, has written a book to guide publishers in making the best choices regarding such essential questions. In an interview with Publishing Perspectives, she talked about Rights: Buying. Protecting. Selling., which recently appeared in English translation from Seagull Books.

First published in 2007 by Bramann Verlag, Hardt says that she received an overwhelmingly positive reaction to the book in Germany: “Before, there was nothing like it. What’s daring about the book is how short it is.” Consisting of 87 pages of sensible and to-the-point advice on contracts, royalties, author relations, and other topics, the book is practical in the utmost. Another 40 pages is dedicated to sample royalty scales and contracts.

With her 32 years of experience in the German book industry, Hardt was motivated to write the book after she realized one important factor in ensuring Suhrkamp’s success: “It’s because of the kind of contract. That is unequivocal and clear. With this contract we’ve been able to remain independent for 60 years.”

The word “independent” is particularly important to Hardt’s vision for the book’s impact abroad. Rights was translated into Chinese in 2009, and into Arabic and English in 2011. The foreword to the English edition declares, “These essays are generally intended for those who are entrusted with establishing rights and royalty departments in Asia, Arab countries, and Africa.” In other words, says Hardt, “We aren’t going to New York.” (That said, reading Rights from an American perspective, it is undeniably of interest to small and independent publishers in the US and Canada as well, for example.)

Why is a German publisher’s perspective particularly relevant in developing markets? Well, it isn’t. But a successful independent publisher’s perspective is, since many publishers in developing markets may be emerging from or competing with state-owned publishers, or contending with large conglomerates from abroad. Hardt also counts on publishing translations of Rights with people who are expert in local book business, eg. Naveen Kishore of Seagull Books, publisher of Rights in English, who understands the singularities of Indian publishing.

Hardt explains that she’s certainly not motivated by “a zeal for proselytizing,” but by a demand that she recognized in talking with publishers at various fairs and conferences, a demand created by “a changed global trade, an accelerated global trade. Cairo was the neatest example,” says Hardt of a recent conference. The publishers there “felt very encouraged” because the book explains how success is possible “based on an independent model.” It’s a model for which understanding the importance of contracts and copyright is essential: “Copyright has a political presence. It goes beyond contract-making. It has a cultural-political significance.”

Hardt says her goal was to create “a basis for discussion. Of course, it doesn’t fit for every publisher.” Aimed at publishers of literary and academic works (like Suhrkamp), Rights will be less relevant for publishers of genre or entertainment literature.

It’s hard not to read the book without thinking that many of its recommendations would be significantly easier to follow in places where literary agents don’t have a strong presence. Hardt says that she works with many agents who understand and assist her in her approach, but that many others “don’t appreciate the difficulties of production.”

As to digitization, “You can’t stop things from happening — and why would you want to? — but you can influence the way they happen,” she says. “It doesn’t matter what format it’s in, it has to be protected.” An updated edition of Rights will be published in 2014. More detailed, and about twice as long as the current one, the forthcoming edition will contain more information on the e-book market in particular.

DISCUSS: What is the Appropriate Term for a Book Contract?