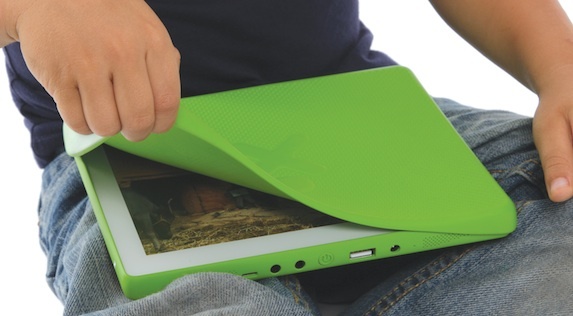 There’s bound to be a lot of breathless announcements coming out of CES this week. Brace yourself. Only some really have an impact. Here is one:

One of the most exciting things I saw last year was a prototype of a new full-color, low power, sunlight-readable e-ink screen produced by Pixel Q. This week OLPC — One Laptop Per Child — is showing off a new $100 tablet computer utilizing this technology at the Consumer Electronics Show. OLPC has already delivered more than two million low cost laptops to under privileged children around the world — “2.4 million children in 42 countries and in 25 languages,” to be exact, said Edward McNierney, chief technology officer of One Laptop per Child.

With this new 8-inch Android/Linux-powered tablet, their reach will likely go much further. But what’s most exciting about this new announcement is the format: a tablet is much more friendly to someone wanting to read an e-book than is a laptop. The next big challenge is making sure users will be able to access enough book content. While there is plenty of public domain and Creative Commons work available, it would be even better to see some publishers partner with the organization to make copyrighted material available to them at low or no cost.

“Partnering with One Laptop Per Child is one way…to benefit children in some of the poorest places on the planet,” said Tom Hayes, vice president of corporate marketing at Marvell and a member of the OLPC advisory board.