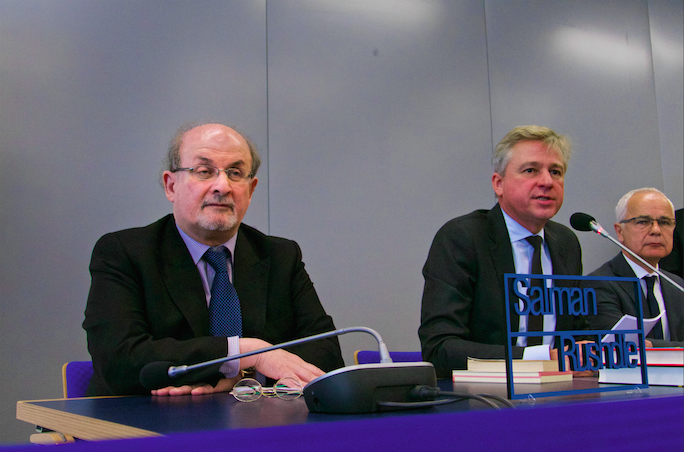 The Saudi government is protesting the publication of a new translation of Salman Rushdie’s The Satanic Verses in the Czech Republic. At the opening press conference of the 2015 Frankfurt Book Fair, author Salman Rushdie stated that, “The point about freedom of expression is that it is universal … this is the one thing we must defend because without this freedom all other freedoms fail.”

But just days before Rushdie’s address, Reuters reports that Saudi Arabia “summoned the Czech ambassador to protest against a new translation of…Rushdie’s book The Satanic Verses,” a mere 27 years after the novel’s initial publication “triggered mass demonstrations and a death threat against the author.”

Citing a source in the Saudi foreign ministry, the ambassador was informed that “the book insulted both Islam and Muslims and asked him to try and halt its publication.”

Rushdie’s publisher, the Prague-based Paeska told Reuters that it had not been informed of the complaint, and, in any case, its first printing of the book, released in April, was close to selling out.

Filip Mikes, the company’s director told Reuters that it had already published 11 of Rushdie’s titles. “We have been and will continue to publish (Rushdie) he said.

It is perhaps worthy of note that the book’s translator used a pseudonym.

The Czech foreign ministry said that “the book had come up in a meeting with Saudi authorities,” and that the Czech ambassador had “explained the publication was allowed under Czech law.”