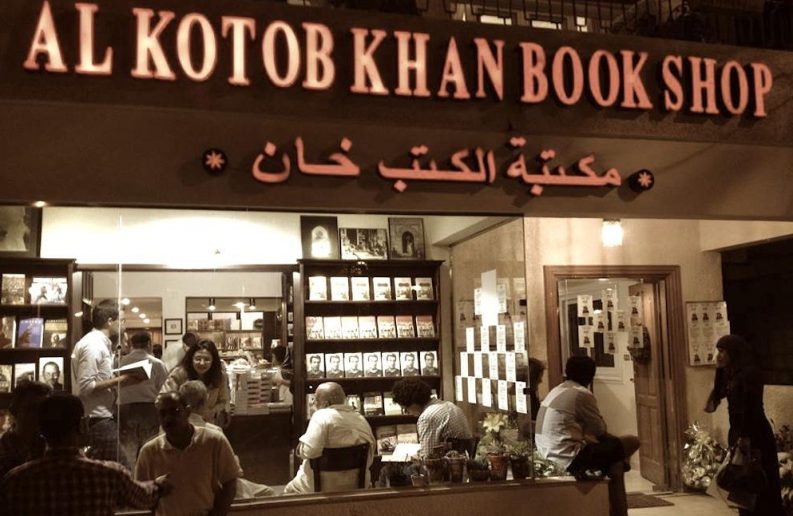 Cairo’s Kotob Khan has become as much a gathering place for the community, as a bookstore. (Photo: Facebook)

Cairo’s Kotob Khan Bookstore does far more than merely sell books: it serves as a community center, a gathering place — and now a publisher as well.

At Your Middle East, Marcia Lynx Qualey looked at Cairo’s Kotob Khan Bookstore, founded by Karam Youssef not just to sell books, but to build a community.

As Youssef explained to Qualey, “It was my wish that there would be a place to take care of books, where a book – that sentient being – can feel safe.” And that in itself was the origin of the name. “A khan for books, or a motel for books, where books can rest on their long journey and start again on their eternal travels.”

“I did not inherit Kotob Khan,” she added. “Kotob Khan was for me an existential choice. And from the start, its inclination was toward Arab culture…The bookshop took as its role model the great libraries in human history, and for this reason selling books was not our main aim.”

Which means that the store is also a place for reading and research, as well as a cultural and social center. It hosts creative writing workshops, a monthly book forum, book signings, discussions, and movie screenings. “Kotob Khan has worked as a safe harbor for cultural groups,” she said, “and we welcome the wide spectrum of the Egyptian literary scene.”

And since the events of Arab Spring, it has become a place “where people can go to hear about their human and political rights through a series of lectures given by social critics, lawyers, journalists, MPs, and candidates for parliament.”

At its heart though, it remains a bookstore. And along with Arabic books, Youssef said, “we import a variety of books that carry enlightenment values to the Arabic-language reader, and specifically to the Egyptian reader. We take the side of books that serve these cultural aims: modern philosophy books, social critiques, the humanities, psychology, politics, economics, and literature.”

And if all that wasn’t enough, Youssef has also launched a publishing house that “leans towards young writers and their debuts,” along with the goal of launching “a serious translation movement through a group of the best Egyptian and Arab translators.”

She added, speaking about the problems inherent in both publishing and bookselling in the region:

“I want to say that the lack of a distribution database, which would contain all the details about bookshops and book prices in [the] region poses a huge difficulty for us and for any publisher who wants to sell into the region. Today, after the emergence of the eBook and its applications, and with a market that’s constantly changing both locally and internationally, we must look around and wonder about bookshop policies, publishing policies, and censorship and the role that the latter plays in importing books, whether Arab or non-Arab.”