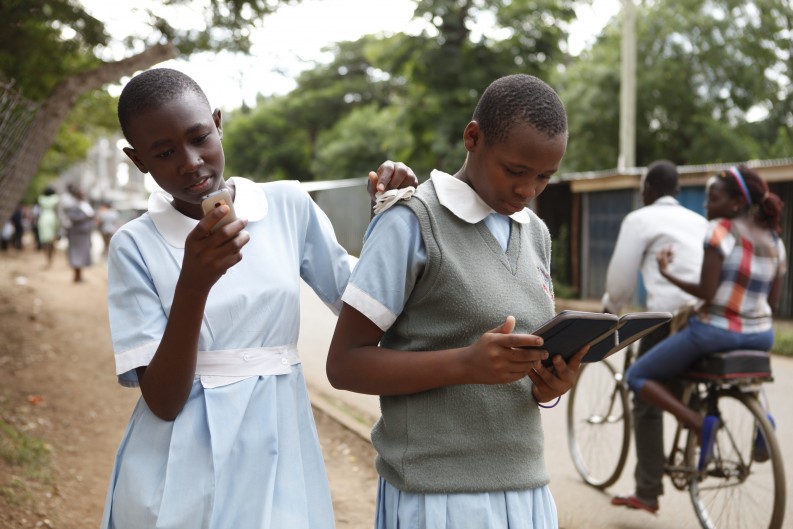 Dani Zacarias of Worldreader argues book donations have a dramatic impact on the developing world and it is both easier and cheaper in the digital age.

A year ago I stood in central Nairobi scanning book covers laid out on a strip of cloth on the sidewalk. They were a motley collection, unified only by how out of context they all seemed. I saw a cookbook with an enormous turkey on the cover and a book about snowmen. Taken together they had the look of donated books from America: a little tattered and years out of date. Standing there it occurred to me that the existence of ebooks is changing not just the for profit aspect of publishing, but the philanthropic as well. E-readers and tablets weigh about as much as a single book, yet represent access to countless books. Mobile phone subscriptions are currently almost equal to the number of people in the world and the gap continues to close every day. This means that giving books has never been easier or more efficient, thus enabling the kind of grand scale that changes the game altogether.

And that game change is necessary: in sub-Saharan Africa alone it is estimated that approximately 50% of schools have few or no books. At current growth rates, the UN predicts that by 2050 the population of sub-Saharan Africa will be close to 1.5 billion. If access to books remains limited that will mean the squandering of a vast potential and millions left out of a global discourse that often trades knowledge and ideas in writing.

Improving the Efficiency of Book Donations

Perhaps the most salient difference between physical and electronic book donations is that of increased efficiency and reduced cost.

Those books on the street corner in Nairobi might have come directly from publishers or through another book donation scheme that focuses on collecting used or left over books. Either way, it is not likely that they were selected for their relevancy or utility and the lack of either represents what many organizations (including many nonprofits that deal with paper donations) have come to regard as a well intentioned but outdated model of giving. As well, those specific books missed their mark: they were probably destined for a school or library but they ended up as merchandise instead.

Ebooks, on the other hand, require only that the intended user have a device before the rest is simplified. It would be incorrect to suggest that getting devices equipped with reading applications, or promoting reading applications to owners of low-cost mobiles is simple. However, it is much easier, cheaper and simpler than bringing paper libraries large enough to be useful to the same number of people.

Once a device is made available, e-book delivery and receipt can be instantaneous and considerable. On Worldreader Mobile uploaded books appear minutes later on users’ mobiles thousands of kilometers away. Through Worldreader BLUE Boxes, which brings e-readers into libraries and schools, thousands of books can be sent in the blink of an eye from our office in San Francisco to e-readers in Kenya. The schools and libraries in charge of the devices need only wi-fi to double or triple their current collection of books.

In the world of paper books publishers are limited to donating leftover or unwanted titles. Whereas with ebooks they can pick based on what they think readers might like and then base future decisions on what the data shows users are most interested in reading.

In my work with American publishers this has so far meant, somewhat surprisingly, that bestsellers are often included in donations. For instance, Open Road Integrated Media donates Pearl S Buck’s Pulitzer Prize winning The Good Earth and RosettaBooks donates The Seven Habits of Highly Effective People which has sold an astounding 15 million copies worldwide. Both are great books: globally appealing and exceptionally well written.

Increasing access to ebooks in developing countries is one way to ensure sub-Saharan African inclusion in the global narrative, but there is one stumbling block greater than the hurdle of making devices and reading applications available: it is that for the time being publishers will have to give away a significant amount of content for little or less than the usual. This gambit can go one of two ways. A few fellow publishing professionals I have talked to have argued that giving away content on a massive scale will not build a user base of paying customers, but a user base acclimated to paying too little or not at all.

The alternative is not only brighter, but is backed by strong precedent. Back in 1943, in the middle of the Second World War, publishers gave away over 122 million copies of their books to soldiers at a pittance. The result upon the soldiers’ return was a dramatic change in the literary landscape in the United States. Prior to the gambit, books were hard to find, bookstores rare and books outside of cheap pulp fiction were cost-prohibitive for the average person. Though some worried that the books reserved for the soldiers would flood the civilian market and cost publishers money or that the soldiers themselves would never pay a real market price for books, they were wrong. In the decades that followed the war, the publishing industry thrived.

Publishing is one of those rare industries, where the product being created is something that is not just nice to have, but critical to the development and maintenance of a fair, just and economically prosperous society. I believe this creates a certain level of responsibility to give, but at the same time recognize that nothing good would come out of bankrupting publishers through their generosity. Thankfully, in the age of digital giving, building one’s business and doing the right thing happen to be one and the same.

Dani Zacarias has worked at Worldreader for three years and in publishing for five. She’s currently based in San Francisco where she leads North American content acquisition for Worldreader.