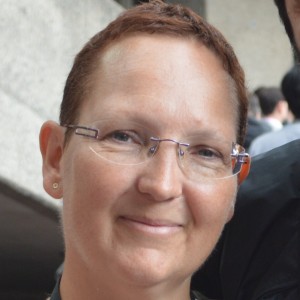 Florence Devouard, the former chair of the Wikimedia Foundation and the co-founder of Wikimedia France, discusses Wikipedia’s work in developing countries.

Since it was launched in 2001, Wikipedia has become an essential source of information, to such an extent that it ranks sixth among the world’s most visited websites. The publishing market has not remained immune to the rise of this new player: indeed, whole segments of the industry – such as dictionaries and encyclopedias – have been hit hard. On this occasion we spoke to Florence Devouard – the former chair of the Wikimedia Foundation and the co-founder of Wikimedia France – about Wikipedia’s initiatives for developing countries, as well as the platform’s internal operation. Florence, please tell us about your background and your involvement in Wikipedia.

Wikipedia was started in 2001 and I discovered the project the same year. It was a brand new project – English only. Nobody knew anything about it. I knew nothing about open source and free license: it was just a discovery to me and I thought the idea was very exciting. At that moment I was working mostly for big companies – I’m an engineer in agronomy – and one of my big concerns at that time was to find information that would be non-biased about topics such as Genetically Modified Organisms – GMOs.

In December 2001, on a discussion forum for video games I discovered Wikipedia and started participating in it. I joined the project and have been involved in many different ways since then. I was on the board of the Wikimedia Foundation, an entity created in 2004 to be the host provider and the operator of Wikipedia. I had the opportunity to lead it after Jimmy Wales, the founder. I also helped to co-found Wikimedia France.

What is Wikimedia/Wikipedia’s approach regarding developing countries, in terms of contributions, local projects, etc.?

We have a nice sentence that you can find at the top of Wikipedia pages – we want “a world in which every single human being can freely share in the sum of all knowledge” – and for this to happen we need to make sure that the content is actually provided not only by white rich people in the US but also by people everywhere.

For example, we need women, many more women; we have only 10% of women participants. We need not only young people but also retired people, middle-aged people… We need people with high diplomas and also people working with their hands doing all kinds of jobs. We need people from any type of religion, any type of political position. We need diversity.

And what we realized is that we have rather few contributors and rather few readers in developing countries; in particular Africa is very low, except for countries such as Algeria, Morocco, Tunisia, Egypt and South Africa, to a certain extent. The rest of Africa is just… not much. We also really don’t have enough participants in countries such as India for example, where there are so many people that could join. So over the years we have tried to have some initiatives that could help push participation from these countries, with the understanding that the needs of the people there are different from the needs we have in Europe.

What would those differences be?

Well, a few years ago we launched a photography contest,Wiki Loves Monuments, which is rather famous and which was considered by the Guinness Book of Records as the largest photographic event contest ever. The photography contest takes place every year, in September, and the idea is to take pictures of historical monuments. This is rather simple to organize for example in a European country, because the government issues a list of protected monuments. So you have a list – maybe that’s just a train station, one kilometer away, maybe that’s just a building or statue, etc. You go there – most Europeans have a camera or a cell phone – take pictures and upload them – it’s simple.

When we want to do that in countries such as those in Africa, in most cases, nothing happens: people are not aware of the existence of Wikipedia, not aware of the contest; there is no list of historical monuments – when there is one it is mostly colonial buildings, so it is not so exciting –; people don’t really have cameras; the Internet connection is bad, so it doesn’t work… So we have been thinking of ways we could drag in people from countries such as Ivory Coast, Zambia or Uganda. And we came up with a bunch of solutions.

One of the initiatives is called Wikipedia Zero and is run by the Wikimedia Foundation. The idea is very simple: the Internet providers – such as Orange – give access to Wikipedia without any data being charged to their members’ subscription. It helps a lot because it means that people with a mobile subscription can access Wikipedia with no additional cost.

The second project – named Afripedia – is quite different. It is run by Wikimedia France, and the main concept behind it is to help give access to Wikipedia to people in areas where the Internet connection is bad. What we do is to set up a system in a university – a system called “plug computer” that’s actually a small device. You plug it in to the network, it retrieves Wikipedia content, and this little system will provide a hot spot area to people around, giving good quality access to Wikipedia content. Typically it will concern the students, the teachers and the people getting in the university, even the general public going into the university or in its surroundings. The project runs only in French-speaking countries. We don’t have the equivalent at the moment in an English-speaking university in Africa as far as I know.

Finally, we have a third initiative, called Kumusha Takes Wiki. It’s a project that aims to active communities across Africa to create and contribute freely-licensed information, texts, images and media about their communities (villages, townships, suburbs, inner cities, etc). We hired, trained and supported some Wikipedian in community who are working locally – this year in Ivory Coast and Uganda –, and their job is to do some outreach, on a local level: hold a press conference, organize photo hunt parties, training sessions, and so on.

This was associated with a photography contest, Wiki Loves Africa, which is just taking place: people in Africa were invited to contribute images or videos related to local cuisine. We received images from basically all countries, though of course we could see many more pictures coming from the country where we have a handful of contributors.

Now, how sustainable is Wikipedia’s model, both in terms of human resources and money? Quite often, the users enter the site and find a big sign by Mr Wales saying “please help!”. So, what are the challenges you are facing in terms of funding and in terms of people? Because Wikipedia is not purely horizontal, is it? You need editors and administrators…

Well, there is no vetting. In the Wikipedia project, the editorial role is entirely held by volunteers.

Yes, but it still has a structure…

No, not at the editorial level. There is a structure but all of them are volunteers.

Regardless of whether they are paid or not: a person who has been there for more years has more power in terms of editing…

… because they have more reputation.

So is that the structure?

Yes, but it’s unrelated to money. We have – if we might say – the bottom of the scale, or anonymous editors. These people did not create any account, they are known only by their IP address. They can edit the content, just like the others, but they have no reputation, since we don’t know them – and we watch quite carefully what they are doing. Then we have the people who created an account – these are the regular editors. They have access to more functionalities and over time if they contribute in a positive way, they accumulate better reputation. And then, when people have been there for a long time and are trusted members of the community, they may ask to become an administrator. Administrators block a user who is behaving in an inappropriate way; they can freeze an article and protect it, so nobody can edit it; and they can delete the article, as well. But actually the administrator is not really the one making the decision: the rules are established by all the users together.

And what about the financial needs?

Now that the project developed, we need some money to buy servers, to pay for the bandwidth, to pay lawyers – just in case. And mostly we need money for developers, not only to take care of servers but also to develop applications – a mobile application, for example – or new functionalities. Wikimedia Foundation owns the trademarks as well as the servers, and currently has slightly over two hundred staff members – a big part of it being developers, technical people. Aside from this, about 40 different organizations were created over time: associations either created by local activity – France, UK, South Africa – or by interests – for example, the Catalonian language. All Wikimedia organizations essentially operate through donations.

Octavio Kulesz is the director of Buenos Aires publisher Editora Teseo and Alliance-Lab, where a version of this interview originally appeared.