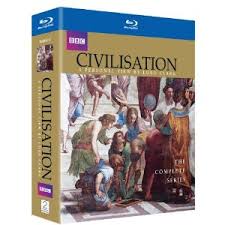 Kenneth Clark’s Civilisation was to the TV historical-series what The Sopranos was to nighttime dramas: the first and best of its kind which has never been equaled.

“What is civilization? I don’t know. I can’t define it in abstract terms—yet.

But I think I can recognize it when I see it.” –Kenneth Clark

In surely what is one of the most unique exhibitions of its kind, earlier this summer The Tate museum offered a retrospective of, not an artist, but a collector: Kenneth Clark, better known as “Lord Clark” and more informally, as “K Clark”. The exhibition’s catalogue, Kenneth Clark: Looking For Civilisation (London: Tate, 160 pp.), is now available. But calling K Clark as “collector” is like calling The Bridge of Sighs a “crossing” or Niagara Falls a “cataract.” The Times Literary Supplement recently dubbed him “The Patron Saint of Patrons” so great was his largesse in supporting and developing artists. In reality K Clark was this and more: a polymath and, if not a prophet, exactly, then not far off.

This year marks the 45th anniversary of K Clark’s epic BBC/PBS production which he himself wrote: Civilisation: A Personal View, a sprawling, 13-episode series (no “mini-“ about it) starring Clark himself. And no one else — though if you watch carefully there’s a young Patrick Stewart as Horatio in the scene from Hamlet in the section on Shakespeare. The book-tie-in, of the same title, sold over a million copies—though it is now inexplicably out of print. This is a shame if only because in the four-page “Foreword” K Clark himself gives the reasoning behind why some civilizations were left out (Islam, China)–and an apologia that the book is really “just” a transcript of the television series. But a lavishly-illustrated one at that.

Without Civilisation, one wonders if so much television that followed would have even been possible.

We are often told that we are in the midst of the “Second Golden Age of Television:” from The Sopranos (which started it all) to The Shield (which took non-pay-cable TV to new levels) to The Wire (here, feel free to mourn the loss of Bodie, D’Angelo and Stringer Bell) to Deadwood (the “most-Shakespearian” TV) and Breaking Bad (and if the judges are in a generous mood, Mad Men, Homeland, and House of Cards). I love all of these shows, and re-watch them frequently. But one has to wonder that, if K Clark’s Civilisation had never been made–let alone become such a success on both sides of the Atlantic– would Ken Burns’s nearly endless series on almost everything American been possible? Or Carl Sagan’s Cosmos? Or The Ascent of Man? Or Joseph Campbell’s Power of Myth? Or Bill Moyers many specials on everything from Poetry to Faith and Reason (both subjects covered explicitly by K Clark himself)? Or Sister Wendy Beckett’s incredible run of success on Art, both in print and on PBS?

Thus Clark’s Civilisation was to the TV historical-series what The Sopranos was to nighttime dramas: the first and best of its kind which has never been topped, or, for that matter, equaled. But Clark was first and foremost a writer, and, as Sanford Schwartz points out in his excellent piece in The New York Review of Books (8/14/2014) Clark was the first English author to write in depth on Piero della Fancesca (1951), Leonardo da Vinci’s notebooks – which he had personally studied and handled– (1939), and, almost unbelievably, the first book-length study of The Nude: A Study in Form (1956). Indeed, the English-speaking world of art-criticism was more than a bit impoverished before K Clark began his remarkable run as an art-historian, critic, supporter, and all-around champion.

However, his genius was transformed by his TV persona: looking a bit like Mr. Magoo-meets-Mad Men’s Lane Pryce (with better vision and worse teeth), Clark got out of the art gallery, where he had been the youngest person to ever run The National Gallery in London, and the classroom (he was later a professor at Oxford), and even away from his writer’s desk to take the viewer into Chartes, into the remains of Cluny, into the ruins of Tintern Abbey, and in the series finale, the streets of New York City. At one point he actually operates a letter-press — though it looks as though he might throw his back out in doing so. At another he plucks out a tune on an ancient keyboard, and throughout handles priceless objets d’art like a pitcher considering a baseball, so familiar and at home is he with such things.

One place Clark did not go — nor did he ever even mention it — was Spain: all bull-fights, inquisitions, the world’s all-time worst civil war, and back-and-forth wars between the Moors and The Catholic Kings, Clark found no “Civilisation” in Spain, and simply omitted it from a series that started with the fall of Rome (“The Skin of Our Teeth”) and ended in a 1969 maternity ward (“Heroic Materialism”). Such is the selective beauty of “A Personal View”: one can simply leave out what one feels does not fit in. And not apologize for it.

And even in a thirteen-hour series, it must be admitted that a great deal must needs be omitted, if only for reasons of time-constraint. No matter: Lord Clark dispenses with entire “civilizations” that didn’t fit his world-view and concentrates only on those that matter (to him, at least). This is either the worst case of Dead White Men praised by a WASP, or a wonderfully refreshing view of what constitutes civilization without a single care for political correctness—or what passed for it in 1969.

Nearly a half-century after its broadcast, two items stick out of Clark’s personal view: first, the debt Civilisation owes to Christianity in general and the Catholic Church in particular. While Clark does not white-out the wars of religion or the Crusades or all the matrix of internecine fighting in Rome that helped make the Reformation possible, his main concern—his central question: “Is it good for Civilisation?”—is almost always answered in the affirmative when referring to the contribution the Church made to the arts, whether it be Michaelangelo’s outrageous dome over St. Peter’s Basilica (and in one Roman episode of Civilisation, the uncanny resemblance between our current pontiff, Pope Francis, and 1969’s Pope Paul VI), or the Irish monks who, in Thomas Cahill’s phrase, helped “save Civilisation” (in the initial episode filmed on locale in the almost uninhabitable Skellig Michael in the West of Ireland).

Second, Clark ends, curiously in a way, with “kindness.” Not Charity, not knightly chivalry, not Victorian manners, not “common courtesy,” but “kindness.” There is, compared with the first twelve episodes, seemingly an absence of art in the series finale (Clark could never get into abstract-expressionism, Francis Bacon or Lucien Freud, and all of these are notable by their absence in his recent retrospective at The Tate). And in place of Art being akin to a nation’s being “civilized,” it is, rather, “kindness” that has become it’s hallmark: we are (or should be) kind to one another.

I call this “curious” because given Clark’s own personal view of World War II—he helped evacuate the priceless collections from London to Wales during the Blitz on Britain—one half-wonders if we are at the “end” of Civilization. After all, Clark lived to see “The Sun Never Sets On The British Empire” reduced to little more than “Great Britain” and a very loose commonwealth of former territories, colonies, and protectorates (which, as per the recent vote in Scotland, is perhaps more fragile than one might think).

But he was prophetic in that we must be kind to one another: his definition of this pre-dates “hate-crimes” and The Rage Against Bullying by over a generation. And it is delivered as only Clark could do so: earnestly, but with a slight sense of humor and even pathos, that was unique to the man who lives on not only in his massive art collection, but in his vision of what it means to be part of “Civilisation.” Sanford Schwartz claims that Clark is “rereadable,” and he is right. But this is one case where the TV show was actually better than the book.