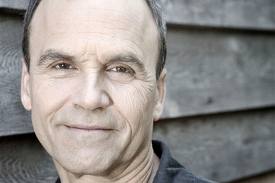 In the film Out of Print, Amazon’s Jeff Bezos and author Scott Turow are often adversaries. But they at least come close to agreement on one point. In the film Out of Print, discussed in today’s feature story, Amazon’s Jeff Bezos and author Scott Turow are often at odds on ideas about how the world of books should be run. But they at least come close to agreement on one point: people need to read to be educated.

“As long as people accept the illusion that they don’t have to learn to read and write well they will essentially be locking themselves out of any opportunity to take the levers of power in this society,” Turow adds.

But at the heart of the film is a question: will technology cripple our ability to function in the world in a way that we don’t yet understand or acknowledge?

“What is the effect of all this new technology on the young?” asks Professor Wolf. Cue to “Only 55% of children ages 3-5 were read to daily by a family member.”And then it is noted — obligatorily — that  “Children spent 7.5 hours a day in front of a TV/computer screen.” But one has to ask aloud here, “Are these medieval times?”

Certainly no one is forcing children to sit in front of a TV or computer, and if we are not reading to our kids, that’s really no one’s fault but our own.

And, as the documentary points out, the web can be misleading. In one scene, children acknowledge “You can’t believe everything you read on the internet,” and yet also complain that there are just too many books required for someone to look up a piece of information. “I’d rather just Google it,” says one boy.

Depending on your point of view, this is perhaps the most frightening part of Out of Print. That and Jeff Bezos mad-genius-esque laugh.