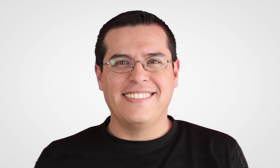 Award-winning Mexican app development studio Manuvo is at the forefront of building book apps for the Spanish-language market. “We might not have created the concept of ebook apps, but we believe that just like in football, the creator is not necessarily the best player,” says Carlos Mondragón, CEO of Mexico’s Manuvo — a company which focuses on multimedia and interactive ebooks for the Spanish-speaking market.

Manuvo was set up in 2010 in Morelia, Mexico as a software development company grouping professionals in engineering, marketing, technology, business, arts and social sciences. Harnessing the power of the “flat world” expounded by Thomas Friedmann in his bestseller work The World is Flat, team members in Canada, Chile, Canada, Mexico and the United Kingdom collaborate in virtual platforms and plan, coordinate and work together on ebook applications without the need of a physical office.

Their entry in the publishing industry dates back to mid-2010 with the creation of mobile applications for magazines and for Mexican publisher Fondo de Cultura Economica’s children´s books division. Since then they have amassed a digital catalogue of interactive poetry, children´s book albums and reference books for government offices and private publishers.

Manuvo is focusing on digital content on Latin America and in Spanish. However, their inspiration for ebook apps is purely Anglo-Saxon: T.S. Eliot´s The Wasteland, published by Touch Press; William Joyce´s The Fantastic Flying Books of Mr. Morris Lessmore, created by Moonbot Studios, WWF Together, an app on animal species developed by the Wildlife Foundation; and Eli Horowitz´s Silent History. Mondragon sees an advantage here: “If you see, all of these are in English, which is why we see a market opportunity for Spanish content.”

Apps for the Spanish-language Market In fact, one of their most successful apps belongs to their poetry catalogue: the app for Blanco, by Nobel laureate Octavio Paz, created for Conaculta and which “as of today had around 50.000 downloads, more than what the printed book ever sold during the writer´s life,” says Mondragon. Combining image and text, the poem can be read linearly, non-linearly or even listened to, as recited by the writer himself. The app also contains video fragments from interviews with scholars on the Nobel´s work, a timeline and a fragment of a symphony by American composer Richard Cornell based on the poem.

Editorial Serpentina is just one of the children’s publishers collaborating with Manuvo.

Manuvo’s work has been praised by local media and recognized for its innovative approach to e-publishing. The British Embassy in Mexico awarded them an award for Most Innovative Company in 2013. They also received the Best Design Award from technology blog The Next Day in 2012 and the Emblematic Work Award from the Iberoamerican Council of Interior Designers in 2013.

Are Ebook Apps a Viable Format?

The debate surrounding ebook apps and their viability in the market continues, as some criticize apps for being too expensive to produce and altogether difficult to “discover” on the app store. So, it’s no surprise that publishers are already acknowledging that ebook apps might make business sense when sold bundled or otherwise alongside print versions. The growth of ebook sales and the rising adoption of tablets are leading publishers to experiment with interactive digital content, sometimes with outstanding commercial success.

Online publishers at the Publishing Apps conference in London suggested that ebooks apps can take advantage of word-of-mouth marketing to spur faster sales, achieve economies of scale very quickly and strongly enhance brand power online. However, fears on cannibalization of print sales, return on investment and the need for country-specific marketing hinder full investment and lead publishers, on the contrary, to carry out gradual implementation strategies.

Presently there is no standards association drawing a line between ebooks and ebook apps. In the meantime there´s the Book App Alliance, “a new organization of industry leading authors creating interactive book for kids,” which seems to be the only venture at the moment trying to offer authors and teachers some guidance on this nascent sub-sector.

Some informal attempts have been made so far on a possible classification guide for Ebook apps. Author Karen Robertson, from the Book App Alliance, lists a series of differences and accepts that sometimes they´re similar, the limit being in how these are developed and where they are sold. Another solution is given by tech journalist Alex Knapp, who classifies ebook apps according to the type of interaction readers enjoy: DVD type, interactive story, multimedia story, ambience sound and social network app.

Quality content, particularly when it comes to apps and ebooks aimed at children, is tantamount. Daniel Donahoo, researcher on childhood learning and technology, offers a four-point checklist for librarians and teachers for assessing e-book apps based on their genres, age groups, grammar, design and types of media used.

According to Mondragon, Manuvo is looking to work publishers whose content as the potential for interactivity. “If people want to read ebooks they can do so on pdf and epub, but this is not what we are aiming for. We are looking for publishers with graphic novels, art books, photography, poetry, encyclopedias and dictionaries,” he says.

From the initial idea to their final rollout, ebook app projects go through a four-step approach that disentangles their business, creative, production and promotion variables. The process, described here, is carried out online by a project director and a multidisciplinary team of illustrators, marketing professionals, software developers, digital artists, editors and user experience specialists which varies depending on the project´s complexity. As of 2014 Manuvo has solely worked as app developer for third parties. Soon, however, they plan to become true publishers by creating applications for their own proprietary content. The first page of Codex Mendoza

Manuvo’s current projects on Mexican heritage and history include the Fondo de Cultura Economica’s app for its 80th anniversary, the Octavio Paz´s 100th anniversary app and the Codex Mendoza app with the National Institute of Anthropology and History, a “heritage repatriation project,” as Mondragon calls it, that will allow readers to browse in detail an important Aztec manuscript held in the Bodleian Library at Oxford University.

In the meantime, Manuvo is confident on the sustained development of the Latin American ebook market and the fact that libraries are slowly seeing the need to adopt ebook purchase and reading programs. Catalina Holguin, Editorial Director, believes ebooks have a competitive advantage in Latin America: “From the viewpoint of an institution, having to pay only once for an ebook, whether it receives 1 or 1,000 downloads, offers many advantages. That’s why we are interested in becoming a distribution channel. In the case of the public sector and ebooks, governments have big markets of potential readers, and eBooks here become very profitable.”