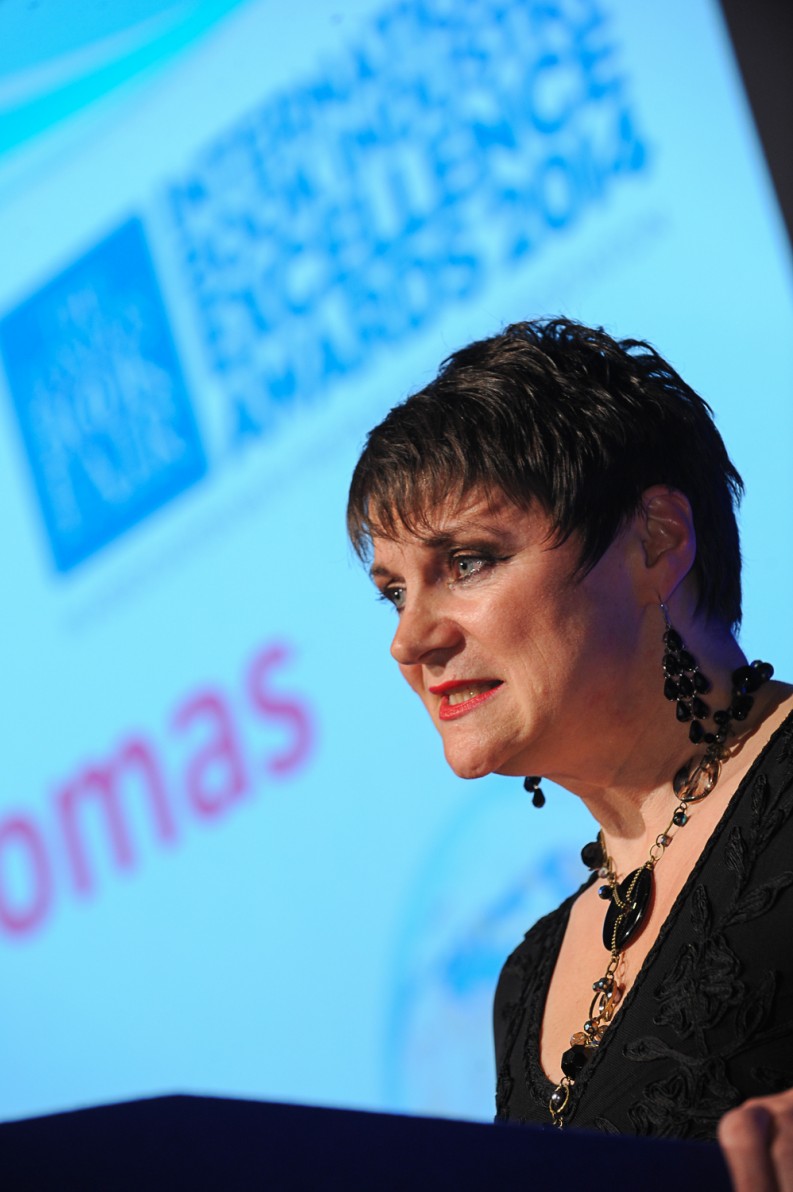 A new fixture of the London Book Fair are international awards for excellence in categories ranging from translation initiatives to digital entrepreneurship.

The global book industry saw the birth of something new on Tuesday night, something that will surely grow to become a fixture on the international publishing calendar, something that seemed so right one wondered why it had never existed before. The occasion was the inaugural International Book Industry Excellence Awards, the brainchild of London Book Fair Director Jacks Thomas who must rightly be delighted with the reaction – especially this, perhaps, from publishing doyenne, Carmen Calill of Chatto and Virago fame. “It’s so good to be at something that is not about bloody England!,” she exclaimed. “I think it’s completely wonderful. To see all these different countries – China, Pakistan, Malaysia – it can be so tedious when we always have to looking to America.” Anneli Hoeir raises a glass to being named International Literary Agent of the Year.

Sixteen awards were presented recognizing industry achievement across the globe, acknowledging the book world’s “collective success in crossing borders, cultures and languages,” in Thomas’ words. Danish agent Anneli Hoier from the Leonhardt & Hoier agency was named International Literary Agent and in one of the evening’s most moving moments Alexandra Logvinova from the House of Literature in Belarus accepted the Freedom to Publish Award on behalf of her father, Ihar Lohvinau, whose publishing work in Belarus has been banned by the Ministry of Information. “He is striving to make the bridge between Belarusian authors and the rest of the world, but it is very difficult,” she said. “The Ministry has withdrawn his license and he is now working from Lithuania. We are publishing fiction and essays which champion new values, new discourse which might not be Russian values which is what the government wants.”

Hoier became an agent back in 1968 and the clients include the writer who started the Scandinavian crime ice floe – Norway’s Henning Mankel. He is in a class of his own,” she said. “He led them all. But he is much more than a crime writer.  He is a literary author, who uses the crime format to make political statements.” The evening also saw UK agent Deborah Rogers of Rogers, Coleridge & White receive the Montegrappa Lifetime Achievement Award. Like Hoier, she too became an agent back in the Sixties – 1968 to be precise – and has a mouthwatering list of clients that includes Ian McEwan, AS Byatt, Thomas Pynchon and Kazuo Ishiguro, to name a handful. Ishiguro gave a tribute from the stage in which he said “Deborah didn’t teach me how to write, but she did teach me how to be a writer – when to say no to things and how important it is to concentrate on the work you really care about.”

Rogers herself said that it almost felt wrong to receive an award for “a lifetime of indulgence – for doing something that has given me more pleasure, more friends, more satisfaction than you can imagine.” She received a standing ovation from the audience and concluded: “In a world of tweet, blog and ‘content’ – although I hate to use that word – what survives sublimely is the book itself.”

Another popular win was Brazil’s Ricardo Almeida, president of Clube de Autores — a self-publishing platform — who was named British Council Digital Publishing Entrepreneur of the Year.

These awards can surely only grow in stature now. There will be tweaks along the way, of course – sponsors come and go (if you’re wondering about Montegrappa’s connection, their luxury pens goods were favored by Hemingway in the past and Paulo Coelho today) – and some awards may be dropped and others included. But the idea of recognising international achievements in the book trade has now been firmly established – there’s a marker in the publishing sand that was long overdue, and it will be fascinating to see what develops.

Who would have you nominated? Let us know in the comments.