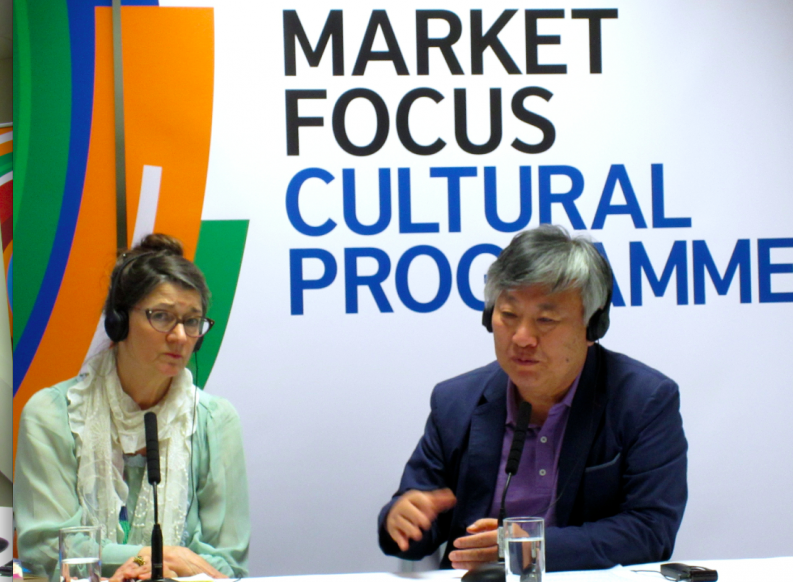 Marina Warner with Yi Mun-Yol, one of the featured writers at the London Book Fair’s Korean Market Focus Program.

In a discussion chaired by publisher Christopher Maclehose, the prize-winning Korean author Yi Mun-yol exchanged views on the importance of allegory and literary devices with the writer and chair of the Man Booker International prize Marina Warner.

Yi Mun-yol, whose novels include The Son of Man, Our Twisted Hero (Hyperion) and The Poet, (Random House), recounted in a husky voice how he had used the historical novel form for his book The Poet, in order to draw on his personal experiences. As the child of father who was a Communist who escaped to North Korea leaving his family behind, Yi Mun-yol came under a now-rescinded law of guilt by association – because his father was convicted of a crime by South Korea, he was automatically guilty as well.

“This was a huge burden and placed limits on our [family’s] hopes and dreams for the future. I could not become a public servant, a lawyer, or a policeman, we had trouble leaving the country and it was difficult for me to express myself. ”

The protagonist in The Poet is a historical figure who lived 200-odd years ago. Because he was guilty by association, could not become the scholar he wanted to be, he instead became a wandering poet.

Marina Warner said it was very clear when reading Yi Mun-yol’s work that although it tells one story – of pain, conflict, frankness and the depths of human cruelty – it is clear that there is a “moving stream” underneath, that he is speaking in coded language.

“Our Twisted Hero and The Poet are both covered with a layer of fiction; I smoothed over the stories I wanted to tell. Historical fiction is the literary mechanism to mask an autobiographical account. I thought this would move people in a different way rather than telling it literally. It becomes a collective story,” said Yi Mun-yol.

In Our Twisted Hero, the author discussed systems of power, which described the situation in South Korea when it was under military dictatorship in the mid-1980s, and the dilemma of an intellectual who is put in a position of having to cooperate with the authority.

“The rich function of allegory is something I appreciate very much, and it is very helpful for me to express my personal life and ideas this way. Given the repression at the time it was useful. Now we are not so restricted and we can use social realism as well,” said Yi Mun-yol, adding that he was one of the few Korean authors to use allegory, which is not a technique that is necessarily popular any more today.

Christopher MacLehose asked Yi Mun-yol if there had been any literary influences from neighboring Asian countries in the past 20 years and whether any writing from North Korea is being read.

“In the past we were influenced by other Asian countries, but in modern times China and Japan have been the dominant cultural forces in Korea,” commented Yi Mun-yol.

He said there was almost zero literary output coming from North Korea, and that in the case of the few non-fiction books that make their way to South Korea, “even though the language is the same, we can’t identify with them. The forms and mechanisms are completely unfamiliar. We feel like we’re reading South Korean books from 50 years ago.”

Yi Mun-yol heads a small community of authors, and beginning this year they have invited North Korean writers in exile to join it. This group is working on creating a North Korean PEN in exile in South Korea. While he finds North Korean authors’ stories very interesting, unfortunately South Koreans don’t appear to be responsive to what they have to say, remarked Yi Mun-yol . This is due, he said, to a “an ideological malaise. I believe it comes down to ideological differences.  If there is a film that is critical about North Korean society people don’t watch it, ironically if there is blockbuster film about North Korea being a bad guy and the good guy is American, then people will go watch it.”

Perhaps, suggested Marina Warner, this could be related to the skill of storyteller disguising the true subject – is it possible that the North Korean writers are exposing themselves too much; perhaps readers are embarrassed by too much nakedness?

“When it comes to their literary technique and style, they are not using allegory as a mechanism. They are giving factual accounts,” confirmed Yi Mun-yol.

“I provide a space for the [North Korean] writers, they write whatever they like,” he added.