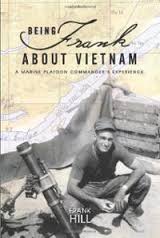 Being Frank About Vietnam: A Marine Platoon Commander’s Experience, by Frank Hill: This startling memoir offers an unvarnished look at Hill’s tour of duty in Vietnam as he leads his platoon in a fierce battle zone 20 miles south of Da Nang. In detailing such uncomfortable truths as a practice known as “fragging” — when soldiers desperate to leave the war purposefully injured themselves during battle — he delivers a remarkably authentic and moving personal account of this unpopular war. Read review.

Uniquely Human: The Basis of Human Rights, by Gabriel Moran. Moran, one of the nation’s leading published experts on the subjects of religion and ethics, offers this fascinating exploration of human rights, backing his narrative with an unassailable depth of research. Directed at an academic rather than general audience, this book should be adopted as a necessary addition to courses on international law and ethics. Read review. Barr’s Meadow: (Julian’s Private Scrapbook: Part One), by Eldot: Set at a Boy Scout camp in the early ‘60s, this story centers on a gay young man named Julian as it explores the daily activities of scout camp, focusing mainly on the gay characters and Julian’s sexual thoughts, and the politics of sex between teenage boys. Reflecting on same-gender male sexuality while generally avoiding the salacious, the author delivers a work that is Intelligent, moving, well-grounded and memorable. Read review.

The Bribe, by Oskar Klausenstock: Retired radiologist and Holocaust survivor Klausenstock relates the story of what happens when elderly Nathan Klein, who is recovering from a stroke in a nursing home, recognizes another patient as a Nazi officer whose battalion demolished Klein’s native Polish ghetto and slaughtered most of its inhabitants. Gradually, the two men begin a correspondence that brings startling revelations. Well paced and convincingly drawn, the story will satisfy anyone looking for a redemptive read. Read review.

The Adventures of Princess Ebony, by Mira Malic: This fanciful story revolves around a princess who was born unable to open her eyes. When she befriends a fairy who restores her sight, she inadvertently angers a troublesome witch — until her compassion saves the day. Gorgeous, textured illustrations bring the story to life and the book skillfully weaves together themes of reliance, forgiveness and collaboration. Read review.

Into the Heart of Reality: The Inner Voice, by Safiullah: This series of spiritual reflections on God, nature, psychology and Islam challenges readers to go beyond the world of sensation and emotion and open their minds to a new understanding of the Master (Allah) and this temporal world. Written with suppleness, tenderness and intelligence, it will appeal not just to Muslim readers but also to others  looking for spiritual renewal. Read review.

Strokes: A Conversation with a Caregiver, by Dorothy Goudie:  Striking just the right tone of humility, confession and a dash of self-deprecation, Goudie recounts her experiences caring for her husband after he suffered a stroke while on vacation. In the process, the author offers readers commonsense advice on how not to lose themselves when life and expectations suddenly go south. Read review.