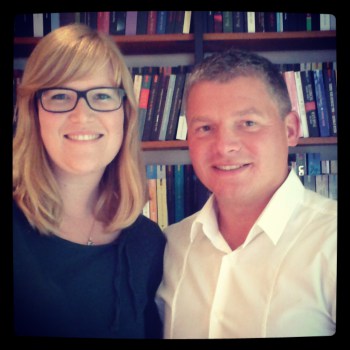 Germany’s Rowohlt and Berlin-based startup Das Wilde Dutzend (The Wild Dozen) embody the latest thinking in transmedia storytelling, one is re-imagining the thriller and the other, fairy tales.

In the German publishing landscape, transmedia storytelling has been utilized to bring stories to life and enable reader involvement well beyond the book itself. Transmedia campaigns which combine media such as blogs, social media platforms, photos and videos to introduce readers to a book’s backstory are developed by creative digital and marketing agencies in cooperation with publishers and authors.

For instance, the Berlin-based agency “vm people” are one of the trailblazers in this field. The 10-year-old creative agency has come up with transmedia campaigns for all kinds of books, from young adult to crime fiction and guerrilla gardening.

One of their most recent collaborations is Deathbook, a serial thriller in 10 installments. Deathbook is more than a book — it’s a multimedia world that manifests itself throughout social media, on blogs and via QR codes, in which a horror story is brewing that threatens to spill over into real life. The concept is the brainchild of the German Rowohlt Verlag, a large publisher of trade fiction and nonfiction which belongs to the Holtzbrinck Group. Earlier this year, the publishing house enlisted thriller author Andreas Winkelmann to write Deathbook, a digital serial novel about a string of inexplainable deaths related to the internet and a “network of death.” However, readers don’t have to wait for the first serial to be released to enter the story. On the “Posten und Sterben” (“post and die” ) blog, readers can delve into the story via the ramblings of a frightened blogger trying to warn the online community away from an evil force on the Internet. Behind the blogger character is not the author Winkelmann, but the freelance writer and slam poet Insa Kohler. Kohler was chosen through an open call for submissions to participate in a workshop with the author and publishing team, along with filmmakers and vm-people, where the creative team developed the framework of the thriller story and its myriad manifestations.

For Insa Kohler, writing the paranoid blogger’s blog entries was akin to acting. In the Rowohlt workshop she and the creative team discussed  every blog entry and the role each would play in the story at large. “It was actually a lot of fun to write from his paranoid perspective,” Insa admitted. “I just tried to imagine as best as I could what he might feel like. I mostly wrote in a nice, sunny environment during the summer, so it wasn’t hard to shake of the paranoia when I was done for the day.”

However, when the blog went live, Insa couldn’t help becoming a little paranoid herself. “To be honest, I was a bit scared that some people would actually take it too serious and freak out or do worse.” Since then she has followed the discussions about her blog entries and has realized how much fun people are having trying to solve the puzzle. Kohler describes the blog’s role in the story: “The blog is a prolog for the most part, but it also plays an important role within the story. So does the blogger himself. At the moment it is a teaser and it will make more sense when people are actually able to ‘read’ the book. ‘Read’ because you can also watch and hear it.”

In fact, part of the Deathbook team’s goal with this project is to create a truly transmedial text – a story which only works when the “reader” perceives it in all its dimensions to put the pieces together. Each image and video, each GPS coordinate hinted at represents another aspect of the story, another rabbit hole which participants can chose to enter. The 10 apps / enhanced ebooks which contain the bulk of the story likewise use multimedia, including embedded videos and animated chat exchanges. For those who prefer their stories in more traditional packaging, Rowohlt will be bringing out all ten parts as a print book this month. The Berlin-based publisher Das Wilde Dutzend has been including readers in their transmedia stories since 2009, when the publisher was founded by Dorothea Martin and Simone Veenstra. This small press has its own founding myth, and claims to act in the interests of a secret lodge dedicated to “bringing mysteries and secrets from literary and cultural history into the modern world.”

Their first release, Die Guten, die Bösen und die Toten, was also accompanied by an elaborate background story: Adele, the turn-of-the-century detective who was commissioned to find the historian and morgue photographer, Johan von Riepenbreuch. His collection of macabre writings and poetry was supposedly discovered in the attic of the Hamburg artist Ebeneeza K, who illustrated his eerie writings.

In an interview, the co-founder of the Wilde Dutzend, Dorothea Martin, explained her multimedia approach to publishing. “One of the things our press focuses on is enriching our traditionally produced books with a transmedial series all about the backstory and its secrets.” While the press produces high-quality hardcover books with color illustrations, the contents and stories of the books extend well beyond their covers. Readers are invited to spin the tales further in storytelling events, book binding workshops or fairytale-themed dinners, for example. Each book and art object which the press has released comes with its own mysterious backstory, such as their most recent book, Wer kann für Böse Träume (Who can be faulted for bad dreams?), a collection of modern retellings of the Grimm fairytales, with a small, transmedia twist: supposedly, the writers included in this volume all had access to the Wilde Dutzend’s “secret Grimm files.” The anthology features some of the crème de la crème of contemporary German writers, such as Angelika Klüssendorf  (whose novel Das Mädchen was nominated for the German Book Prize in 2011), Thomas van Steinaecker, Ulrike Draesner and Finn Ole Heinrich, among others, and the stories are accompanied by dark and fantastical illustrations, as well as sidenotes and background information from the “secret files.”

Earlier this year, the press organized “Wonderland”, an all-day fairytale event at the historic Babylon cinema in Berlin. Alongside short films, storytelling and live radio plays, the Wild Dozen organized a fairytale contest on Twitter and invited two of the authors to read from the press’s latest anthology. Christiane Neudecker, whose story the collection was named after, sent a chill down listeners’ spines with her reading, and clearly relished the chance to substantiate the myths surrounding the anthology’s origin in the question and answer session. In the Wilde Dutzend headquarters in Berlin, fans can step back 100 years in time and see a reconstruction of Adele’s detective office, which is reminiscent of 1920s Berlin. In Berlin, the press organizes monthly salon evenings at which readers can follow Adele’s trail of clues and come closer to solving several of the mysteries.

These two projects are just a small sampling of the transmedia storytelling initiatives in Germany. For more information and to follow the latest developments, check out the Transmedia Storytelling Berlin blog.