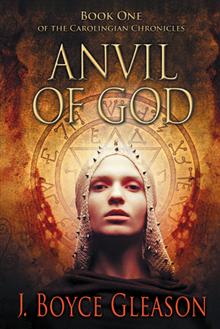 Anvil of God, by J. Boyce Gleason: This stellar debut historical novel chronicles the chaos that ensues when Frankish leader Charles Martel decides to divide Francia between his sons after his death; when that occurs, in 741, the siblings soon find themselves at great odds. The resulting story is meticulously researched, vividly imagined and impossible to put down — a labyrinthine-like plot as compelling as anything written by literary giants such as Ken Follett, Bernard Cornwell and Philippa Gregory. Read review.

Dark Against the Sky: A Climbing Boy’s Story, by Stephen B. Hauge: An accomplished Dickensian morality tale, this story for young adults is set in 1834 and revolves around a boy who is snatched from his parents and coerced into working for a master sweep. Determined to reunite with his parents, the boy and a friend devise a risky and adventurous escape plan. This winning tale is an authentic, evocative and classic portrayal of the human capacity to endure.  Read review. Behind Success, by Gil Francisco: This eloquent, tender and touching memoir tells of the author’s experiences as a teacher, coach and principal in an urban school. Francisco recalls one student with social deficiencies who becomes a finalist in the Westinghouse Talent Search, as well as others who suffer unfair and tragic fates. All of his memories are rendered in often-poetic prose, executed with flair. Read review.

Normalizing and Treating Mental Illness: The Attainment of Wholeness, by Charles E. Williams, Ph.D.: Psychologist and psychotherapist Williams details the variables behind many mental illnesses and offers methods to contain and treat these diseases, with the aim of showing that such illnesses can be monitored, contained and controlled. Combining compassion with sage advice, the author delivers solid ideas in a succinct, explanatory, yet personal format to guide professionals and help lift the stigma of mental illness. Read review.

What the Hell Are the Neurons Up To?, by Graham Collier:  Confronting an enduring question of philosophy – the mind-body problem – retired professor Collier explores the neuroscience on this topic, while also finding room for a soul that exists in some mysterious relationship to the machine in our skulls. More rumination than argument, Collier’s book offers thoughts on everything from his travels in Antarctica to the writings of Aristotle, Jung and Wordsworth and represents a culmination of a life of reflection on the arts and sciences. Ultimately, this title is an edifying tribute to what is most human in human beings. Read review.

A Candle for Kiri, by Edna Mae Holm: In this well-crafted historical romance set in the early 1900s, orphan Kiri meets handsome tool-and-die apprentice Einar, who convinces her to marry him and move from their native Sweden to Wisconsin. When she unexpectedly falls for young and kind Pastor Hanson, trouble ensues. Holm weaves together multiple subplots, well-drawn characters and historical detail to deliver a tale surging with life. Read review.

The Devil Child, by Parley J. Cooper:  In this suspenseful gothic novel, a young woman struggles to free herself from the psychological bonds of Clarke House, once the proud family home, now a crumbling mansion. Known as a half-wit subject to fits, the young woman believes in demons and witches, while an aging friend tries to help her face the truth. The author skillfully develops an underlying level of tension and eeriness that keeps readers turning the pages. Read review.

Close Encounters on a Golf Course, by Lena Hagman: In these 19 vignettes culled from three decades of playing golf as a “single” in what was, until recently, a man’s world, Swedish author Hagman joyfully relates the experience of being paired with mostly male strangers and the transcendence she feels by merely setting foot on the grounds of many iconic courses around the world. Those who share her passion for the game will find this book a delight. Read review.

Don’t “Bleeping” Do That: How NOT to Manage a Small Business, by Sarel Gous: A straight talker who isn’t interested in spreadsheets and business proposals as much as commonsense advice on the challenges that confront small business owners, Gous offers fatherly advice borne from experience on everything from managing emotions to navigating spousal landmines, all with the geniality and humor that will make small business owners feel as if they have a caring mentor on hand. Read review.

Islands in the Sky, by David Gates: In 1968, Gates shipped out to the Falkland Islands to be a teacher. This entertaining memoir recounts his colorful stories, including the tale of two brothers who were so isolated they created their own language; the student who so hated school, he came at Gates with a knife; and the “2-nighters,” parties that were as memorable as the name implies. Funny, sad and charming all at once, the book offers an excellent portrayal of a way of life now long gone. Read review.

Supporting Player: My Life Upon the Wicked Stage, by Richard Seff: The author details his career as an actor who worked with some of the greats in the middle third of the 20th century – Edward G. Robinson, Julie Andrews, Bob Fosse, Ethel Merman – yet always in the background: the military cadet who betrays a fellow student, the inmate in the cell two doors down from the star. It’s that slightly off-center perspective that gives Supporting Player its heft. Coupled with Seff’s matter-of-fact voice that never strays into hagiography, his book presents that rarest of literary things: a story that deserves telling. Read review.

The Man Who Made Love to More Women than Casanova, by Lorenzo Baccala: During two days and nights at the St. Regis Hotel in New York, Baccala interviewed his longtime friend “G,” a man who estimates having had sexual encounters with nearly 300 women over 30 years. Here, G shares his sensual techniques and his affinity for women, covering topics ranging from faking orgasms and encounters in closed quarters to tales of being “Held Hostage by a Nyphomaniac,” Although readers may sigh on occasion over G’s super-sized id, they’re just as likely to want to pull up a velvet seat and hear more. Read review.