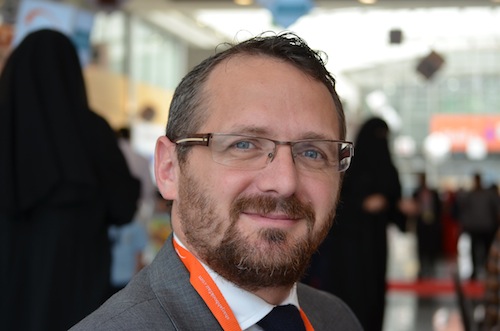 SHARJAH, UAE: If you want a good overview of what is happening in the Gulf states you could do worse than talk to Matt Cowdery, Hachette’s man in the Middle East. He has lived and worked in the UAE for five years and carried the bag for the publishing group since 2011.

The region presents a kaleidoscope of different approaches and cultures that can make a salesman’s job both fascinating and frustrating.  It seems that when it comes to the book industry in the GCC, an Arabic version of the famous Oscar Wilde line applies: it’s a case of 22 countries divided by a common language – except that even the language is far from common, with numerous regional variations as any translator will tell you.

While excited school children poured into the Expo Centre for the Sharjah International Book Fair this week, Cowdery reflected on the past year. “There have been a lot of issues in the Gulf around importation certificates. You need these for every title and what we all want, of course, is a fast, clear and cheap process. We respect the cultural considerations of each territory, but we need to know how it works. It’s different in each country. In Saudi, for example, it’s clear, fast and efficient. But Qatar has gone the other way. There’s a bewildering, complex process of sending samples for the ministry there, and it can take up to two months by which time your book’s ‘window’ may have gone.  So we tend to focus on less time-sensitive books there.

“In the UAE they introduced something called Decree 12 which was proposing a small charge on each certificate, which could prove very expensive if it’s a large order. But thanks to the work of the EPA [Emirates Publishing Association], the UK’s PA [Publishers Association] and the AAP [Association of American Publishers], they listened and the change was suspended.”

He said the Arab Spring has led to the opening up of some markets and the decline of others. “Syria has gone to zero for obvious reasons, but we’re very strong in Lebanon on the back of that. Egypt has been heavily hit — the whole process of ordinary life has become difficult there. There are demos, curfews, the electricity supply goes down which can affect printing, there’s no good access to currency so payment becomes a problem, and just the whole simple process of shopping is harder.

“But Saudi has been very good, and we’re up in Bahrain, Oman and Kuwait. The UAE is flat and in Israel there are interesting things going on because of what they call ‘the French book law,’ by which they mean price protection.  Because Hebrew language books cannot be discounted now, Israeli retailers are saying that next year will be the year of international books as a result, because English language versions of those same trade titles will appear good value.”

In terms of what is popular in the UAE, Cowdery says Hachette has enjoyed a “stellar year” with what he calls “soft business,” titles like The Art of Thinking Clearly, Hatching Twitter and Finding the Next Steve Jobs. “Those books appeal to the aspirational mind set of people here, and if a title has been shortlisted for the FT Goldman Sachs Business Book of the Year, that carries a lot of weight with retailers.”

One market that is untapped at the moment is Iran, he believes. “The on-going sanctions are annoying. Books are exempted items, but the banks are still not accepting payments. Some US banks do, but not UK ones. We’re hopeful that with the new leader there, this will lead to an easing of the sanctions. There’s a good, potential market there. You have a relatively large, well-educated middle class, and there’s a strong literary culture going back to the Persian poets. We’d like to trade in that market.”

Having worked for numerous Waterstones branches in the UK, a desire to travel and an interest in the region brought him and his wife Stacy to Dubai in 2009. He worked for booksellers Magrudys at first, and then came the move to Hachette.

They have a 20-month-old son, Milo, and home is in Dubai whose geographic location and airport connections make it the perfect jumping off point, both for work and leisure travel. “India is close — we’ve been to Rajasthan recently — and Oman is beautiful. Muscat is lovely, with the mountains right down to the sea. It’s a low-rise city, not like Dubai, and they have certain regulations about architectural styles which has made it seem more Arabic.”

On the work side he has just made his first trip to Morocco, as yet a very Francophone market, but one that he wants to work at. “At the moment, 90% of the foreign language books you’ll see there will be in French, but there’s a lot of English visitors there — half the planes you see taking off are EasyJet to Gatwick. There is also an increasing interest in learning English among the young. So we’re just at the start there — it’s about building relationships.”

Next up is Qatar, where he is off the Doha Book Fair in December at which the UK is guest of honor. Of course, with his job requiring so many trips, sometimes a certain amount of negotiating is required with the ‘home office,’ as it were. But don’t worry – he’s sorted this one. “The whole family’s coming with me…”