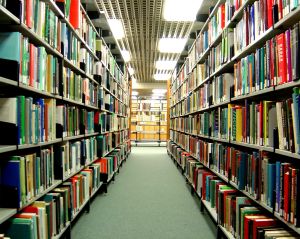 According to a new report from the Pew Research Center even though Americans between the ages of 16-29 are heavy users of technology, they are more likely than their older counterparts to both use and appreciate libraries as physical spaces.

Perhaps surprisingly, a majority of those polled under the age of 30 said that it was “very important” for libraries to have librarians and books available for borrowing, and few thought that libraries should fully automate or move their services online.

As one of the study’s authors, Kathryn Zickuhr said:

“Younger Americans — those ages 16-29 — exhibit a fascinating mix of habits and preferences when it comes to reading, libraries, and technology. Almost all Americans under age 30 are online, and they are more likely than older patrons to use libraries’ computer and internet connections; however, they are also still closely bound to print, as three-quarters (75%) of younger Americans say they have read at least one book in print in the past year, compared with 64% of adults ages 30 and older.”

“Similarly, younger Americans’ library usage reflect a blend of traditional and technological services. Americans under age 30 are just as likely as older adults to visit the library, and once there they borrow print books and browse the shelves at similar rates.” Zickuhr toldShelf Awareness, “Some of this stems from the demands of school or work, yet some likely lies in their current personal preferences. And this group’s priorities and expectations for libraries likewise reflect a mix of traditional and technological services.”

But let’s also be honest here, the age group polled 16-29 year olds, include a large number of high school and college students, a group that will likely be required to read print books — which still dominate classrooms — and use libraries on a regular basis.

Among the study’s highlights:

* As with other age groups, younger Americans were significantly more likely to have read an ebook during 2012 than a year earlier. Among all those ages 16-29, 19% read an e-book during 2011, while 25% did so in 2012. At the same time, however, print reading among younger Americans has remained steady: When asked if they had read at least one print book in the past year, the same proportion (75%) of Americans under age 30 said they had both in 2011 and in 2012.

In fact, younger Americans under age 30 are now significantly more likely than older adults to have read a book in print in the past year (75% of all Americans ages 16-29 say this, compared with 64% of those ages 30 and older). And more than eight in ten (85%) older teens ages 16-17 read a print book in the past year, making them significantly more likely to have done so than any other age group.

* The under-30 age group remains anchored in the digital age, but retains a strong relationship with print media and an affinity for libraries. Moreover, younger Americans have a broad understanding of what a library is and can be—a place for accessing printed books as well as digital resources, that remains at its core a physical space.

Overall, most Americans under age 30 say it is “very important” for libraries to have librarians and books for borrowing; they are more ambivalent as to whether libraries should automate most library services or move most services online. Younger Americans under age 30 are just as likely as older adults to visit the library, and younger patrons borrow print books, browse the shelves, or use research databases at similar rates to older patrons; finally, younger library visitors are more likely to use the computer or internet at a library, and more likely to see assistance from librarians while doing so.

Additionally, younger patrons are significantly more likely than older library visitors to use the library as a space to sit and ready, study, or consume media—some 60% of younger library patrons have done that in the past 12 months, compared with 45% of those ages 30 and older. And most younger Americans say that libraries should have completely separate locations or spaces for different services, such as children’s services, computer labs, reading spaces, and meeting rooms: 57% agree that libraries should “definitely” do this.

Along those lines, patrons and librarians in our focus groups often identified teen hangout spaces as especially important to keep separate from the main reading or lounge areas, not only to reduce noise and interruptions for other patrons, but also to give younger patrons a sense of independence and ownership