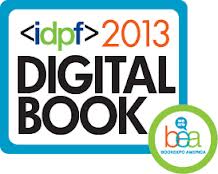 “It’s now the second phase of ebooks,” says IDPF executive director Bill McCoy. “Phase one, ebooks 1.0, was acknowledging that ebooks have matured into an actual business. That centered around e-ink, which is most suitable for linear narrative. Now we’re crossing the threshold. BISG says readers now prefer tablets and smartphones over dedicated ereaders. That changes the view for publishers.”

The primary question now for publishers is “what makes sense to publish on a color, interactive devices that is one-click away from the world,” says McCoy.

Today, as the IDPF Digital Book 2013 Conference convenes at BookExpo America, the focus of conversation will center around answering this very pertinent question.

“The main concern is Increasing connection between the ebook world and the broader platform. We’re looking at the future of the digitized book, and, for example, are going to be talking about the open web platform. At IDPF, we have been doing a lot of work to figure out how to bring together the various worlds of content, whether a publisher is producing a book, an app or a web site and how to use EPUB and the broader web platform.

He adds, “I hear a lot of people who say they are book publishers who don’t want to do anything with a web site, because they believe people will read it for free. But what we want to say is that not everything developed with web technology needs to become a web site. It can become other things.”

The message implicit in this is that open web publishing can with hundreds of developers will free publishers to experiment outside the existing dominant platforms.

McCoy’s belief is that  Adobe and Microsoft can’t compete against an open web platform with dozens or hundreds of developers. In this same way, he notes that publishers may believe that “Amazon has won,” but the truth is that “Amazon has won in the same way that AOL won the web.”