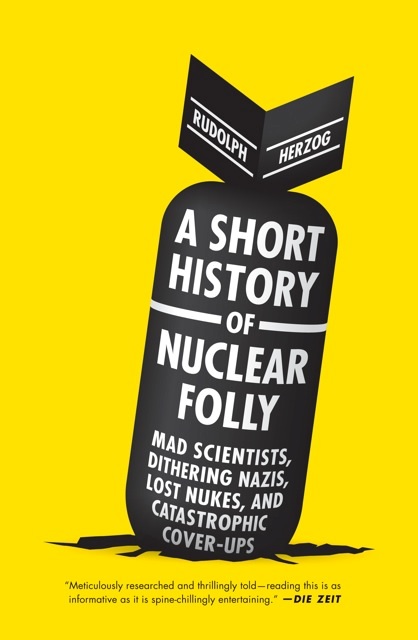 Herzog’s A Short History of Nuclear Folly has already received acclaim in Germany, and is described by Die Zeit as “Meticulously researched and thrillingly told—reading this is as informative as it is spine-chillingly entertaining.”

And indeed, Herzog’s narrative voice pulls the reader along on a journey through episodes of history’s most thoughtless uses of nuclear technology. Herzog’s narrative focuses on some of the lesser-known disasters such as “Broken Arrows” (wherein 40 nuclear weapons were lost during the Cold War), and draws from information gleaned from scientists who have only just spoken out, along with quite a bit of archival material.

Herzog also draws on memories from his own childhood during the end of the Cold War in Germany. He spends some time on a discussion of the evidence showing that the Nazis had the ability to make atomic weapons but didn’t, information that would probably shock anyone.

About the author and translator:

Rudolph Herzog is the author of Dead Funny: Humor in Hitler’s Germany. His documentary on humor in the Third Reich, Laughing with Hitler, scored top audience ratings on German Channel 1 and was also broadcast on the BBC. He is the son of celebrated filmmaker Werner Herzog.

Jefferson Chase is one of the foremost translators of German history.