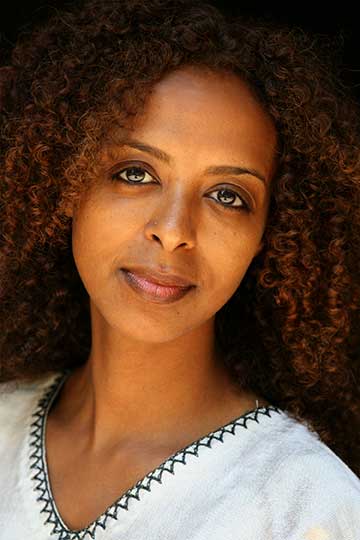 Far, far from the New York publishing establishment, out on the Great American Plains, the Puterbaugh Festival of International Literature and Culture has quietly brought many of the world’s greatest writers to the University of Oklahoma in the springtime for over forty years now. This year’s Puterbaugh Festival will take place April 9-12 in Norman, Oklahoma, and will feature a keynote address by the 2013 Puterbaugh Fellow, Ethiopian writer Maaza Mengiste, author of the novel, Beneath the Lion’s Gaze. Other events throughout the weekend will include masterclasses, panel discussions, and workshops for high school students with photographer Phil Borges and Oklahoma’s poet laureate, Nathan Brown.

The Puterbaugh Festival of International Literature and Culture is just weeks away, and we’re proud to announce the official launch of the festival website at www.puterbaughfestival.org. Maaza Mengiste will be the featured writer at this April's festival. (Photo: MiramBerkley)

The site also adapts as a web app for your mobile devices! Download it now to easily access the schedule of events, read bios of the authors and photographers, and keep up with the news and events surrounding the festival straight from your mobile device or tablet.

The spring 2013 Puterbaugh Festival will highlight the work of Ethiopian writer Maaza Mengiste, World Literature Today’s 2013 Puterbaugh Fellow. WLT has also invited internationally renowned photographer Phil Borges to speak at the opening of the exhibition Stirring the Fire: A Global Movement to Empower Women and Girls. The Puterbaugh Festivals are part of a forty-year tradition through which WLT brings world-class writers (often future winners of the Nobel Prize) to the University of Oklahoma campus for an international symposium, public talks, and engagement with students and the general public.

The Puterbaugh Festival started in 1968 and originally focused on literature from the Hispanic world, but has since expanded its focus to literatures from all language groups across the world (from World Literature’s Today’s website), with a strong emphasis throughout the festival on personalized interaction between the writer and the public, especially students:

The Puterbaugh Festivals of World Literature & Culture are made possible by a generous grant from the J. G. Puterbaugh Foundation of McAlester, Oklahoma, and sponsored by World Literature Today, the University of Oklahoma’s award-winning magazine of international literature and culture, founded in 1927. A rich tradition in support of literary and international studies at OU, the Puterbaugh Festivals bring the world’s greatest authors—often a winner or a soon-to-be winner of the Nobel Prize—to the OU campus for a course built around the author’s work, an international symposium, public talks and performances, and engagement with students, many of whom receive fellowships to study the Puterbaugh fellow’s work. Since 1968, the Puterbaugh series has furthered the educations of thousands of OU students.

Between World Literature Today, the Puterbaugh and Neustadt Festivals of International Literature and Culture, the Neustadt Prize, and the University of Oklahoma Press, something special is going on with the promotion and support of international literature in Norman.