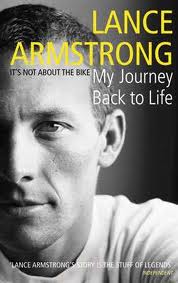 Reuters and other news sources report that two California men have sued Lance Armstrong and his book publishers for fraud and false advertising, claiming that his two best-selling memoirs, It’s Not About the Bike and Every Second Counts, labeled as non-fiction, were revealed to be filled with fabrications after his confessions last week to systematic doping. (The best headline about the story came from Shelf Awareness: “It’s All About the Bilk.”)

Their lawsuit accuses Armstrong and his publishers, Penguin and Random House, of violating consumer protection laws on false advertising and fraud.

The named plaintiffs in the suit were Rob Stutzman, a public relations executive who served as a deputy chief of staff for former California Governor Arnold Schwarzenegger, and Jonathan Wheeler, a chef and amateur cyclist.

The pair said they had purchased the books because they believed in Armstrong and his inspiring story of coming back with from a near fatal bout with testicular cancer to win the Tour de France seven times. But following his doping confession, Stutzman and Wheeler said they felt “duped” “cheated” and “betrayed” by the realization that the books, marketed as inspirational true-life memoirs, were replete with fabrications.

Lawyers for the purported class of Armstrong book buyers say readers are entitled to restitution and possible statutory and punitive damages for deceptions. They say that Random House and Penguin should have detected these, despite the fact that Armstrong had passed drug screenings for various international cycling competitions.

A similar lawsuit was filed in 2011 against Greg Mortenson, co-author of the best selling Three Cups of Tea, which accused him of fabricating much of his story about promoting education for girls in Pakistan and Afghanistan.

That suit, which alleged fraud and unjust enrichment, was dismissed last year by a federal judge in Montana.

(That case was inspired, at least in part, by the $2.75 million settlement from James Frey — author of A Million Little Pieces — who, in a not-so-remarkable coincidence, also confessed his deception in an interview with Oprah Winfrey. That settlement was a rare victory for angry book buyers.)

One potentially significant advantage held by litigants suing Armstrong (as opposed to Mortenson) is that their case was filed under California’s exceptionally plaintiff-friendly consumer protection laws.

Penguin will be represented by the firm Dorsey & Whitney, which won the Mortenson case for the publisher. It is reported that lawyers are certain to raise the same First Amendment and implied-duty defenses in the new case as in the Three Cups suit.