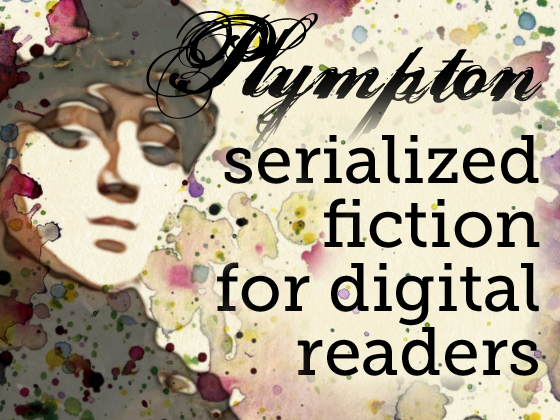 Literary start-up Plympton came onto the digital publishing scene in September when its first three serialized e-books were announced as part of Amazon’s new Kindle Serials program. Now, co-founders Jennifer 8. Lee and Yael Goldstein Love continue to navigate the uncharted waters of the digital age as they work on their ten forthcoming titles, the next of which is set to come out in January. Putting out feelers in immediate publishing circles is one way titles have been acquired, but open submissions are accepted via Plympton’s website all year round.

In fact, two of the three initial Plympton/Amazon titles — Hacker Mom and The Many Lives of Lilith Lane — were chosen from about 70 submissions that came in via open submissions. The third title, Love Is Strong as Death, was written by Carolyn Nash, author of the previously successful Kindle Single, The Trunk Key. Nash had a full-length novel that was too long for a Kindle Single, and so with some appropriate changes it was transformed into a serial. The Many Lives of Lilith Lane, by E.V. Anderson

The three serials are doing well, which novelist and Plympton’s editorial director, Love, attributes, in part, to word of mouth. She says it also helps that people are becoming familiar with the serial model.

“The Many Lives of Lilith Lane has these incredibly avid followers on Goodreads,” Love told Publishing Perspectives. “We’re getting a lot of e-mail from people asking if we’re going to get a second volume. So it seems like excitement is really growing.”

No concrete sales figures can be provided under the terms of Plympton’s contract with Amazon. However, in an e-mail exchange with Publishing Perspectives, author and former New York Times reporter Lee — who serves as Plympton’s president and works on the marketing and business sides of the company — notes Love Is Strong as Death hit #1 in Kindle Serials and #103 in Kindle paid overall. Hacker Mom hit #2 and cracked the top 300. The Many Lives of Lilith Lane cracked the top 800.

The Amazon deal involves co-branding of the first three titles with Amazon Publishing. The revenue will be split between Amazon and Plympton, “which then gives a generous royalty to its authors,” says Lee. Going forward, Plympton will look at publishing with Kindle Direct Publishing and other publisher companies. These deals will result in a different revenue split between Plympton, its publishing partners and its authors.

Under the Amazon deal, each book will be made available in paperback once the serial run is finished (Lilith Lane’s paperback version was published in mid-November), though it’s unclear if this will be the case with forthcoming titles. Because Plympton currently lacks the infrastructure on their own, there have been talks with a few publishing houses about possible partnerships. Currently, pricing is set at $1.99 for each series, a price that seems to be sticking. Though, as Love explains, Amazon has the advantage of not having to break even or turn a profit because they have economies of scale on their side. Going forward, then, Plympton will likely have to raise this price slightly. A subscription model is an option, and Love says she and Lee are playing around with how much that will cost.

“We want it to be affordable,” she says. “We want it to be something you don’t have to think about very deeply before you make the decision to buy it. It has to be sort of an impulse-buy price point to work. So it won’t be going up very high, but [it won’t stay at] $1.99.” The co-founders, joined by Plympton’s production editor, Justin Keenan, former managing editor of The Harvard Book Review, work with their authors from the initial concepts to the finished product.

“We’re finding that a gold mine of possible serial fiction is coming from novellas,” Love says. “There are so many novelists out there who have written a novella because they were compelled to.”

Agents tend to be wary of novellas, as they are difficult to sell. However, Love says it is wonderfully shocking how many novellas lend themselves well to serialization. She says that usually some “plottening up” is necessary, but it’s not a terribly radical process.

So far, the three Plympton/Amazon titles trend toward the commercial fiction market, but Love says the forthcoming titles are both commercial in plot and literary in their prose and characterization.

“With a serial you need that compelling plot, where they’re going to make you just die to read the next installment.” She adds that fast-moving plot allows for reader input, which can be shared on Plympton’s Facebook and  Twitter pages. (Going forward, the plan is to create a more proprietary forum for feedback.) For example, a reader can say that he doesn’t like what just happened or how a character behaved, and there would actually be room for the author to change course or at least slightly alter the story. This feedback can also be helpful in relieving the loneliness and isolation that often accompanies writers as they work on a book.

“But there are also incredible dangers to [reader feedback],” says Love. “It’s very hard to maintain your own vision when you have dozens if not hundreds of voices telling you what they think your vision should be. I think we have to tread very lightly around it and figure out for each writer how they’re going to navigate that.”

For reader feedback to be effective in determining how a serial proceeds — which is a big part of Plympton’s vision — installments must be produced just as the author writes them. For the time being, though, writers have not yet been pressured to produce installments as they go along, and the titles that are in the works are being completed before the installments are published.

“That pressure [for writers] to produce without a break—that’s terrifying,” says Love. “I think more terrifying is to publish something without knowing how it’s going to end—publishing a first installment not really knowing how you’re going to wrap it up. You know, usually when you get to the end of a draft of a novel, you realize how utterly wrong you were about the first one hundred pages.”

But, as the installment format becomes more familiar, she anticipates that writers, in turn, will become less and less frightened by it.

Role of a Publishing House in the Digital Age Plympton was created as a “third layer” in the publishing world, described on its website as “a nimble alternative to the major publishers and online markets.” Serialized fiction is regarded as the perfect medium for creating this third layer because of “its competitive digital price-point, its capacity for generating audience, and its built-in emphasis on strong storytelling.”

Plympton is different from Byliner — which Love cites as its biggest competition — in that while Plympton focuses exclusively on serial fiction, Byliner’s fiction is usually closer in length to that of a short story. She says the only title she sees as in direct competition with Plympton is Margaret Atwood’s serial novel, Positron, which she notes is “wonderful.”

Love shares that the biggest challenge for Plympton is trying to figure out what it is that a publishing house needs to be in this digital age.

“It’s really not clear what role you want to serve, actually. That’s something that we’re still figuring out.”

As an example, she points to Plympton’s relationship with its readership which will never be the same as that of traditional publishers, where most book buyers don’t even think about the publisher when scanning bookstore shelves. For the Plympton business model to work, she says, readers actually do have to pay attention to the fact that it’s a Plympton title in the “vast, undifferentiated sea of e-books.”

Lee is experimenting with marketing and trying to find the best fit for Plympton’s titles. For example, she calls Goodreads an “amazing and vibrant community.” Though she notes that the self-serve advertising system leaves room for improvement, she speaks highly of the book giveaways, pointing out that 700 people signed up for one of 15 physical copies of The Many Lives of Lilith Lane.

Another way to advertise, Lee says, is to develop a direct relationship with readers, either by having a destination site for them to return to regularly, such as a blog, or by connecting via e-mail, Twitter and Facebook (e.g. facebook.com/TheManyLivesOfLilithLane and facebook.com/hackermomseries).

Lee has a few other ideas for marketing e-books — something which, in a Seattle Times op-ed, she calls “an amazingly hard nut to crack.” For one, she says that it’s helpful to have a body of cohesive work such that each new release introduces people to that entire body. Additionally, pulse pricing or hosting giveaways, especially for backlist titles, seems to have an impact on the body of work overall. Lee adds that since the marginal cost of digital volumes is low, this might be effective. She also mentions forming partnerships with independent bookstores using displays with e-book gift cards—something similar to what Enthrill Books in Canada or eLibros in Colombia have done.

Love explains that although she and Lee are very conscious of selling books, they are trying to decide what to take on independent of marketing concerns, at least initially.

“I think that’s something damaging happening in the publishing world,” says Love, “that the idea of how you market something comes before the idea of how good it is. And you decide whether to buy it or not based on whether it’s marketable. That seems perverse to me somehow. So we have not been doing things that way.”

Love admits that a big challenge for her, personally, has been trying to balance artistic ideals with the realities of publishing as a business. While her first concern may be “about the beauty of the work and that’s it,” she has learned quickly that the need to sustain a bookselling business requires factoring in publishing and marketing considerations from which she would rather distance herself.

As they work on their forthcoming titles, the co-founders, who have their own personal projects in development—Lee is working on a book about the struggles of being overly connected in the digital age (eg, texting, IM, e-mail); Love is working on her second novel, about how historians and politicians in the present day contort the history of a failed slave uprising in early 19th century Virginia — continue to experiment with what both the e-book platforms and their own website user experience will look like.

“It’s a lot of experimentation right now,” says Love, “as we build our community and as we continue to publish what I think is really great fiction.”

Eventually, Love shares, once they’re on solid footing, they will feel more flexibility to branch out and consider looking into other genres like memoir and true crime dramas, both of which would work as serials. For now, though, they’re focused on building an audience as they develop their voice and fiction list.

“If we can figure out how to really get the reader feedback in a robust way, and the serials have been written as they come out, then we’ll have really hit that sweet spot and readers can actually determine how the serial proceeds,” says Love. “And that is something that would be really cool. I hope we’ll get there.”