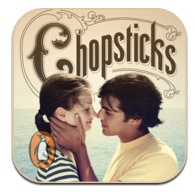 MediaBistro reports that the UK’s App Magazine has named the digital novel Chopsticks, by Jessica Anthony and Rodrigo Corral, as its App of the Year. “Musical notes reveal treasured mementos and stolen secrets as Glory loses herself in Frank’s paintings and drawings. Links bring the music of their shared mix CDs to reality. Vibrant videos play the shows and clips they watch together and breathe still photos to life. Scrapbook images move as the text flows from Spanish to English. Their late-night IM conversations whisper, blinking down the screen. Frank becomes Glory’s connection to the world — and her escape from reality.”