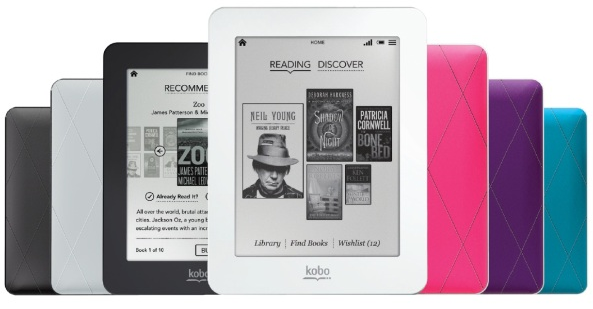 On Thursday morning Kobo announced four new e-reading devices: the Kobo Glo, Kobo Mini, Kobo Touch and the Kobo Arc, a 7” Android tablet. As is increasingly customary with Kobo, which likes to link its announcements with those of larger companies, the news came just hours before Amazon unveiled the next generation of its e-readers: a revamped Kindle, Kindle Paperwhite and Kindle Fire HD. The new Kobo line starts at $79.99 with the 5” Kobo Mini. An updated Kobo Touch is now available at a $99.99 price point, while the Wifi-enabled Kobo Glo will have a 6” E-Ink display and be available at $129.99. The Android 4.0-running Kobo Arc, complete with 7” HD display and high-resolution camera, will come in 8 gigabyte and 16 gigabyte models at $199.99 and $249.99 respectively. The Kobo Arc will be rolled out sometime in November, while the Kobo Mini and Kobo Glo will be available to consumers on October 1.

Throughout the fall Amazon will also roll out the Kindle Fire HD line, which comes in 7”, 8.9” and 8.9” + 4G models. The 8.9” versions will launch on November 20, while the 7” Kindle Fire HD will begin shipping on September 14. They feature new HD displays, Wifi, Dolby Digital audio, front-facing cameras and a host of new Amazon services. Kindle Fire HD line ranges in price from $199 for the 7” model to $499 and above for the 8.9” 4G model.

While Amazon is certainly the more dominant player in the U.S., Kobo is the #1 e-reader in Canada and has been faster to roll out its services abroad, particularly in Japan (home to its parent company Rakuten). It remains to be seen if Kobo can now finally compete for significant market share in the U.S. as a result of its recent partnership with the American Booksellers Association, or if its domain will continue to be overseas. Amazon, meanwhile, seeks to challenge Apple, Google, Barnes & Noble and Kobo, in the U.S. as well as abroad.