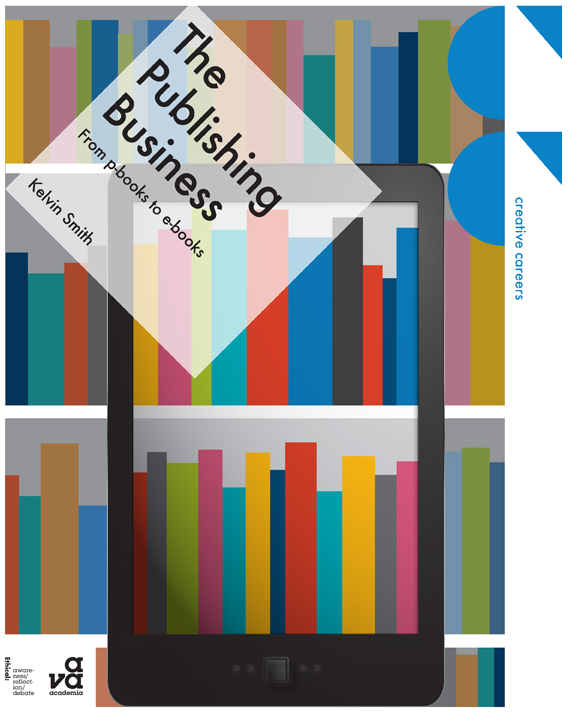 “The perceived speed of digital developments might have made us all lose perspective about the publishing business.” Writing a book about publishing in a time of great change in the book world is a risky business, but I did it anyway, and the result, The Publishing Business: From p-books to e-books was published late last month by AVA in the UK. This book is written for people who are beginning a career in publishing, students on publishing courses and anyone else who wants to learn about the business.

Readers of Publishing Perspectives and the other daily and weekly blogs and newsletters that cover publishing today will be quite aware that each day brings new developments in publishing and the book supply chain, technological developments that affect the way publishers develop and produce publications, and shifts in the power relationships between authors, agents, publishers, booksellers, media companies, software developers and communications giants.

Writing a book about publishing while these changes are going on seems like trying to hit a very erratically moving market, looking to strike the right note and make sure all the bases of publishing are well covered, and give the readers what they need to make sense of the rapidly changing publishing landscape. The experience of the past year has made me think that the perceived speed of digital developments might have made us all lose perspective about the publishing business. The tone in the publishing blogosphere is frequently hysterical about this or that tech development, legal battle, industry sector realignment, IP conflict, financial or commercial brouhaha, and the overall impression when you read enough of this stuff, is of an industry, a profession even, in a blue funk. Conference upon conference seems to address the same issues, and attract a relatively small group of people apparently paid just to think about the future of publishing. They race from conference venue to conference venue, creating and dominating the debate, and why not? They are paid to do just that.

Perhaps it’s time for us to pause, take a deep breath and reaffirm, as I have tried to do in the book, some things that might be constants to publishing. Could it be that the daily avalanche of blogs, tweets and conference presentations may be a smokescreen that hides the fact that publishers, booksellers, authors and readers have lost touch with what makes publishing an important part of our culture and society?

In the 12-month period until I returned the final set of proofs to the publisher, I read more stuff on publishing than I care to remember. It was a challenge to cover the many elements that make up modern publishing practice, to make a judgment on which new developments were likely to have lasting effects on the industry, and to do this across editorial, production, marketing, distribution and finance in a variety of specialist areas of publishing. My job, it seemed to me, was to see through the panic and excessive exuberance and to get down to fundamentals, things that remain constant in the central functions of publishing (editorial, design, production, sales and marketing).

But I wanted the book to do more than provide a wealth of information, illustrations and examples of publishing processes. I wanted to make sure that readers looked at how changes in the publishing world were related to social and personal behavior and to the public space in which the book in all its forms affects our lives. I wanted to convey to the readers, those just entering or considering entering the profession, an optimism and conviction that there is something particularly rewarding about working with books. Readers will judge for themselves if I have been successful.

In the process of producing the book, attempting to hit this moving target, the year brought home to me a number of additional things about publishing today and the debate about the future of publishing. I’ll share just three of these:

Firstly, as I read my daily diet of expert opinion and industry comment, I realized that the debate about the future of publishing is mostly articulated in technological terms, often seeming to be hypnotized by the whiz kids of the hi-tech super-corporations and self-promoting IT start-ups. Many publishing gurus appear bedazzled by the denizens of the global wire-frame mesh that is being created by digital. A few venerable old crones, and some younger wise heads, keep a critical eye on the new orthodoxies about content, curation and digital platforms, and remind us that the future of publishing can benefit by retaining some core publishing values.  They showed that integrity involves getting a better grasp of the history of publishing, an understanding of why publishing has been sustained by certain fundamental skills, values and attributes. Wouldn’t it be nice if more publishers were asking and answering questions about what publishing is for — and reasserting that publishing purpose is as important as publishing process?

Secondly, as my goal has been to make the text, charts, illustrations, case studies and examples in the book as relevant as possible throughout the world, and in particular to make sure that both British and US readers find the book both accessible and useful, I have had to consider how to present the material in a way that would achieve this. I like to think I have an international sensibility and have worked with books in various parts of the world, but the internationalisation of content, terminology and style all proved challenging. As I steered a path between the global and the local, it became clear that the negotiation between these points is something that books can do particularly well, and web-based versioning often does badly. The way in which publishing reconciles its local anchorage with its global outreach is an important thing for publishers to keep in mind as they develop their businesses in the twenty-first century.

Thirdly, and this comes from reading many press reports, articles and interviews from around the world, it seems that many publishing people have lost the belief that they are doing something worthwhile. I don’t know why this is so, but perhaps much of mainstream publishing has not done itself a favour by being seduced by popular culture’s attraction to celebrity over substance. Surely it’s time to pull ourselves together.

That said, there are good signs that publishing is belatedly waking up to its responsibilities to protect freedom of expression, defend universal access to knowledge and promote more equitable global economic and environmental development, and those of us who teach publishing students are frequently inspired by their conviction that publishing can be a force for good. Looking at these young people, perhaps we need have no fears, but I think it’s time for publishing to act its age, to lead rather than follow, and reassert a belief in the positive influence it can have on individual lives, societies and political institutions.

No one knows what publishing will be like by 2050, but it will still be there in some form. What it looks like and how it contributes to the human experience will largely depend on the people who are now just starting their careers in publishing.

These are the last words I wrote for The Publishing Business, and I hope in some small way I’ve helped those publishers of the future on their way.

Kelvin Smith is a regular contributor to Publishing Perspectives about book fairs in Africa and Sweden, translation and other topics. Since finishing The Publishing Business: From p-books to e-books he has been working on a short text called The Point of Publishing. This serious but somewhat whimsical text is made up of ninety single-page parts. Recognizing that it is unlikely to attract a commercial publisher, he is reconciled to the fact that this work may end up being self-published as an e-book or POD, which, as we all know, will still mean it is part of the publishing business.

DISCUSS: Fill in Our Mad Lib About the Future of Publishing