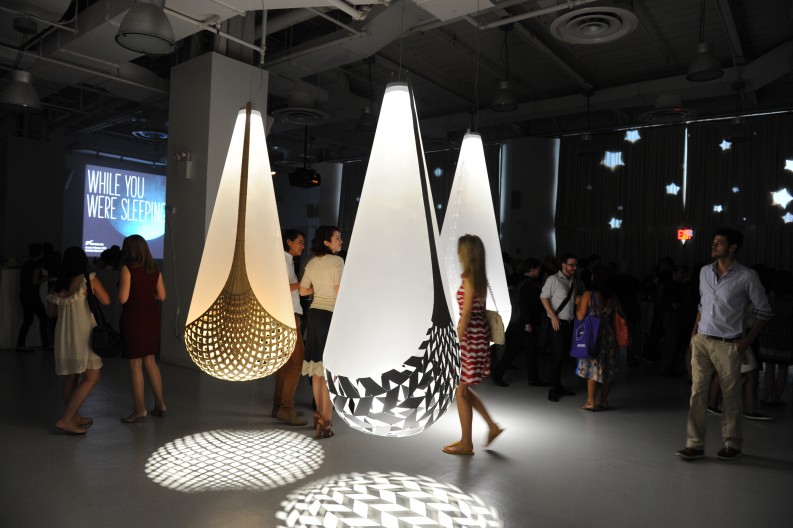 “In a world of flickering imagery and action replays, a book is tangible, lasting, and potentially life-changing”

Ki te marae, tēnā koe
I want for one moment to make our undiscovered country leap into the eyes of the Old World
It is your job, this. To show others who we are* The theme for New Zealand’s campaign is “While You Were Sleeping,” to highlight the time difference and play on their geographic position. In accordance with this theme, the space was transformed by the projection of stars onto the curtains, and David Trubridge’s work “The Three Baskets of Knowledge.” The artist’s creation was hung solely for the evening’s occasion. The harmony of light, shadow and physical forms that seemed weightless fascinated many, and, in addition, served as an example of the art work that will be displayed at the New Zealand Pavilion at the Book Fair in October. Jane Vesty, CEO of SweeneyVesty, an international public relations consultancy, addressed the audience to discuss the importance of sharing New Zealand culture with the rest of the world and why this selection for the Guest of Honour program is so essential. Vesty spoke about her own connections to New Zealand culture and the Frankfurt Book Fair, from her work with the New Zealand Booksellers Association to taking Lovemarks by Kevin Roberts, Worldwide CEO of Saatchi & Saatchi, to Frankfurt in search of (and successfully winning) a publisher. Describing the rich culture of New Zealand, Vesty told guests the country was the most tattooed in the world (Maori tell stories through their traditional tattooes) and highlighted the country’s dedication to their past as well as their future.

Vesty emphasized both the value of books,“In a world of flickering imagery and action replays, a book is tangible, lasting, and potentially life-changing,”and the importance of New Zealand’s cultural exports, “It is critical for New Zealand’s economic and cultural sustainability to be producing and exporting high quality content, experiences and values”.

Vesty showed images of what the New Zealand Pavilion at Frankfurt is set to look like and highlighted several writers—Emily Perkins, Paul Cleave, Alan Duff, among others—to be featured there. While some may have come for the New Zealand wine or to speculate about the Hobbit Cosplay they might see at this year’s Fair, Jane Vesty’s presentation, following heartfelt welcome speeches by Jane Sutherland of Saatchi & Saatchi and our own Erin Cox made an impact on the attendees. One editor from Penguin reported that the event made her “really interested in New Zealand writers.” With copies of New Zealand writer Emily Perkins’ new novel, The Forrests, published by Bloomsbury USA available, those interested were able to begin enjoying New Zealand’s literary exports that very evening.

In the end, all guests were filled with enthusiasm about New Zealand’s part in the Book Fair; the skilled listener, however, could still differentiate between two groups of guests: those who were thrilled about flying to the Book Fair in the fall, and those who regretted not being able to attend.

*These lines are from the video that New Zealand produced as part of their Guest of Honour program featuring quotes from New Zealand writers combined with Maori greetings and images. These words are: a traditional Maori welcome; by Katherine Mansfield; by Patricia Grace.