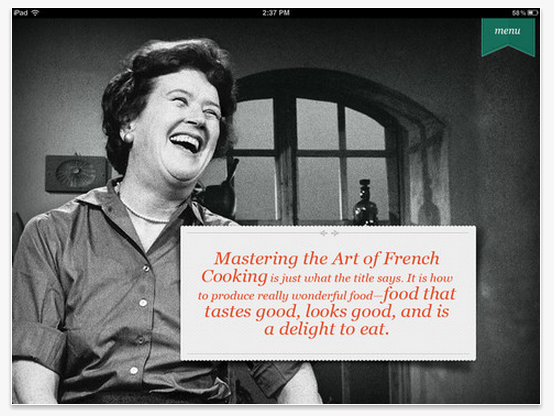 “The writer or editor should be thinking of digital projects like video and audio early on.”

To celebrate the legendary cookbook author Julia Child’s 100th birthday tomorrow on August 15th, Knopf Doubleday has launched her own iPad app, based on Child’s classic cookbook Mastering the Art of French Cooking. The new app will cement Child’s reputation firmly in the 21st century. “Our decision to create the Julia Child app was based on the fact that she’s an icon,” said Knopf Doubleday’s digital director Jeffrey Yamaguchi of Child, who died in 2004. “It is important that Julia Child keeps evolving with her fan base.” A screenshot of the Mastering the Art of French Cooking app

Yamaguchi had a secret weapon in creating the Julia Child app. Child’s longtime editor, Judith Jones, who published Mastering the Art of French Cooking in 1961, still works at Knopf. The book had already been rejected by Houghton Mifflin when Jones took the manuscript and helped reshape it, making it a surprise bestseller and Julia Child into a famous chef and household name.

“Judith Jones helped select the recipes and made sure that they were presented properly in the app,” said Yamaguchi from his spartan Knopf office overlooking Midtown Manhattan. “She made sure that Julia Child’s voice came across.”

Released on July 17th, the centerpieces of the new app are 32 recipes from Mastering and 30 related videos taken from Child’s “How to Cook” series from 1985, where she shows how to make everything from vichyssoise to bifteck sauté a buerre. The app also includes rare photos, an explanation of French ingredients, and an essay on the history of Mastering by Judith Jones.

“An app is a pretty serious investment,” said Yamaguchi. “You have to put something in the app that people will want on their device.” Yamaguchi has been creating digital projects for Knopf Doubleday for the last four years. His team has been doing some very innovative work. A recent success was a bestselling e-short called Beyond Outrage last April by Robert Reich, the Berkeley professor and Secretary of Labor under President Clinton. The book made the number three spot on the New York Times e-book bestseller list and spawned a gleeful feud between Reich and Fox’s Bill O’Reilly.

The seed for Reich’s bestseller was planted at a meeting of Knopf Doubleday editors. “We had a meeting to discuss emerging platforms like enhanced e-books, e-shorts and apps,” said Yamaguchi. Jonathan Segal, Reich’s longtime editor was there. “Jonathan said ‘I want to do one of these e-shorts.’ He reached out to Reich.”

Reich put together a 92-page e-short on political stagnation in America, how the economy is rigged in favor of the rich and what the average American can do to combat these problems. The e-short includes brief videos by the telegenic Reich, explaining the major themes of the book. Several of the videos have been spun off for promotion on YouTube. The 66-year-old Reich has embraced the new technologies and showed his own promotional savvy. “Robert Reich totally understood that we were going to have a marketing plan,” said Yamaguchi. “Reich was already engaged in the social media…he’s on Facebook and Twitter, and his blog is on Tumblr. “Through this project,” said Yamaguchi, “we wanted to take his engagement to the next level.”

Reich’s Knopf publicist got him on The Daily Show with Jon Stewart for the new e-short. Beyond Outrage struck promotional gold when conservative talk show host O’Reilly attacked Reich on his own show, calling him “a Commie.” Reich responded by going on Twitter, saying, “Bill, you called me a Commie…Debate me man to man. Put me on your show.” Yamaguchi and his team jumped into action, using image-based posts with Reich challenging O’Reilly. On Tumblr, things took off. Reich’s blog posts received more than 500 reblogs, likes and notes from readers. The success of the Beyond Outrage e-short means that it will be turned into a traditional paperback with new material from Reich, to be published by Vintage on September 4th.

Yamaguchi’s own road to digital marketing came from his involvement in the 1990s zine scene. Going to college at UC San Diego, Yamaguchi was involved with DIY publishing and had a successful zine called “Working for the Man,” which covered comic and horrifying employment stories. He later self-published Working for the Man as a book.

“All that work I was doing in the zine world taught me how to pitch projects and how to connect with audiences,” said Yamaguchi. “When a new social media like Instagram pops up and I start playing with it, I harken back to the days when I was sending my zine out to be reviewed. I learned how to connect with people and to forge a community. I go back to this language today when I am working with an author on how to create their web presence.”

Sometimes an author will bring Yamaguchi an unexpected promotional gift. Last winter, Ben Marcus, the Columbia University writing professor and well-connected member of the literati, was on the cusp of publishing his novel The Flame Alphabet. Marcus had worked with a filmmaker friend to create a two-minute animated film on the novel, where children torture and kill their parents with language.

“When Ben told me about the project, I knew it was going to be a great asset for promoting the book,” said Yamaguchi. “Ben gets a lot of attention for his writing. We got the video and made it a big part of our marketing plan. Boing Boing posted it. Places like Wired, which might not necessarily write about Ben, wrote about him because of the video, which got 30,000 hits. Here was this amazing asset. It wasn’t a trailer. It was an artistic piece.”

Last November, Knopf put out My Song, Harry Belafonte’s long-awaited memoir. Yamaguchi’s team was given the task of making an enhanced e-book. “We decided to go to interview him for a series of videos,” said Yamaguchi. “Seeing his gestures, his voice and his laugh, seeing his eyes when he discussed a particular memory in the book, was mesmerizing.

“With enhanced e-books, you have to ask if this person good on camera and is this person compelling? With Harry Belafonte, there was no question.”

A Word of Advice: Plan Ahead

Yamaguchi said that digital promotion for books must be planned out way before the pub date. “Being in the digital space, you need to think about things ahead of time,” he said. “The writer or editor should be thinking of digital projects like video and audio early on.” Throwing on a bland book trailer or a video interview with the author at pub date is not enough.

At Knopf, the best strokes of promotional creativity are often done in-house. Yamaguchi pointed to the work done by his digital team member Shannon Donnelly to promote Charles Yu’s new short-story collection Sorry Please Thank You. “Shannon created a clever video that has a script and conveys a story,” he said. The two-minute video is a faux commercial, where anxious New Yorkers can shift their stress and abuse to telemarketers so the customer can have a great day. It is a hysterical combination parody of an infomercial and a TV drug pitch, with a long list of horrific side effects.

“The video makes you curious,” said Yamaguchi. “Viewers ask, ‘What is this?’ It might be something they want to share.”

For Yamaguchi, ongoing digital projects often involve tweaking. The highly motivated author Robert Reich was one such example. “When Reich was in New York recently,” said Yamaguchi, “myself and Mary Buckley, one of the Knopf marketers, sat down with him and spent an hour with him explaining how you respond to your audience on Twitter, so you are acknowledging their tweets and comments. He left the office, and almost immediately, you could see he was using our suggestions on his Twitter page.

“That’s what you want,” said Yamaguchi, “an author with an open mind and the willingness to do the work.”

Dylan Foley is a freelance writer in Brooklyn, N.Y. He can be reached at dylanfoley@aol.com.

DISCUSS: The Important Ps in Publishing