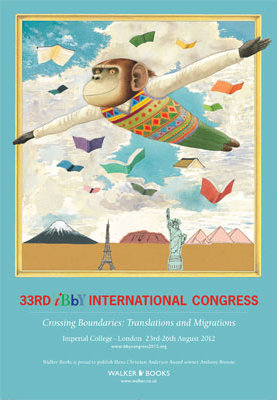 It’s being billed as “probably the greatest gathering of children’s books enthusiasts in the world.”  From August 23-26, London’s Imperial College will be welcoming the 33rd World Congress of the International Board on Books for Young People (IBBY), which will feature delegates from around the world talking about children’s book in an age of globalization and migration, while also serving as a showcase for modern British children’s literature and British reading initiatives. Also taking place in association with the Congress will be Wonderlands, a festival of international writing for children at the British Library.  It will feature many of the same authors and illustrators who will be at the Congress, and will be open to families on the weekend of August 24-26.

The theme of this year’s Congress is Crossing Boundaries: Translations and Migrations (download PDF flyer here), which will highlight both the international diversity of children’s books and the way that children’s books act as bridges between cultures.  Delegates will have over a hundred discussion forums to choose from, with speakers from more than forty countries and subjects as diverse as comic super heroes in France and the U.S.A.; the use of digital technology to share stories across national boundaries; and developing a culture of literacy in a village with no books.

Held in partnership with Booktrust and IBBY, the Wonderlands Festival of International Writing for Children is open to the public. Some of the international authors and illustrators visiting the Congress, including the renowned Australian illustrator Shaun Tan, and Peter Sis, this year’s winner of the Hans Christian Anderson Award for Illustration, will be speaking directly with children and their families, alongside such British favorites as Michael Morpurgo, Julia Donaldson, Michael and Anthony Browne.

Patrons of the Congress include children’s author Frank Cotrell Boyce who scripted the Olympics Opening Ceremony, and the former UK Children’s Laureate and author of War Horse, Michael Morpurgo