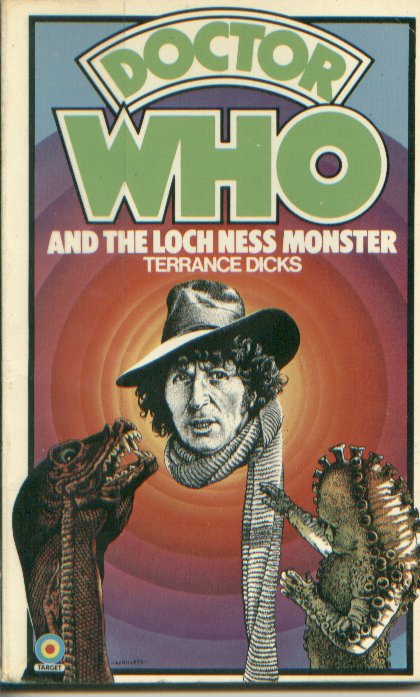 “Doctor Who is pure escapist hokum, which is no small thing to be.”

It’s 1976. The United Kingdom has three TV channels. Home VCRs won’t be available in stores for years and as for DVDs, cable, satellite TV and all the rest…that stuff is science fiction.

Although, saying that, science fiction to young British kids in 1976 really means one thing – Doctor Who (at least until Star Wars screeches into sight the following year). The exploits of the maverick, anarchic Time Lord as he battles monstrous foes across the universe fill just 25 minutes of the weekly TV schedules…but they fill the young Steve Cole’s head with an entire misspent childhood’s worth of thrills, chills and wonder.

And what is the only way to extend the reach of those visceral thrills?

I vividly remember being five years old and standing in a bookstore with Doctor Who and the Loch Ness Monster clutched in my hands. My mother made me read the first page aloud to be sure I was ready for a chapter book with a hefty 40p price tag (about 60 American cents — as much as about four comic books back then!). There was a lot riding on my performance, but I pulled it off, making up the words I couldn’t read (well, it was science-fiction — to my mom, pretty much a foreign language anyway). Back then, the books were the only way to re-acquaint yourself with past adventures, both those you remembered fondly and those that aired long before you were born (the show first went out in 1963, its premiere delayed by news coverage of JFK’s assassination). You couldn’t go back to the source material, but you could return again and again to the Doctor’s adventures in print.

In some ways, the books became more important to me than the TV show. It wasn’t just that the special effects were so much better when conjured by words and imagination alone. The books offered a kind of comforting permanence, there in scores to shore up the uncertainties of childhood. There were four different Doctor Whos and endless alien races, and yet the novelisations possessed a reassuring consistency of style: depending on which body he wore, the Doctor might have “a shock of white hair” or “a tangle of unruly curls,” or a “pleasant, open face” — but he always had “capacious pockets” and a ship that made a “wheezing, groaning sound” upon take-off and landing. This familiarity lent young readers confidence as they read their way through the Doctor’s literary universe — and gave young writers a whole heap of ways to impress their English teachers.

A man called Terrance Dicks wrote a lot of these books (The Loch Ness Monster included), and while he was not the flashiest writer in town, he always translated screen-fare into prose with colour, verve and economy. He gave a talk at my local library in 1984, and of course I was there in the front row. “Doctor Who is pure escapist hokum,” he told his audience, “which is no small thing to be.”

That talk crystallized something in me; aged twelve, I knew I wanted to be a book-writer like him. But I could never have imagined how our paths were to cross fifteen years later… Who in print carried on through the 1980s until there were no more TV shows to novelize. Then new adventures were the order of the day, aimed at the kidults who’d grown up with the novelizations. And in 1997 I found myself at BBC Worldwide as editor of the Doctor Who book range.

The first author I worked with?

Terrance Dicks. The man who’d helped me learn to read and inspired me to write. Through a trick of time and space there we were with the ageless Doctor still at our backs.

The Time Lord returned to TV in spectacular style in 2005, thoroughly modernized and reinvigorated, ready to inspire a whole new generation. Three new novels were published to tie in with the first broadcasts, and all became bestsellers. One of them was written by me.

If only the five-year-old Steve Cole, tentatively reading his first Doctor Who book, could’ve known that one day he’d be writing them too…or that they’d help inspire him to invent several book series of his own. Luckily, that younger me is still safely tucked away inside, and I can let you know he’s thrilled to bits (pretty much constantly, actually).

As is the forty-year-old Steve Cole now in 2012, as Doctor Who and the Loch Ness Monster is republished alongside eleven other vintage Who books for the Time Lord’s younger fans to discover, and for his older fans to enjoy all over again — while wondering warmly whatever happened to their long-lost originals.

Perhaps it’s kind of inevitable; in a show about time-travel, nostalgia can never go out of style.

Steve Cole is the author of bestselling UK children’s book series Astrosaurs, Cows In Action, The Slime Squad and many more. Work published in the USA includes The Wereling (Razorbill), Thieves Like Us (Bloomsbury), Z. Rex (a New York Public Library “100 Titles for Reading and Sharing” selection), Z. Raptor and the forthcoming Z. Apocalypse from Philomel, published October 11, 2012.

DISCUSS: What Childhood Books Do You Still Cherish as an Adult?