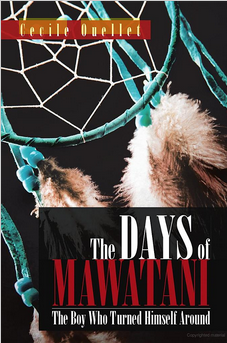 The Breaks by Alvis R. Anderson: When a grown man and his mother are shot execution-style in an isolated Montana ranch, it’s up to gray-haired, Lutheran pastor Sicily Anderson to puzzle out the frightening goings-on in her tiny community, all while writing sermons and organizing church suppers. Feisty and curious in all the ways that can lead somebody into trouble, Pastor Sic is an original and thoroughly enjoyable crime-cracker. Read review.

Lucy and CeCee’s How to Survive (and Thrive) in Middle School by Kimberly Dana: Styled as a handbook written by two best friends, and including a plot revealed through passed notes and diary entries (wherein Lucy and CeCee wrangle with boys, grades, cyber-bullying and more), this well-designed book packs useful information into a fun, frothy read. Middle-school teacher Dana, who has won awards for her writing, knows her audience well and has pitched her book to them perfectly. Read review.

The Days of Mawatani: The Boy Who Turned Himself Around by Cecille Ouellet: With an intense sense of history, author Ouellet tells the story of an early 19th century Oglala Lakota boy. After an accident leaves Mawantani permanently lame, the boy struggles with self-pity, until a vision quest allows him to gain a measure of wisdom and a sense of his place among his people. Mawatani is a thoroughly realistic character with whom young readers will easily identify. Highly recommended as a supplement to a school history curriculum. Read review.

The Agatha Principle and Other Mystery Stories by Elizabeth Elwood: Featuring an enjoyable assortment of whodunits, this story collection revolves around the entertaining Beary family of Vancouver, British Columbia, whose members include a singer/actress; a Royal Canadian Mounted Police detective inspector; a lawyer couple, and an overbearing, yet well-meaning mother and spirited, long-suffering father. Written in lively, succinct prose, the stories prove that Elwood is a gifted mystery writer at the top of her game. Read review.

If Two Are Dead by Jonathan Carriel: The third in an historical mystery series, Dead is set in 1762 and features Thomas Dordrecht, a young employee of a New York shipping firm. When Dordrecht’s perfectly healthy boss turns up dead, he starts poking around, only to be shocked by what he finds. Carriel has a master’s degree in history, which shows in his impeccable research of the time period. With assured, precise writing and dialogue fitting the era, the story takes readers on unexpected twists and turns. Read review.

Laura Denfer by Anne-Marie Bernard: This impressively maze-like and adeptly narrated espionage thriller is enhanced by the utterly heartrending character of Laura Denfer. At the story’s start, Denfer, 36, has been in a North Korean prison for two years, tortured at the hands of her captors. Finally freed, she now finds that numerous assassins are trying to kill her and alleged allies are seeking to understand her role in a volatile political situation that could lead to another world war. Intelligent, crisp and unapologetic, Bernard’s writing makes for an intense and deeply satisfying read. Read review.

Call Me Sonja by Arthur E. Hedstrom: Fans of turn-of-the-century romance will love this story about a young boy from a wealthy American family who meets a Russian princess while vacationing in France. Will their differences and social stations keep them apart? With effective dialogue and vivid characterizations, Hedstrom does a masterful job of weaving together the answer to that question. Read review.

Planting Love: A Tale of Love and Growing by Connie Hunt; illustrated by Charlo Nocete: A beautiful, spare story about love’s power to heal, Planting Love follows Freddie the Ficus as he leaves the nursery at the Rent-a-Plant Company and is dropped off at a cold, uncaring household. Freddie soon begins to fail — until finally a young boy rescues the plant with his love. Poetic, tender, delicate and thoughtful, this slim volume could be read aloud to a child, or given as a gift to an adult processing a loss. Read review.

The Sea and the Hills: The Life of Hussain Najadi by Hussain Najadi: This elegantly written memoir by a Bahraini investment banker who pioneered many business links between the Middle East, Southeast Asia and Europe, is a classic tale of redemption, chronicling the rise of a poor boy to power and influence. Suffused with optimism, this memoir provides rare insight into the drama of the Middle East. Read review.

People Training for Good Dogs: What Breeders Don’t Tell You and Trainers Don’t Teach by Melissa Berryman: Good dog trainers know that they are really training the dogs’ owners. And that’s what former Animal Officer Berryman aims to do in this book, which offers valuable information about setting clear boundaries and establishing rules with dogs. This is a fine choice for any current or future dog owners who want to affect a healthy, safe relationship between themselves and their pets. Read review

The Reagan Revolution and the Developing Countries (1980-1990): A Seminal Decade for Predicting the World Economic Future by Lawrence Feiner and Richard Melson: Both former principals of the Cambridge Forecast Group, the authors have written a sharp challenge to prevailing economic thought, arguing that despite the chaos that seems to have enveloped the world economy since the end of the Cold War, the direction and development of world economic history is, in fact, quite predictable. Professors of economics and professional economists will find this book both appealing and important. Read review.