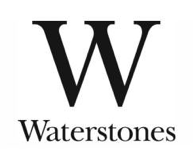 Waterstones’ partnership with Amazon to sell e-books took many by surprise. Some see it as a deranged self-defeating deal with the Devil while others view it as a brilliant near-term compromise. What do you think?