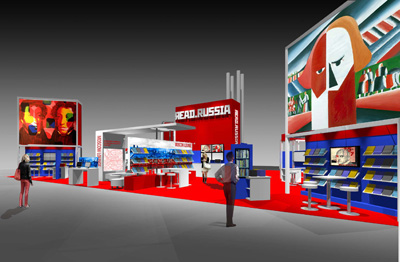 “For the whole Russian book market the digital share is just 0.25%.”

Vladimir Kharitonov began his career in publishing at Ural University Press, before transitioning to Ultra.Culture an independent house dedicated to “awakening thoughts and proposing alternatives” which occasionally ran afoul of the Russian courts — one of the firm’s books was banned and “destroyed by bulldozers.” At AST he was a non-fiction editor, during a period when it was the largest publishing house in Russia. Today he serves as Executive Director of the Russian Web-publishers Association– an alliance of publishers, librarians and others concerned about the situation in the Russian book industry which was established in 2010 to publicly campaign for the liberalization of Russian copyright law, and to advise digital content publishers. Prior to his appearance at the BookExpo America next week, we spoke to him about issues relating to Russia’s digital future- from piracy to distribution and beyond. A mock up of the Read Russia pavilion at BEA.

Although it may seem to outsiders that Russia is a haven for fiendishly resourceful pirates and clever hackers, perfectly adapted to the digital world, in the world of legitimate business the same yearning for a prelapsarian paper based past that has often paralyzed the American book trade has also afflicted Russian publishers.

“Russian publishers until recently were not different from their Western colleagues,” says Kharitonov “…as the chief editor of one big Russian publisher said: ‘I feel like a polar bear on a iceberg. Floating to the south.” To be a digital publisher is to change your mind about what a book is, what the role of publishers is, and what constitutes a good business model.’

Demand for Digital Books is Growing in Russia

And yet, there is extremely strong demand for e-books in Russia:

“Now nearly 22 to 23 million people in Russia more or less regularly read digital books with e-ink readers, tft-reader and tablets, while even more people use smartphones and laptops. But this giant demand is not met with suitable offer from publishers.”

Popular platforms include e-ink readers manufactured by PocketBook and Sony, although since 2011 more and more people have been purchasing tft-readers. “But the main platform,” says Kharitonov “According to the studies of sociologists is the PC and mobile. Among subscribers of Bookmate.com, for example, the share of mobile users is nearly 75%. The share of tablets is small now but I guess it will arise coming years.”

But what about piracy? This is a huge problem, says Kharyitonov, but he advocates for a more supple approach in thinking about it.

“Which came first — the chicken or the egg? Piracy or backlog of demand? From a historical point of view, the pirate came first- not only in Russia, but in the USA too. The cause is simple: technology always develops ahead of the content industry, and technology generates customer demand. At the early stage unfortunately this demand cannot be satisfied by the industry. It usually reacts too slowly. But not pirates. Moreover, as for Russia, one of the e-books retailers was established on the base of four unofficial online libraries!”

Indeed, he says, at times the industry, having responded inadequately to the pace of changeis at least partially to blame for its woes:

“Even now there are publishers who talk about digital books like this — ‘It is not serious,’ ‘it’s just fashion,’ ‘tablets are for games.’ There are also problems in the legal sphere: in Russian law the idea of digital rights as a different type of rights emerged recently. When publishing digital books publishers must renew their agreement with authors to digitize books, and so on. Often publishers are focused on mainstream books, but pirates offer both bestsellers and ‘long tail,’ out-of-print books.”

E-books are Just 0.25% of the Russian Book Market

The result, says Kharitonov is that unauthorized distribution completely outperforms legal channels in the assortment and variety of books on offer. The biggest Russian e-books retailer LitRes offers no more than 50,000 titles of Russian books, while the biggest unofficial library Lib.rus.ec — offers nearly 200,000 titles: “I agree with Tim O’Reilly’s opinion — that book piracy is not dangerous, but an informal form of taxation. Yes, it’s not a very happy situation for publishers but there is no evidence (except intuition) that piracy really affects sales. At least, because sales of digital books in Russia double every year. The total amount was almost $4.5 million in 2011, which is 0.25% of the entire book market. And I guess it will be no less than 5% in 2015.

“To fight piracy by law or police measures has no perspective. A good cure is the mass digitization of books, and finding more convenient means and methods for payment and searching. The best cure would be a project similar to the French law on Digital Exploitation of Unavailable Books.”

Indeed, once (or if) Russian publishers resolve their issues surrounding digitization and piracy a vast market awaits them, not only because of Russia’s population, but because of its historic problems — dating back to Tsarist times–of establishing effective distribution networks. Provincial towns are full of highly educated people who are ill served by poorly stocked bookshops. And those books that do arrive are expensive due to transportation costs.

“Digital publishing can’t solve all problems with book distribution in Russia, but it certainly could help,” says Kharitonov. “There is a strong link between the lack of book shops in a particular region and the number of search queries for “digital books”, in the Far East, Sakhalin, Chukotka, Magadan and so on. In the Russian provinces digital books are the savior of readers. I don’t know statistics for retail companies but the huge share of “cloud” book club Bookmate.com subscribers, for example, is from the provinces (43%), not Moscow or St. Petersburg.”

Likewise, adds Kharitonov, the very existence of e-readers helps arrest the decline in reading that has been ongoing in Russia since the country’s Soviet heyday, when there were very few other forms of entertainment on offer:

“Now there is the Internet, social networks, YouTube, messaging, mp3s, video, and so on. We in fact read more, but we read more posts, articles, and comments–not books. A book as a vessel of condensed thought and knowledge must now compete with Wikipedia and articles on popular blogs. Really, Russians read less: now 35% of adult Russians don’t read books at all. In 1996 only 20% of adult Russians didn’t read books. But digital books can and do reverse this trend: 48% of readers of digital books do not read less, and 42% of them actually read more than before. It’s not very strange: if you’ve bought a book reader or iPad for reading you’ll read more.”

But even as digital books arrest (in some people) the decline in reading, Kharitonov ultimately views the paper book, long term, as a historical artifact approaching obselescence:

“The paper book economy depends on print run. The print run of books in Russia has declined, not only since the recent economic crisis, but over the last ten years. In 2011, the average print run fell to fewer than 5,000 copies. With the dwindling number of book shops (there are approximately 3,000 book shops in Russia now) print runs will continue to decline. The alternative is only digital because of price and distribution.

Approaching it with an Open Mind

“In the short term perspective there has been strong growth — indeed the doubling — of digital book share over the last four years. And those publishers which have a clear policy for digital books now generate more income from e-books than their competitors. For the whole Russian book market the digital share is 0.25%, but for the biggest Russian business book publisher Mann, Ivanov & Ferber it’s 2%, and for the Art Lebedev Studio it’s 5%. Now publishers are beginning to look at digital books with an open mind, and to experiment with different business models. New companies are emerging on this market…Finally, more and more Russian digital books are sold abroad — on Barnes & Noble’s Nook, for example. And this is a good sign because Russian literature is not only for Russia but for Russian speakers in many countries.”

In the 1990s, Russia was awash with Western specialists advising Russians how to adapt their industries to the modern age. But is it possible that after twenty years at the frontier of rapid change, chaos and piracy that Russians may actually have experience from which Western counterparts could learn? Yes, says Kharitonov:

“No DRM or ‘native’ DRM. From the beginning of digital publishing the base principle of distributors who were techies and not publishers was ‘no DRM.’ Real techies know the simple truth: all limitations may be circumvented, and more limitations create less comfort and convenience for readers. Why impose useless limitations if the main goal of marketing is the comfort and ease of consumers? I don’t know any distributor which uses DRM similar to Adobe or Amazon. The only Russian distributor with ‘native’ DRM is Bookmate.com, with its cloud technology quite similar to Skoobe.de, for example. Their subscribers can read the books by web and mobile applications (for iOS, Android, Symbian) with no need to download files directly, but can use it through closed cross-platform synchronisation. Maybe a no-DRM policy is not very useful for publishers, but it’s very good for promoting digital books among potential readers. This idea — of no-DRM — is a hot topic in Western professional circles. And it’s the realistic (and correct) perspective for the digital books industry.”

You can read more on Kharitonov’s blog: http://www.digital-books.ru/