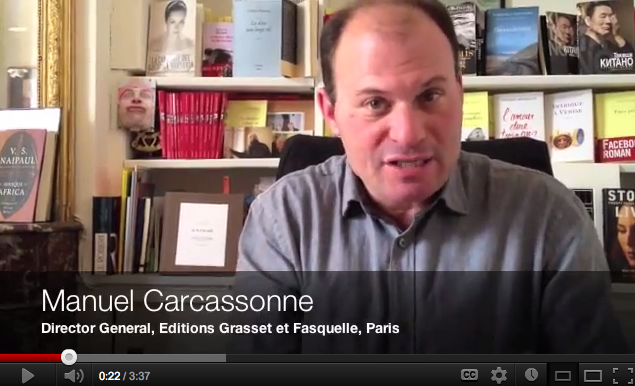 Earlier this month Manuel Carcassonne, director general of French publisher Grasset, spent a week in the United States meeting with publishers, editors, and book critics to get a better sense of how French books and literature are received by readers and media. One of the outstanding questions is why such a limited number of French books are translated into English. Is it because of the lack of interest? Is it because of the quality of the books? Or is it because of pre-existing clichés about French literature: that’s little more than auto fiction and/or quasi-philosophical treatises about the human condition.

That’s not to say that there aren’t serious and very worthy works of French literature that are translated in English – it’s more to say the readers are having a hard time finding them. Much of this has to do with the modest print runs of a small, dedicated crew of publishers who bring them to market.

In an interview with Publishing Perspectives (see above) Carcassonne noted that a book like Irène Némirovsky’s Suite française was a French novel and was very popular. Why couldn’t that success be easily replicated? I pointed out that for many, the book wasn’t identified as explicitly French, but rather as a World War II novel. And this is a genre that always sells.

So tell us, how well does French literature play abroad? Is it hemmed in by preconceived notions? Is there an untapped market for works of history, politics, biography, romance and other genres? (Yes, we know people are interested in French self-help.) If that’s the case, what books do you think would work in the English-language market?