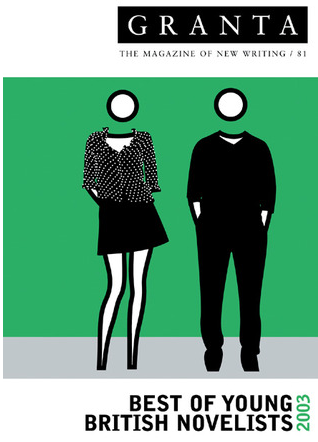 Who doesn’t love a cheat sheet to the best young writers? Granta has always had top notch taste in picking future winners in the literary sweepstakes — and they are at it again. Just announced, they’ve opened submissions for the 4th edition of the list:

More from the Press Release: Amis, Barker, Barnes, Hollinghurst, Ishiguro, Mitchell, Rushdie, Smith, Tremain, Winterson … long before they were household names they were Granta authors. Who will be part of the new generation?

Submissions are now open for the fourth edition of the Best of Young British Novelists list, which will be announced at the London Book Fair on 15 April 2013. Agents and publishers can submit using the guidelines detailed below.

Granta editor John Freeman says: “There’s never been a crystal ball about the literary future quite like this list – but there’s more to it than literary gambling. I think the novel as a form has always told us as much about society as it does about art. What’s next isn’t just news, it brings us the news about how we live.”

Candidates must be under forty as of 18 April 2013, when the issue will be published. They need to either have a book contract for a work of fiction, or one book-length work published, and they need to have a British passport. Agents and publishers may submit as many authors as they like, but please be realistic about the literary quality of the submissions. Each submission must include seven sets of the author’s work-to-date, as well as a text to be considered for the issue itself.

The text to be submitted for the issue itself must be a work of fiction and unpublished anywhere in the world as of 15 May 2013. It can be a short story or an excerpt from either a novel in progress or a novel about to be published. Please do not send this text separately from the author’s supporting book work.

Submissions close on 15 September 2012. Late entries will not be considered.