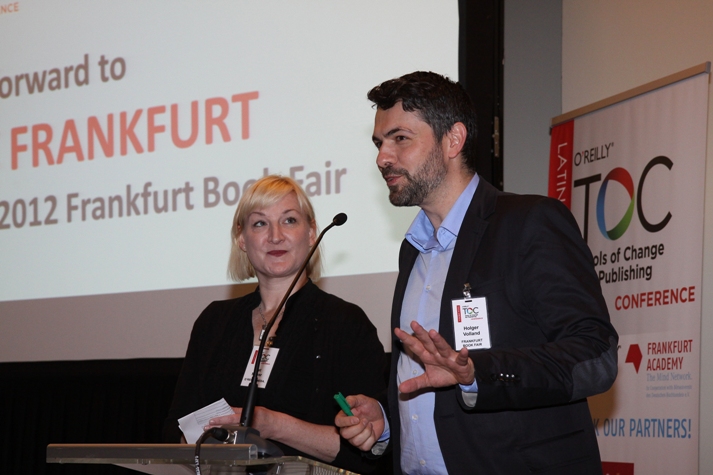 The inaugural Tools of Change Latin America offered insights into metadata, e-book formats, and e-tailing, but missed participants from Spain. BUENOS AIRES: Much-anticipated as it was, the first Tools of Change conference in Latin America fell short of expectations. Local members of the industry failed to communicate the needs of their market, which remains mostly unknown — in part due to Spain’s pre-eminence as an economic force that floods and chokes out any other perspective. Since this was the first TOC conference to be held in what we agree to call the South, the foreign organizers would have profited from more focused directives from Latin America. The main purpose of TOC conferences — to be a harbinger of an unavoidable change in which publishers must be included — was undermined by fact that the Argentine industry as a whole is now involved in a heated discussion with government authorities over the ideal future for local printers.

Liz Castro stood out among the ranks of speakers; her very practical and enlightening half-hour talk, “ePUB in the Wild,” unfolded tricks and tips to deal with the fragmented platforms and inconsistent devices typical throughout the industry. While Laura Dawson — aka Sister Metadata — gave another talk very much-anticipated among the geeks who man publishers’ oars through turbulent waters. Both of us, Laura and myself, failed to address concrete concerns, in part because the very long keynotes that took place during the morning did not leave enough time for a round of questions. Manuel Dávila Galindo, content acquisition manager at Librerías Gandhi — the Mexican bricks-and-mortar equivalent of America’s Barnes & Noble recently turned to e-tailer — would have loved to ask which solutions we proposed for his constant problems with Libranda’s metadata, whose database breaks down too often and looks as if it needs a good fix.

In Galindo’s concern with Libranda, we find another shortcoming of the conference, one beyond organizers’ powers of foresight: the void that Spain’s absence has left in this year’s Fair. For all its peculiarities as a market, digital Spanish-language publishing in Latin America can’t be addressed fully without the Spaniards’ input as partners — at least so long as 70% of the copyrights sit in Madrid and Barcelona, and Latin Americans have to trade with their Spanish colleagues.

George Slowik of Publishers Weekly, and journalist Rüdiger Wischenbart gave long in-depth overviews of American and European global markets. Again, there was nobody to talk about Spain, whose fortunes have such a considerable impact in Latin America despite wind and high waters. Patricia Arancibia, editorial director of international digital content for Barnes & Noble, gave a very welcome talk about the opportunities and challenges of going global in a digital marketplace. But for all her trademark optimism and her warm warnings, the silence surrounding the Spain-issue was deafening by that point in the day.

Cecilia Espósito, an e-book developer with Santillana Argentina, bought her ticket for ToC more than a month ahead of time. She was there especially to listen to Bill McCoy’s keynote. The executive director of the International Digital Publishing Forum (IDPF) lived up to expectations he had created among fans and followers with his keynote speech about the media-rich, connected, interactive future of e-books. But Espósito confessed being a little disappointed with the metadata talk and felt that she would have benefited from a long round of questions and answers with Liz Castro and her first-hand knowledge of EPUB standards. Joe Wikert and Bruno de Carli, founder of Pasta do Professor, presented very interesting business models with subscriptions at their core. But the issue wasn’t discussed in-depth because the audience was generally unaware of the current discussions surrounding the topic that are being held in more developed markets. The audience seemed to be taken by surprise by a subject that is vital to the future of academic and specialized publishing–so much so that no one seemed to be startled by the fact that Pasta do Professor had published 5,000 titles as PDFs exclusively, a format that even Bill McCoy, an early advocate, considers as past its prime and in decline.

Pasta do Professor, a Brazilian venture, has creatively tackled a wide-spread problem in the universities around the world: photocopies of chapters from copyrighted material. “Pasta do professor” literally means “professor’s folder” and it refers to the reading selections that each professor uses in her classes. By selecting the chapters recommended in the curricula and offering them on a subscription basis to students, Carli has solved a problem both for students, who can’t pay for the whole book just to read chunks of it, and for authors and original publishers, whose work is rewarded by the constant flux of royalties.

E-tailing from Brazil, Start-ups in the South

Brazilians made up the bulk of the round table discussion on e-tail moderated by Carlo Carrenho, founder of PublishNews. While Newton Neto of Google eBooks charmed the audience with soccer metaphors and said nothing new about the search giant’s e-book plans in Latin America, Marcelo Gioia from The Copia Brazil caught the interest of many publishers and retailers who see social reading as one of the features of the near future.

Silvio Pestrin Farina, founder of the start-up Fiction City, was the last speaker in the panel discussion moderated by Argentine publisher Octavio Kulesz. As an Internet entrepreneur he had a terrible message for publishers — the logic of the Internet is that all content must be free and you’d better start thinking in terms of traffic to make a living. On the opposite side of the spectrum was Pablo Avelluto, publishing director at Random House Mondadori Latin America, who sent a sobering message about how publishers need to fail on their own terms in the South, an adventure in which he’s heavily engaged.

Surely, we’ll have gotten over our shyness by then and we’ll be ready for the real party.