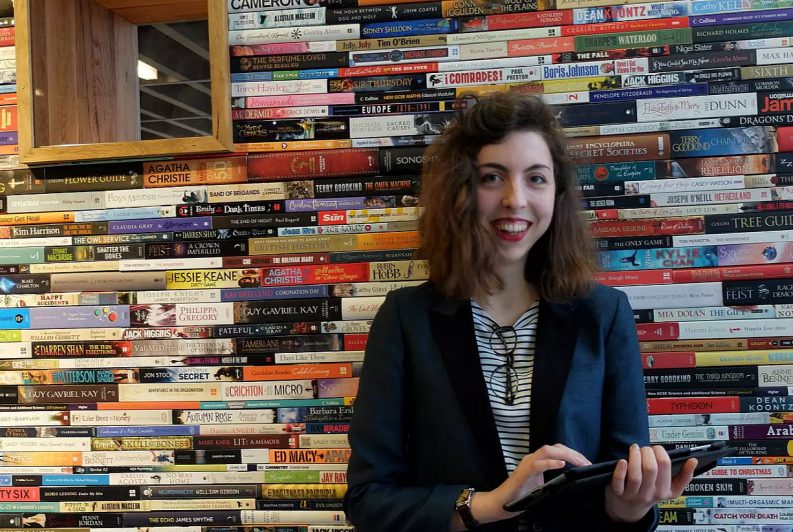 A specialist in challenging ‘assumptions about how things are done,’ Emily Labram knows the digital context of publishing’s potential. The Rising Stars program is a project conceived and run by The Bookseller in association with Frankfurt Book Fair. It recognizes emerging leadership in the UK publishing industry. Publishing Perspectives’ series of interviews with members of the class of 2016 continues today with Emily Labram, who recently joined Emma Barnes’ award-winning team of publishing-tech enablers.—Porter Anderson

Last year a good one for Emily Labram. The Game of Thrones app she managed for HarperCollins—a project she described here for The FutureBook—had 20,000 downloads in its first three weeks and won the FutureBook Award for Best Adult Digital Book. Labram herself was shortlisted for the awards’ Digital Achiever of the Year.

This year may be shaping up to be even better. In making her March move to the role of product manager with Emma Barnes’ Bibliocloud—winner of the 2013 FutureBook Technology Innovation prize—Labram is helping publishers automate tasks that can distract them from their core goals.

Labram, like Barnes (also shortlisted as a Digital Achiever), is passionate about eliminating “admin” chores and putting the customer at the heart of publishing. Self-aware and questioning, she articulates an authoritative view of the industry’s weaknesses.

Publishing Perspectives: How long have you been working in publishing, and what brought you to the book industry?

Emily Labram: It wasn’t zealotry about changing the world—initially, at least.

I emerged from an English degree five years ago, and—with memories of recession still fresh—decided I’d better get started somewhere. With a few work-experience placements under my belt, I felt that publishing was as good a route as any. Of course, having London-based parents made that decision a lot easier, and I want to acknowledge that privilege. It still leaves a funny taste in the mouth.

“We need to raise the bar for entry-level jobs. Empowering new starters in publishing to expect more from their roles is one of my greatest joys.”Emily Labram

EL: Awards are wonderful, but I want to talk about the setbacks. The biggie was being made redundant a year into my first publishing job, which ended up being a valuable turning point—jolting me out of some really bad habits and setting me on a totally different track.

Pre-redundancy, I was like a lot of new starters in publishing—subtly apologizing for myself: beavering away in obscurity, sweating over diary clashes and lost receipts; while deferring responsibility for strategy to my seniors.

There’s nothing like a surprise restructure to knock all that on its head. Suddenly I was on my own, having to assert my worth to the company—and it was a surprisingly affirmative process. A report I’d written on mindfulness and the nonfiction market turned out to be prescient and valuable—and three internal roles appeared in short order. I recognized my worthiness to engage in company strategy, and the necessity of doing so. I also realized that I needed to automate away as much admin from my role as possible so as to make time for this better work.

From that moment onward, I sought to eliminate admin, supported by empowering bosses, and to seek out more growthful work to replace it. Whether it was streamlining our processes through the principles of “lean,” or learning how to conduct user research, I gave thought to who our customers were, how we could delight them, and what was in the way. And I found myself promoted to do more of the same. Door after door has opened for me since. But it required unlearning much of what I’d been taught at school and by a culture that expects new starters to “do their time.”

We need to raise the bar for entry-level jobs. Empowering new starters in publishing to expect more from their roles is one of my greatest joys. A book I wish I’d read years ago and now recommend is Playing Big by Tara Mohr.

“I wanted to solve the industry’s infrastructural problems from within so as to liberate publishers from unnecessary admin, from the bottom up.”Emily Labram

EM: An indefatigable spirit of inquiry. I’ve learned to trust the way I feel in new situations, noticing whenever anything feels “off” or incongruent, and then asking the stupid questions. Inevitably I hit upon assumptions about how things are done, which often deserve being challenged.

My strength is being able to tease all this apart with warmth and tact, until better ways become clear. It has required courage, sometimes; following an inquiry to the CEO and beyond. But there’s nothing I love more than the feeling of teasing apart an “unfixable problem” until the right course of action becomes clear. There’s a sense of congruence, energy, purpose.

EL: People often dodge this question by saying they’re perfectionists, but in my case that’s true and it leads to procrastination, which is my biggest weakness.

If given a vague brief and a generous deadline, I tend to inflate the task at hand to grand proportions—subconsciously. I then feel daunted and put it off until it’s urgent, at which point I’m forced to compromise on the initial vision anyway. If given total autonomy, projects can slide, which leads to shame and disengagement. Yuck!

I’ve learned to interrupt this pattern as soon as possible and notice the perfectionist demands I’m making on myself, instead breaking the project down to manageable proportions. Seeking help from my boss with this has been revelatory, too, as she can catch me before the downward spiral sets in, in a non-judgmental way.

“The successful publisher is getting out of the building, finding the under-served readers neglected by mainstream publishing.”Emily Labram

I’ve been wrestling with these for a while, and the following is my working hypothesis of what the publisher of the future looks like.

This is what we’re putting into practice at Snowbooks, the sister publishing company of Bibliocloud, partly through using Bibliocloud, which has eliminated almost all of our admin. My colleague Tik [Dalton] is doing some fantastic research into reader problems to inform her commissioning, fresh out of university. It’s invigorating stuff.

“Industry-wide education is needed to open publishers’ eyes to what computers can do to transform customer experience and automate our processes.”Emily Labram

EL: In five years’ time, I’d like to have walked the walk when it comes to serving customers and mastering technology. Right now, I’ve put the Net Promoter Score in place at Bibliocloud through quarterly customer surveys, which is a terrific metric. I’m side-by-side with programmers and getting increasingly conversant in code.

Over time, I’d like to help this industry raise the bar when it comes to educating itself about technology and save publishers valuable time, which they can use to do the work that matters. I’d like to explore how I can be a better ally as someone of privilege in the industry. Coaching, mentoring and advocacy will be part of this. It’s likely I’ll start my own venture in future years.

PP: You’ve recently moved from HarperCollins, one of the largest publishers in the world, and now you’re part a now five-person team at Bibliocloud. What tempted you to make the move?

EL: Eighteen months ago I read an article by Emma Barnes at The FutureBook, ‘It’s us in the industry who need to learn to code’, and it blew my mind. A publisher who taught herself to code. I’d known that over-busyness and poor infrastructure were holding the industry back, but I hadn’t hit upon the solution.

I was already working in a tech role as a product manager at HarperCollins, which was brilliant work. But I yearned increasingly to work alongside programmers rather than managing third parties, and to learn to code, myself.

I wanted to solve the industry’s infrastructural problems from within so as to liberate publishers from unnecessary admin, from the bottom up. I wanted direct relationships with customers, independence from shareholders, and the freedom to make a difference.

Bibliocloud has been the perfect next step.