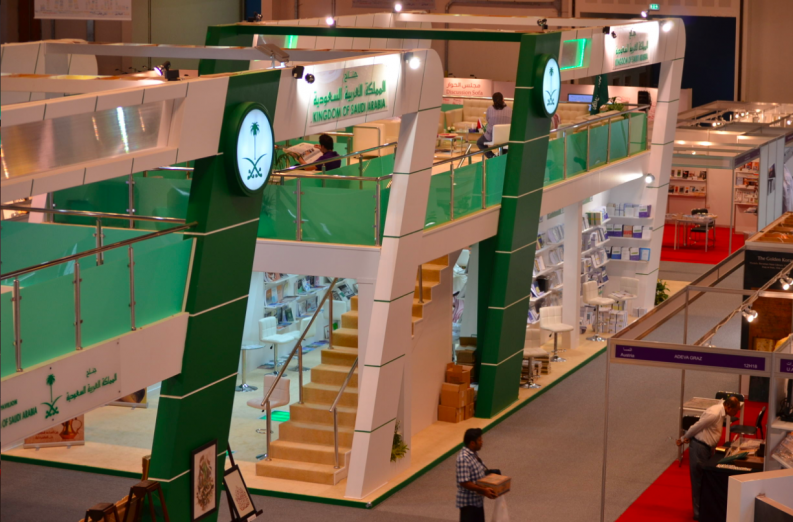 Connoisseurs of publishers’ stands had plenty to feast their eyes on at the Abu Dhabi International Book Fair late last month. The styles varied enormously, from the National Centre for Documentation & Research which had a curved, Star Trek-like central pod, decorated in red and green neon, to a fabulous recreation of the Sheik Zayed Grand Mosque — the famous “white mosque” — with its many domes and minarets where titles about the building and its history were on display. Almost next to the latter was the symmetrical beauty of the stand belonging to the UAE Ministry of Culture, Youth and Community Development, whose sweeping struts rising to a central point was designed, one presumes, to represent a kind of Bedouin tent but was just as likely remind any British visitors of the ribbons looping up to a Maypole.

Towering over all these though, and resembling nothing less than a giant ocean liner that had berthed in the hall for the duration of the fair, was the giant, two-storey colossus belonging to the Kingdom of Saudi Arabia. If there was a stand-off of stands, I think we know who would have been the winner.

But do elaborate stands make a difference?

Is it a mere splurge, or are all these efforts something that might spark the interest of an investor, catch the eye of an author or agent?

At fairs focused on catering to the public, as Abu Dhabi was, it might make a lot of sense for a government ministry to make such a large investment. For publishers, the returns are, like so much book-related marketing, hard to quantify. At professional fairs, where stands are put to use not as display tables for one to peruse the latest offerings, but as a meeting space in which to close deals, well, then why not indulge in a bit of comfort?

Hachette has gone double-decker at Frankfurt, and so has Kobo. And one can never overlook Taschen, who has erected circus tents at Frankfurt and hung 50-foot high reproductions of Helmut Newton’s full-figured nudes from the ceiling.

Random House US once recreated the Sistine Chapel at the old ABA trade show, but has since reduced their stand at BookExpo America to something just slightly roomier than an airplane toilet. Maybe they want to avoid having those horrid unions at the Javits Center extort even more money, but the end result is that their author signings end up interfering with everyone else’s business and it makes them look, well, cheap.

British mind body spirit publisher Hay House likes to have a mini-shrine, complete with running water on its stand — which, while pleasant, is just as likely to have the effect of sending one running off to the aforementioned restrooms…

Whatever you think of them, elaborate stands certainly can make wandering the aisles of any book fair a more enjoyable experience.