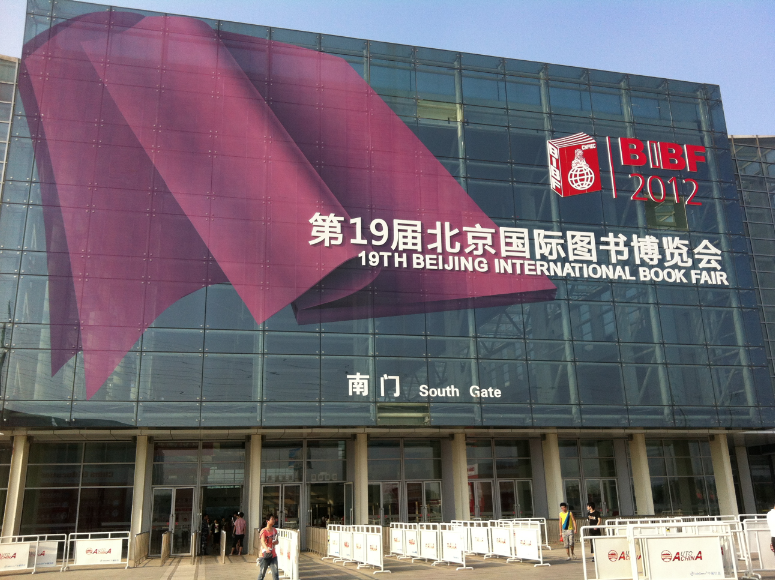 On the morning of August 29th, the opening day of the 19th Beijing International Book Fair, exhibitors and other attendees waited under an oppressive sun for the China International Exhibition Center to open. The huge, air-conditioned venue — spanning over 53,000 square meters — was off limits while important officials received a private tour of the fair, providing a particularly Chinese welcome to European publishing professionals and others who had traveled so far to get there. Fears and concerns in the Chinese publishing world seem to match those of Europe and America, as the title of this year’s edition of the Beijing International Publishing Forum was “Survival and Development of Publishing Enterprises in the Digital Age.” Chinese print publishers are struggling under price pressure from online book retailers. China’s digital progress is currently being led by lucrative mobile operators China Mobile, China Telecom and China Unicom, which all had significant stands at the fair. These digital operators must compete for content, now that Chinese publishers have become cagier about sharing their media content with other parties.

China has experienced impressive growth in the digital market — there are now 536 million internet users, 356 million of whom connect using their mobile phones. According to the General Administration of Press and Publication, the Chinese e-publishing industry increased by 31% between 2010 and 2011.

By Friday, it seemed that there were fewer trade visitors in attendance than last year. The brutal, sauna-like weather could certainly have been a contributing factor, along with the greater distance between the book fair and city center compared to past years. The road to the China International Exhibition Center is usually deadlocked in traffic jams, and the number of taxis in Beijing has been cut by a third to help alleviate traffic. All told, it’s harder for attendees to reach the fair than in years past, and waiting for a taxi can often take an hour or more. But on the positive side, the long waits give attendees the opportunity to meet and sometimes even do business with publishing professionals from all over the world before even arriving at the fair.

The Chinese market is expanding, making it extremely attractive to publishers in neighboring countries. Japan and Singapore both operated large, prominent displays. Countries from even further afield are also keen to enter the market, with Sweden and Turkey exhibiting for the first time in the history of the BIBF.

According to fair organizers, 19 countries were represented with national stands. While figures are not yet available for this year’s fair, in 2011 China acquired a total of 14,708 copyrights from abroad, constituting a 7% increase over 2010, and 2012 continued that growth trend. There were 2,010 exhibitors in total, compared to 1,946 at last year’s fair, and there were increases in both the number of total foreign exhibitors as well as total domestic exhibitors.