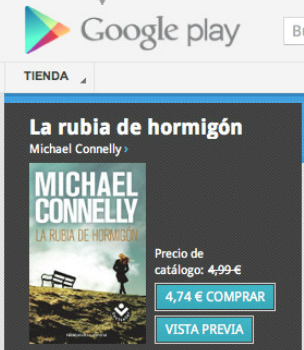 At midnight, when everybody was sleeping or watching the late TV shows, Google Play went live in Spain, on Thursday 14 June, featuring, of course, Fifty Shades of Grey in the main banner. All afternoon and evening — as Spain’s national football team dismantled their Irish rivals on the pitch in Poland — Google Play Spain had been uploading new banners at their online bookstore, but nothing indicated that they were going to go live quite so soon. Since the opening of the German store, just yesterday, persistent rumors had it that the next non-English speaking market would be Spain, but the deep financial crisis the country is going through contributed to generalized skepticism.

There was though a distinctive sign that something important was in the works — silence! — as is typical from Mountain View giant when things get serious. Luis Collado, their main man in Spain, has been absent from the social media for weeks. When approached by Publishing Perspectives as to why, his answer was a laconic “I’m busy — writing a book”.

The store opens with what perhaps is the best selection of titles in the Spanish digital market, and includes several of the big and medium sized publishers, such as Grupo Santillana, Roca Editorial, Random House Mondadori, and Grupo Planeta.

Midnight or no, people have already started to download books and Fifty Shades of Grey is (thankfully) not among the most favored by readers, although the wee hours of the night would seem perfect for the mommy-porn novel by E. L. James. The average price of books downloaded most often thus far are below five euros, underscoring habits imposed by competing e-tailer Amazon.

More to come for our readers when Mr. Collado finishes “writing his book” and finally talks to the press.