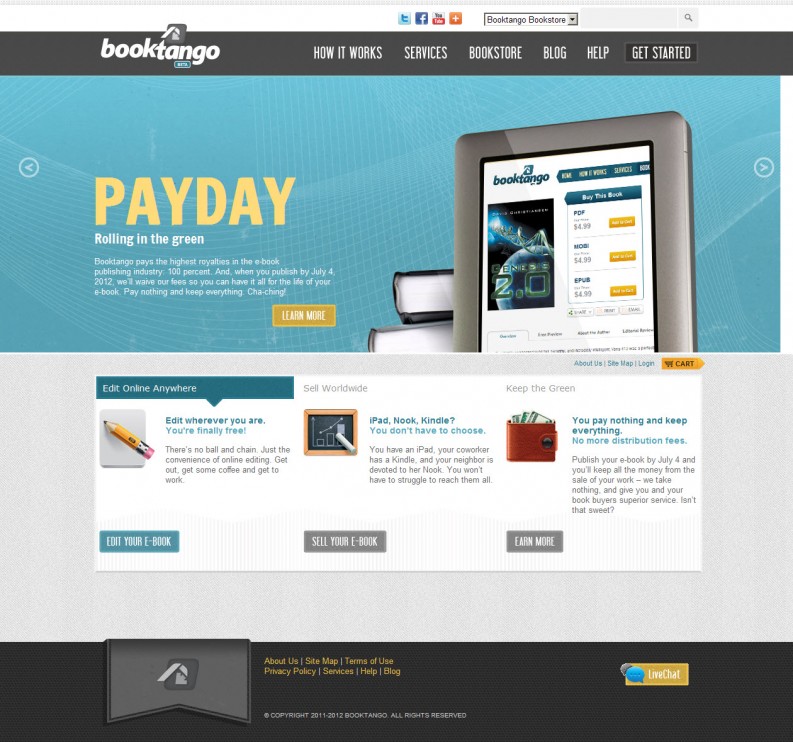 There are a lot of options out there for self-publishers, but representatives of Booktango, a major player in DIY e-book publishing, truly believe their online formatting and editing tools are best-in-class and easiest to use. The service, which is owned by Author Solutions, Inc. (ASI), currently offers a “Freetango” promotion wherein authors who publish by July 4, 2012 will receive the maximum possible royalties from their e-book sales. Authors receive all royalties for e-books sold through the Booktango bookstore, and, as Chris Bass, Director of Marketing for Booktango, explains in a press release: “If it’s sold through another outlet, the e-books retailer takes their standard fee, and the author gets the rest. Booktango takes nothing — no other publishing company is offering anything this beneficial to authors.” Booktango prides itself in its superiority over other multiple-channel distribution competitors in three different ways: an easy-to-use interface, the widest distribution to every e-reader and e-retailer, and the highest royalties.

In addition to its free DIY features, Booktango offers fee-based add-ons, among them book formatting, correction and editing, and promotional services such as virtual book signings and multiple-author webinars.

“At the end of the book signing, every person who attends the event is e-mailed a PDF of a book stub, which allows them to download one free copy of each of the authors’ books,” says Keith Ogorek, Senior VP of Marketing at ASI, in an interview with Publishing Perspectives.

“I think it’s really going to be something authors will use to promote their books,” he adds. “Because you have the opportunity to get your books into the hands of readers in such a way that they’ll start to talk about it—which is one of the keys to helping books spread.”

The Future of Pricing

In response to a question posed recently by Digital Book World, “In three words, what is the future of e-book pricing?,” Ogorek stresses “word of mouth” in conjunction with promotional efforts such as those offered by Booktango. He suggests that when DIY authors must decide on an appropriate e-book price, they should “take price out of the equation” for a short time. He maintains that, as many authors strategize, the first concern is to get the book into the marketplace, even if that means selling it at a lower price. Then, if the book is good, readers will act as a “promotional team” of sorts. Once word of mouth leads to greater demand for the book, the price can be raised.

Ogorek also offers advice for authors who are deciding between using the e-book platform or going the traditional publishing route:

“Traditional publishers right now have cut down their title selections significantly. So if you’ve got a long time to wait and tough skin, then I think traditional publishing’s a good option for you. If you want to have your book available in all formats — hardcover, paperback and digital — you want someone to help you go through the process, which is assisted self-publishing. If you really know what you’re doing and you’re not concerned about limited distribution in terms of just being a digital book, Booktango is the best option out there.”

According to Jane Friedman in the May/June issue of Writer’s Digest, the coming and going of multiple e-book formats across digital readers, devices and services is comparable to the “Wild West.” Ogorek says a better analogy is the evolution of film from 8mm reel, to Betamax versus VHS, to DVDs, and now to streaming videos. He predicts that, in time, there will be one standard format that would allow a person to stream a book on any device—Kindle, iPad, Nook—but it would be housed somewhere “up in the clouds” and wouldn’t actually be downloaded into any particular device.

This is Ogorek’s prediction for future e-book formatting. As for content, he predicts that it will become “richer and more enthralling” as the ability to add video, audio and interactive features becomes more and more commonplace, much in the way Apps became increasingly sophisticated.

Ogorek also predicts that traditional publishing will run parallel to the film industry. Traditional movie studios continued to produce what he dubs “celebrity films” (eg, Spider Man, The Avengers), as they have the size in capital, resources and distribution to do as much. But they also developed partnerships with smaller independent production companies to develop other films that didn’t require a 9-figure investment but still had the opportunity to tell a great story and make money (e.g. The King’s Speech, The Help).

“We’re seeing the same thing happen in publishing right now. Traditional publishers are publishing what I would call ‘celebrity books.’ Simon & Schuster did the Steve Jobs book. I’m not sure a small independent would have the capital resources to meet the demand for that book. While it did sell a significant amount in e-books, it still sold a significant amount in print. And you need the resources of a traditional publisher to acquire the rights, package it up and distribute it.

“But, what you’re also going to see is a significant portion of the revenues are going to come from e-books. They already have started and will continue to do that in the future. The other thing you’re going to see is that in the same way publishers created a relationship with independent film companies and Sundance was born as a way to find new and upcoming talent and ideas, so too will you see traditional publishers doing that.”

Are Self-Published E-books a Bubble?

In response to a recent Guardian article arguing that the DIY e-book boom industry is over-hyped, over-leveraged and an e-book “bubble” likely to soon pop (Ewan Morrison, January 2012), Ogorek states that, instead of an e-book bubble, the current phenomenon is akin to what we saw in the cell phone industry. There’s no threat of a bubble bursting; rather, technology will continue to improve and we will see a consolidation.

“Right now there are a number of people entering the market. But just like you saw with the cell phone market, there were a number of providers—whether they were local, regional, national or even global—and when the business settled out there were only a few large players around the world. I think you’re going to see the same thing in the DIY e-book market.”

Ogorek further connects the e-book and cell phone industries as both stemming from the desire to communicate.

“People started doing e-books, if you will, in the caves, when they wrote pictures on the wall. You follow that through history and you see now there are 180 million people blogging. The desire to continue to write and communicate is something that isn’t driven by technology, but it’s just made available by technology.”

The Guardian article also charged that there’s a dangerous delusion that all self-e-publishers can achieve success, when in reality almost all self-published e-books receive very few readers due to lack of visibility. Ogorek counters that there are other reasons that an e-book may not sell, such as because the topic isn’t relevant, the author doesn’t have a clear picture of who the audience is, or the book simply isn’t well written. He cites Bronnie Ware’s The Top Five Regrets of the Dying as an example of a book that wouldn’t have bubbled up to the surface had there not been the electronic and self-publishing options that we have today. After writing an article in a local publication, Ware published a book through Balboa Press (Hay House’s self-publishing imprint). The book was an internet sensation and was eventually acquired by Hay House (March 2012).

“While not everyone’s going to be Bronnie Ware, I would suggest to you that without the publishing opportunities that exist today because of DIY, Bronnie Ware would never have happened. To me, that’s the story here. It’s not about the failures, but about those who actually succeed because of this opportunity. Who otherwise would not have had the opportunity because there weren’t the technologies like Booktango available.”

Ultimately, Ogorek maintains that this is the best time in history to be an author:

“Because while everyone won’t be successful, everyone will have the opportunity to be successful. And that in itself is something that I think is worth talking about.”

DISCUSS: Are Self-Published E-books a Bubble About to Pop?

Note: Article was corrected to reflect error in earlier version referring to “Betamax versus VCR’s.”